Organic Photovoltaics is a promising young technology - a low-cost, light-weight, mechanical flexible and see-through alternative to Silicon photovoltaics – which hold strong potential to a large range of applications for example in building integrated photovoltaics and in textile integration. On the way to commercialization however, there are still some issues to be resolved, especially the device lifetime, which is much shorter than for Silicon photovoltaics. The lifetime of the devices in normal working environment is severely affected by UV-radiation in combination with oxygen and water (photo-oxidation), which cause changes in photovoltaic properties and hamper their performance over time. In addition, repeated mechanical stress of the flexible solar cells introduces further instabilities in the cells, which until now limits their commercial viability.

The project CompliantPV, recently funded by in total 6 Mio. DKK from the Villum Foundation, aims to target the stability of flexible organic solar cells and improve at the same time both the photo-oxidative and mechanical stability of flexible solar cells by introducing specially formulated stabilizing compounds into the active layers in the cells. The project will ultimately lead to flexible solar cells with drastically improved lifetimes, which is an important step in the further development of the technology. The project is led by the Organic Photovoltaics group at NanoSYD, MCI, SDU, and conducted in close collaboration with DTU Chemical Engineering (Prof. Anne Ladegaard Skov) and the Department of Chemistry at Aarhus University (Prof. Peter Remsen Ogilby). 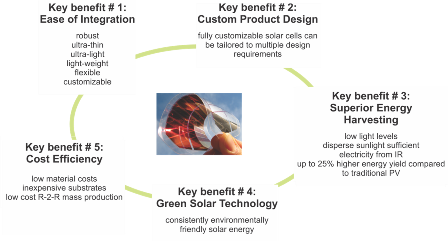 
Back to MCI news