New method may transport medicine better through the body

One of the major challenges in fighting inflammation is to get the medicine transported properly through the body. Now, chemists propose a new method for drug delivery.

At some point every person is likely to experience an inflammatory condition somewhere in the body. The causes of inflammation are very different and the same applies to the treatment. Some types of inflammation disappear by themselves, while others require medical treatment.

Medical treatment only works if the active substances in the medicine are transported to the right place. This is called drug delivery. For example, if a patient needs to have medication directed to the liver, it is important that the medicine is designed so that it is not absorbed before it reaches the liver.

One of the major challenges in the field of drug delivery is to get the active molecules to the right organ, avoiding them to be absorbed elsewhere than the inflammated area. Now, chemist Jasmin Mecinovic from the Department of Physics, Chemistry and Pharmacy, together with his international colleagues, has found a new method of transporting these molecules.

Chemistry that acts as a crane arm

In a study that was recently published in Nature Chemistry, they describe how a so-called ‘slider’ can act as an arm on a lifting crane and in this way collect small packages of molecules. The slider itself is a small molecule.

It can sit on a polymer strand, which mostly resembles boiled spaghetti in its shape. There are lots of polymer strands in organic material, and the slider can therefore jump from one polymer to the next - and even further to more polymers, all while carrying this molecular package with it.

Imagine that the molecular package is a medical element to be transported to, for example, the kidneys, then the slider can transport the package through the body by jumping from polymer to polymer until it reaches the kidneys. This is what Mecinovic and his colleagues found.

Mecinovic, together with his colleagues, has developed a theory for how the slider can in practice use a polymer as a vehicle. The chemical process utilizes a connection with negative and positive charges, which most people know from refrigerator magnets.

The slider's negative ions, i.e. the atoms with an excess electron, will bind to the positive ions on the surface of the polymer. The researchers have discovered that the laws of chemistry allow the slider to jump between several polymers.

The researchers did not just show that it was possible in theory. They also verified the model by using computer simulations that artificially mimic reality. Here, they found that the transport could work in practice. This was subsequently confirmed when the research team tested it with gel in the laboratory in the Netherlands.

One thing is that it works in liquids where polymers float freely, but gel is a harder material that -in many aspects- resembles a human body from a chemically mechanical perspective.

This may lead to the use of Mecinovic and his colleagues' method of producing even more accurate drug delivery to be used in curing inflammatory diseases.

The program is published on 21 January 2019 in Nature Chemistry and is a collaboration between researchers from universities in the Netherlands, the United States and Denmark. Link to article. 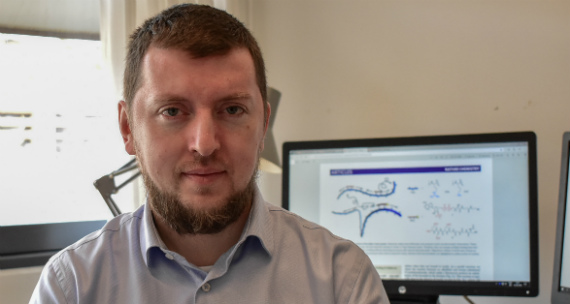