Uncovering the secrets of the deep-sea ecosystem

From March 2nd - April 2nd, 2018, an international team of researchers, led by Professor Ronnie N. Glud, University of Southern Denmark and Dr. Frank Wenzhöfer, Max Planck Institute for Marine Microbiology in Bremen, were on a 32 days cruise on the German research vessel Sonne to the Atacama Trench in the eastern Pacific Ocean. 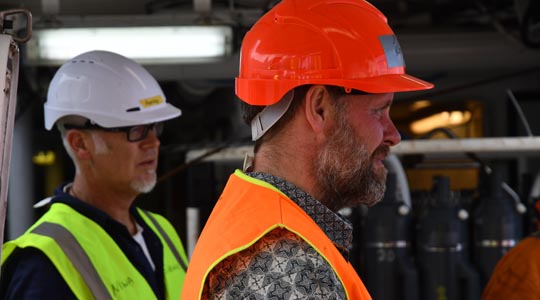 During their cruise, they collected samples from the water column and sediments from the shoulder and the bottom of the 8066 meters deep-sea trench. They covered a transect of 450 kilometres length by sampling 10 sites. Scientists from 15 different nations with a broad expertise in different scientific fields joined their forces to elucidate the biology, bio-geology and transport processes of this uncharted ecosystems.

Now they report some of their findings.

Getting the equioment ready for a dive.

Ronnie Glud and Frank Wenzhöfer both agree that the expedition was a great success. Their goal is to understand the trench system in its whole. The scientists could collect large amounts of samples from the seafloor and the water column. They charted the seafloor with bathymetry and they recorded video streams and photos with high resolution cameras.

From these data they were able to identify fish species in several depths. Ronnie Glud says:

- Looking at our results from all sites at the Atacama Trench we find a very high biological activity in the trench. At the bottom it was much higher than on the shoulders. These trenches are indeed biological hot spots.

- On this expedition we were following a holistic approach. To our knowledge this is the first expedition to a deep-sea trench of this kind. Our scientific crew members are specialists on their fields: taxonomy, microbiology, molecular biology, biogeochemistry and oceanography. We wanted to find out, how this deep-sea system works. Any life in this depth of more than 8000 meters has to be adapted to the high pressure and to find its niche. Our questions were what food sources for the communities and how microbial activity is cycling the elements. The food web of the trench: From the very small to the big sizes

The start of the food web is the action of photosynthetic organisms in the sunlit upper layer.These microscopic organisms are the food source for other species.

As the coastal waters of Chile and Peru are influenced by supplies of cold nutrient-rich waters from the deep sea to the surface, the growth of the photosynthetic microorganisms should be boosted. As a consequence, the Atacama Trench should benefit from this material flow from above.

The trench is assumed to contain large deposits of organic material, funneled down from trench slopes and overlying waters. In order to get the full picture, all processes involved have to be studied.

The different size scales observed by the scientists cover a range of more than 10 billion: From the microscopic scale with small virus particles (1/10 of a micrometer) to bacteria (micrometer), meiofauna (millimeter), macrofauna (centimeter), megafauna (meter) to transport processes across thousands of meters.

On each of the 10 different sites in and close to the Atacama trench the team collected samples and also measured the oxygen profiles in the water column and in the sediments. 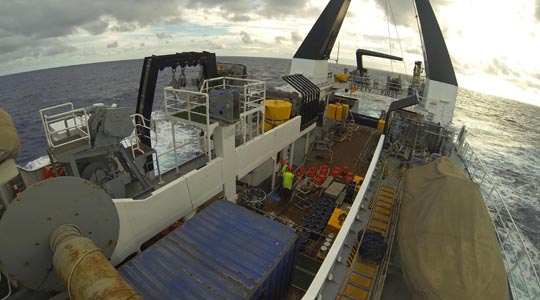 The project involves exploration of several deep sea trenches. This photo is from the cruise to Kermadec Trench, earlier this year.

Oxygen is a very powerful agent used by microbes to gain energy out of organic matter. The more active the microbes in the sediments, the earlier the oxygen is consumed. This is demonstrated by a steep decline of the oxygen profiles.

- However, when comparing different sites at 8000 meters, the oxygen penetration depth and other parameters also showed an unexpected high variation indicating a variation in biological activity and local variations in the delivery of organic matter. We speculate that two main processes are responsible for this pattern, first it can be a local variation in the biomass production in the upper part of the water column, or material transported from the shoulders of the trench by seismic activity.

Funding of the cruise

The cruise is part of Professor Gluds’ larger European Research Council Advanced Research Grant project HADES-ERC, aimed at understanding bio-geo-chemical processes and microbiology at the bottom of deep areas of the oceans.