Henrik Dam has a packed schedule ahead of him, attending meetings all over Denmark. But he has also agreed to be a bartender at the start of semester party in February 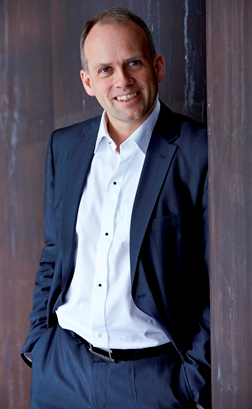 Although officially Henrik Dam has only just taken up his post as Vice-Chancellor of the University of Southern Denmark, he actually jumped the gun slightly.

In fact, he has been attending ongoing meetings since November with the University’s Board of Governors, management and other employees, and he has been getting acquainted with student representatives and the union representative. And he has had a lot of conversations with the outgoing Vice-Chancellor, Jens Oddershede.

“I’ve got a lot to learn,” Henrik Dam admits. He cites two major upcoming tasks for the next few months:

A lot of people to get to know

“First of all, I need to get to know people. That applies to employees and students at the University, but also all our business partners,” the new Vice-Chancellor explains. So far, his induction process involves 45 meetings and events.

“The next task is to ensure that the University now starts to implement the strategy adopted by the Board of Governors just before Christmas, setting objectives through to 2020,” Henrik Dam explains.

Not from an academic family

The new Vice-Chancellor does not come from a family of academics. And, in his opinion, the University of Southern Denmark does not face extra challenges because it has more students from non-academic backgrounds than other universities.

“Actually, that presents different challenges than having students from academic backgrounds. The latter group might have particular expectations, whereas the University is in a better position to shape people who are setting foot in a university for the first time,” he points out.

Region in need of a boost

Henrik Dam is keen for the University to continue working closely with the business community in the Southern Denmark Region.

“I look forward to a dialogue about how we can best serve one another so that, together, we can give the region a boost,” Henrik Dam explains. However, he has also reserved a slot for a rather more intriguing task in the immediate future.

On 15 February, he has agreed to serve behind the bar when the students put on a party to mark the start of the semester. It might be possible to get an idea of how this goes via Twitter, where the new Vice-Chancellor has set up a profile – https://twitter.com/DamRektorSDU