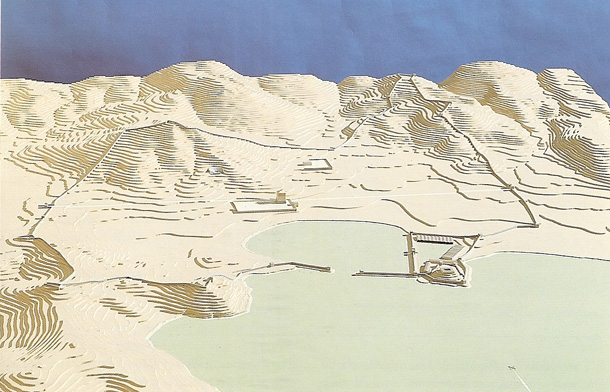 The Maussolleion at Halikarnassos was built ca 360-350 BC as the monumental tomb of Maussollos, the Hekatomnid satrap and governor of the Persian king. It is situated in the center of the newly re-founded city of Halikarnassos in one corner of a large monumental terrace of about 242m x 105 m (fig. 1). The entrance to the terrace was from a large entrance building on the east wall of the terrace probably leading from the main square, the Agora, of Halikarnassos. Along the north side of the terrace ran the main street of Halikarnassos. It had a width of ca. 15 m and headed directly towards the main west gate of the city, the Tripylon Gate or Myndos Gate. This street still constitutes to-day the main street of Bodrum, the Turgut Reis Caddesi. The Maussolleion was built in a rectangular cutting in the bed-rock measuring about 32.5 x 38.5 m. (fig. 2 and 3). The building consisted of three main parts: a tall Podium, which carried a temple-like structure with 11 x 9 Ionic columns, ca 10 m in height and a roof consisting of 24 large steps of marble (fig. 4). 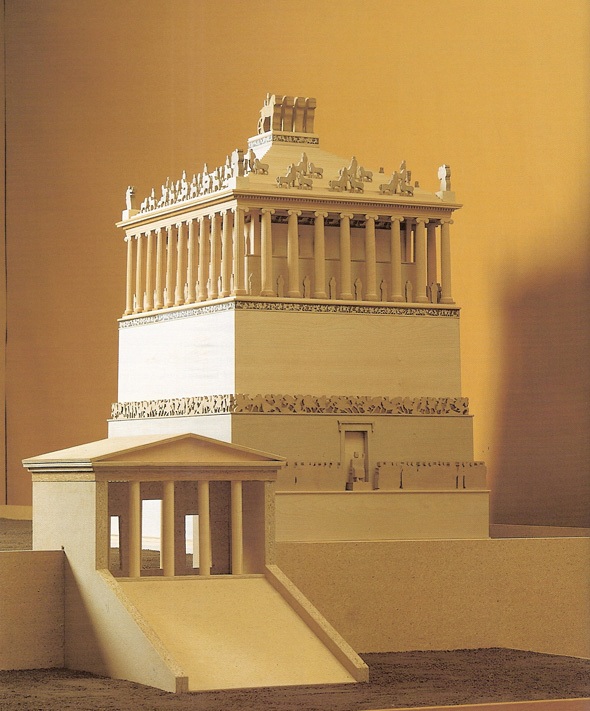 The building was richly adorned with a huge amount of sculptures created by a number of the most famous Greek sculptors of the Late-Classical period: Skopas, Leochares, Bryaxis, Timotheos and possibly Praxiteles. Except for the big quadriga on top of the Maussolleion, the lions along the roof and the Amazon frieze it is still discussed precisely how the remaining groups of sculptures should be distributed on the building.

The Maussolleion at Halikarnassos was included in the list of the Seven Wonders of the World no doubt mainly due to its sculptures.

The Maussolleion stood for many centuries - perhaps well into the 12th century - and is believed by some to have collapsed due to an earthquake about that time. From the time of the Renaissance the building and its owner was of interest to Boccaccio and other Renaissance humanists (Luttrell (1986) 163) and paradoxically imaginative reconstructions of the Maussolleion and Halikarnassos began to appear at about the same time as western crusaders utterly destroyed the remains of the Maussolleion in order to have building materials for the construction of the Castle of St. Peter.

The fundamental modern research on the site of Maussolleion was carried out by a British expedition lead by C.T. Newton in 1857-58 with additional investigation under the direction of A. Biliotti in 1865. The site was re-excavated by Prof. Kristian Jeppesen and a Danish team in 1966-77 and during these works a concise plan of the building site (“the Quadrangle”) was produced for the first time (fig. 2). By this and the painstaking study of thousands of fragments from the excavation site and in the British Museum, Jeppesen managed to produce a far more varied and detailed evidence for the reconstruction of the monument. By combining the physical evidence from the excavations and the descriptions of Halikarnassos and the Maussolleion by Vitruvius (De Arch 2.8.10-15) and Pliny (NH 36.30-31), Jeppesen produced the most well-founded reconstruction of the huge monument till now (fig. 4).

There are, however, still uncertainties and problems, which cannot be solved from the existing evidence and new suggestions for a reconstruction of the Maussolleion appear now and then, most recently one by prof. W. Hoepfner in 2013.  The Maussolleion at Halikarnassos is unique within Greek architecture and sculpture. The importance of the monument and its cultural context at the end of the Classical period is increasingly acknowledged. In spite of all the work and research already done since the Renaissance, it will continue to fascinate and keep scholars occupied and produce new insights into the formation of the Hellenistic era.

Literature on the Maussolleion is enormous and only some basic works are mentioned here.

C.T. Newton, assisted by R.P. Pullan; A History of Discoveries at Halicarnassus, Cnidus and Branchidae. London 1862.

The Maussolleion at Halikarnassos. Reports of the Danish Archaeological Expedition to Bodrum. 7 vols.

Volume 2; K. Jeppesen & A. Luttrell, The Written Sources and their archaeological Background. Aarhus 1986.

Volume 4; K. Jeppesen, The Quadrangle. The Foundations of the Maussolleion and its Sepulchral Compartments. Aarhus 2000.

Volume 5; K. Jeppesen, The Superstructure. A comparative analysis of the architectural, sculptural, and literary evidence. Aarhus 2002.

Volume 6; J. Zahle & K. Kjeldsen, Subterranean and pre-Maussollan Structures on the Site of the Maussolleion. The Finds from the tomb chamber of Maussollos (D. Ignatiadou and V. Nørskov). Aarhus 2004.

G.B. Waywell, The Free-standing Sculptures of the Mausoleum at Halicarnassus. London 1978.

B.F. Cook; Relief Sculpture of the Mausoleum at Halicarnassus. Oxford 2005.

Some recent books and articles:

I. Jenkins; Greek Architecture and its Sculpture in the British Museum. London 2006.

P. Pedersen, “The 4th century BC ‘Ionian Renaissance’and Karian Identity” in: O. Henry (ed), 4th century Karia. Defining a Karian Identity under the Hekatomnids. Paris 2013, 33-64. (With an appendix on the pre-Maussollan water systems at the Maussolleion site).