After obtaining the PhD, Daniel Wüstner joined the group of Professor Frederick R. Maxfield at the Weill Medical College of Cornell University, USA, where he contributed to the development of optical microscopy tools for visualization of cholesterol trafficking in living cells. Subsequently, he returned to Germany for further postdoctoral studies in the field og computational biophysics in the group of Dr. Heinz Sklenar at the Max Delbrück Center (MDC) in Berlin. Here, his research focused on image-based modeling of sterol and lipoprotein transport in cells and on Monte Carlo simulations of membrane structure. He was awarded fellowships from the Deutsche Forschungsgemeinschaft (DFG) during his PhD studies and from the Damon Runyon and the Helmholtz foundation during his postdoctoral studies.

In 2005, Daniel Wüstner joined the Department of Biochemistry and Molecular Biology at SDU as an assistant professor. In 2009 he was promoted to associate professor. He serves as executive board member of the SDU eScience Center, an activity for boosting high-performance computing in natural sciences, and he has established collaborations with academic and industrial scientists in and outside Denmark.

A full list of publications by Daniel Wüstner can be found here. 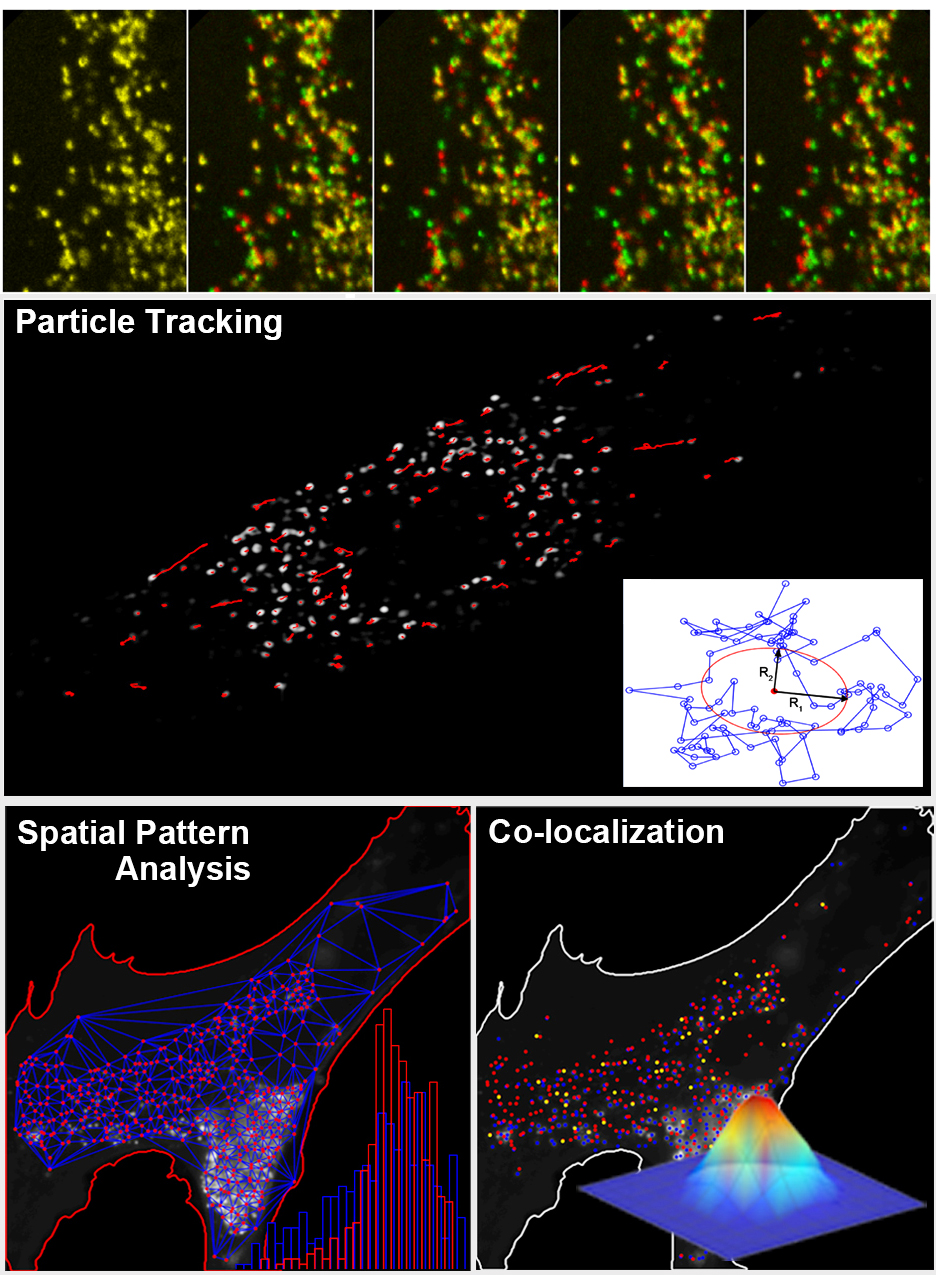 Our group develops and applies optical microscopy and imaging techniques to study lipid and protein trafficking in living cells. Lipids are often considered as passive solvent for membrane proteins in the cell. However, lipids serve many additional functions, ranging from cell signaling over regulation of inter-organelle transport to control of cell division and migration. Many human diseases are associated with malfunction of lipid metabolism, often resulting in pathologic lipid accumulation in particular cellular compartments. Also, some neurodegenerative diseases in which mutated proteins tend to aggregate directly affect lipid metabolism. Our group uses fluorescent lipid probes with minimal chemical alteration to track cellular lipid trafficking with high spatial and temporal resolution. In addition, we develop computational imaging approaches for tracking protein and lipid disposition in human disease models ranging from lysosomal storage disorders over atherosclerosis to neurodegenerative diseases.

Lysosomal accumulation of cholesterol and sphingolipids is a hallmark of Niemann Pick type C (NPC) disease but also observed in other disorders. Within this project we aim for a mechanistic understanding of lysosomal cholesterol export. Using time-resolved image cytometry, we follow lysosomal routing of cholesterol analogs derived from the plasma membrane and mobilization of sterol from intracellular stores by labeled NPC proteins. For that purpose, we synthesize suitable sterol probes and use quantitative fluorescence microscopy combined with automated image processing using SpatTrack, an imaging toobox, we recently developed. In collaboration with the group of Christer Ejsing quantitative mass spectrometry is applied to determine metabolic fates of the used cholesterol analogs as well as their eventual effects on the metabolism of other lipids. We also use fluorescent tagged lipoproteins with dyes attached to the apoprotein as well as fluorescent cholesterol and its esters inserted into the lipoprotein particles. The aim of such studies is to develop a kinetic map of intracellular sterol trafficking in healthy and NPC-disease affected cells. The project is funded by the Danish Research Council, the Lundbeck foundation and the NovoNordisk foundation. 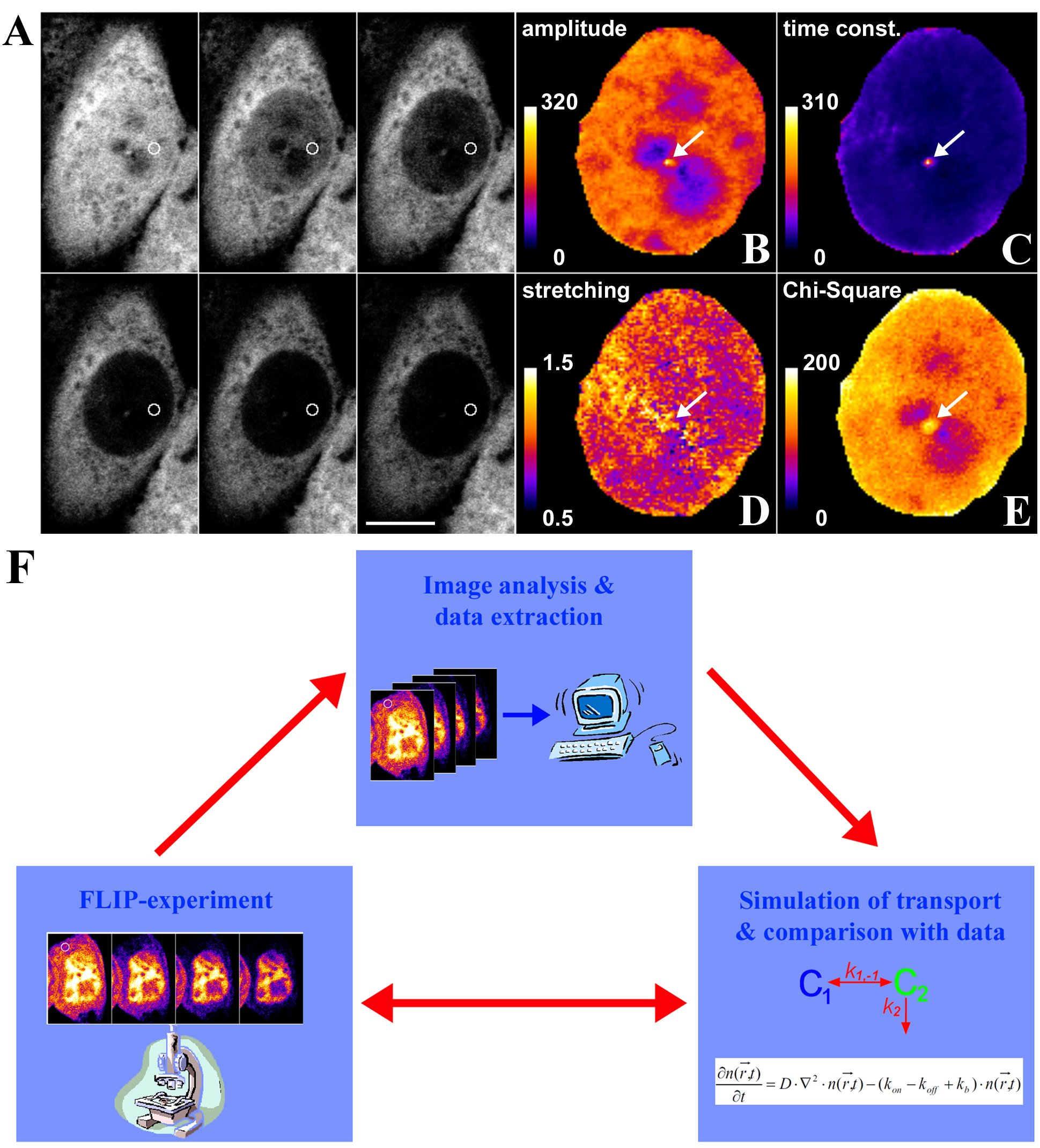 Sterol distribution and transport across the plasma membrane
The majority of cholesterol in mammalian cells as well as of ergosterol in yeast cells resides in the plasma membrane. The lateral and transbilayer orientation of these sterols in the membrane is a matter of debate in current models of biomembrane architecture. Similarly, the mechanisms underlying sterol uptake and transport into cells are poorly understood at a molecular level. Quantitative imaging of intrinsically fluorescent analogs of cholesterol and ergosterol in mammalian and yeast cells allows us to directly address these questions. In particular, we use pulse-chase studies, photobleaching microscopy and image correlation techniques to reveal membrane organization and dynamics of cholesterol and ergosterol analogs but also to determine their transport itineraries and trafficking kinetics in living cells. The project is funded by the Villum foundation.

Modeling of photobleachingmicroscopy for analysis of protein and lipid transport
Photobleaching, the light-induced destruction or chemical alteration of fluorescent probes is often considered as a limitation in quantitative live-cell imaging studies. However, it can be used to advantage to follow intracellular transport kinetics in techniques, as fluorescence recovery after photobleaching (FRAP) and fluorescence loss in photobleaching (FLIP). Moreover, it can be applied to distinguish probe fluorescence from autofluorescence in living cells. Incollaboration with experts from in- and outside Denmark, as Achim Schroll and Daniel Sage we develop computational methods for quantification and modeling of photobleaching processes. This includes bleach-rate based image segmentation to reject cellular autofluorescence and determination of time-integrated probe emission using the Java-based tool PixBleach but also pixel-by-pixel modeling of FLIP data for inferring intracellular transport parameters. In addition, we develop stochastic methods for extracting transport parameters from live-cell FRAP experiments. The project is partly funded by the SDU eScience Center.

SpatTrack is a MatLab-based standalone software for quantitative analysis of vesicle distribution and motility in living cells. SpatTrack collects a variety of algorithms, has user friendly GUI’s for each function and allows for batch processing of large data sets.

SpatTrack has been developed by Frederik W. Lund and Daniel Wüstner for reliable analysis of complex imaging data generated by fluorescence microscopy of living cells. The software and workflow is described in the paper Lund et al., Traffic, 2014.

Highlights of the SpatTrack program are:

Unzip the archives to get two folders, one containing the program and the license agreement, the other containing test images to be used together with the User Guide located in the same folder. SpatTrack is compiled as 64-bit Windows version and does not require MatLab (The Mathworks Inc.) to be installed on your computer. However, you must download and install the MatLab compiler runtime (MCR) on your computer.

SpatTrack uses the following files developed by other MatLab users: