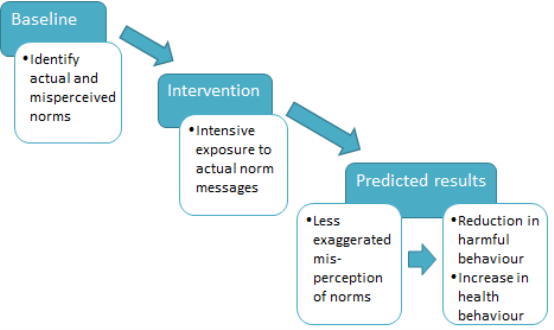 Alcohol is still a commonly used substance among adolescents and is known to be related to severe consequences such as missing class, getting into fights or damaging property. Also, research shows that young people tend to overestimate alcohol and other drug (AOD) use in their respective peer group. Such misperceptions are predictive of higher rates of personal AOD use. According to social norms theory challenging misperceptions about peers’ alcohol behaviour would lessen the social pressure on individuals and in turn decrease consumption. Even though interventions based on social norms theory are widely used for adolescents under 18 years only a few are evaluated in Europe with rigorous research methods and under controlled conditions. While some of the existing trials containing social norms components show promising effects, other studies failed to find significant preventive effects among young adolescents aged 13-14 years. A previous Danish trial concluded that misperceptions of peers’ risk behaviour related to AOD use existed among pupils aged 11-12 years, but the study was inconclusive regarding the effect on alcohol consumption. Further, within the last decade, the age for initiating drinking in Denmark has increased, suggesting that norm perceptions among older adolescents may be more relevant to study.

In order to add to the evidence base on the effectiveness of social norms interventions in secondary schools in general and specifically in Denmark the school-based social norm intervention, The GOOD life was developed targeting Danish pupils in grade 8 and 9. The GOOD life intervention was designed to overcome several shortcomings of some of the previous social norms programmes, namely a too short duration of exposure to messages, lack of interactivity and engagement of pupils or using only one communication channel resulting in limited reach