The western necropolis outside the Myndos Gate

Ancient Halikarnassos had burial places both inside and outside the city wall. One of the largest and best preserved burial grounds is situated immediately outside the western city gate, the so-called Myndos Gate.

During excavations and restoration of the Myndos Gate in 1998-2000 an extensive ancient necropolis with at least 22 monumental tombs and a large edifice built in large ashlar blocks were revealed. About that time Hotel l’Ambiance Resort was built and the tombs are now standing around and close to its large swimming pool. Generally, the tombs are well preserved and they are in every respect exceptional both as to their size, embellishment, and inscriptions. Even though no traces of skeletons or grave goods have been preserved, the tombs offer a rare insight into the people living – and dying – in Halikarnassos from the late 2nd to 5th century AD. These buildings are evidence of wealthy families, and the tombs seem to support the theory that Halikarnassos was a prosperous city during the late imperial period and Late Antiquity.

The monumental tombs are arranged so as to face two almost parallel east-west-oriented grave streets to the north abutted by a north-south-oriented street from the south. Some tombs are free-standing buildings, others are built together forming a row. They are mostly built of rubble and mortar together with some reused ashlar blocks of bluish limestone. The walls of some of the tombs were originally covered by plaster of which only small remains are preserved, e.g. Tomb 2.

Two main types may be distinguished among the tombs. Six of the tombs had a pronaos/anteroom in front of the burial chambers (hyposoria), so-called temple tombs (nos. 1, 2, 4, 7-8, and presumably 21). Three of these tombs have preserved mosaics in the pronaos (nos. 2, 7-8). Tombs 4 and 21 probably had one as well although no traces of the mosaic are visible today. Six of the tombs in the necropolis consist of one burial chamber (no pronaos) below an upper barrel-vaulted room, so-called podium tombs (nos. 10, 12, 14, 18-19). The hyposoria are usually barrel vaulted. A rather small square door gives access to each of the rooms that often have low benches made of mortared rubble. These hyposoria were closed by heavy ashlar blocks. On top of the burial chambers several of the tombs had a single larger room likewise spanned by a barrel vault. 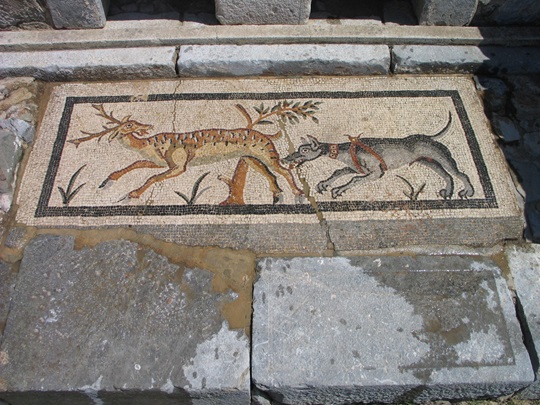 Tomb 2 is located in the north-eastern corner of the necropolis and facing towards the south. The tomb is a temple type with a small figured mosaic panel in the anteroom depicting a hunting scene: a dog chasing a stag. Parallels for the mosaic would indicate a date in the second half of the 3rd or beginning of the 4th century AD – and the construction of the tomb itself should presumably also be dated in this period.

Tomb 7 is the last tomb preserved at the western edge of the necropolis. It is facing towards the south. Although the mosaic floor of the anteroom is partly ruined, partly covered by a later construction, it is possible to get an impression of the overall design: three panels with geometric motives surrounded by an ivy leaf border. Panels with tangent circles flank a central panel with an inscribed circle with rows of adjacent scales radiating from a central flower. In this case the anteroom with the mosaic seems to have been a later addition to the tomb. Parallels indicate a date for the mosaic in the 4th - 5th century AD.

Tomb 8 is the largest tomb in the necropolis and stands in the western part of the east-west-oriented street. The tomb is facing towards the north. It is a temple type, and from the anteroom steps lead down into the grave chambers. The large anteroom contains a mosaic floor with three panels surrounded by an ivy-leaf scroll. Both the central panel with wine tendrils emerging from a krater and birds eating from bunches of grapes and the two flanking panels with thyrsoi refer to the Dionysiac world. An opening of a terracotta pipe is placed slightly off-centre in front of the left burial chamber, presumably for libations. Parallels for the mosaic would seem to indicate a late antique date for the construction of the tomb, presumably 4th or 5th Century.

Inscriptions
During the cleaning of the tombs five epitaphs with inscriptions on large ashlar blocks were revealed, one still in situ. The inscriptions define ownership and indicate that the tombs were reserved for the family and had room for several burials. They also define the rules for the tomb, some with very specific imprecations or curses.

Survey results 2013
During survey work in 2013 the necropolis was recorded with total station and camera producing wireframes and 3D models. A wireframe of the site and a sample of a simplified low-resolution 3D model of the graves 1 to 5 are available for download below. For reference see Mortensen and Bargfeldt 2016.

B. Poulsen: The necropolis outside the Myndos Gate in Halikarnassos – monuments and mosaics, in Death and Burial in Karia, eds. E. Mortensen & B. Poulsen, Halicarnassian Studies VI, Odense 2016, 11-108.

N. Bargfeldt & E. Mortensen: The necropolis outside the Myndos Gate in Halikarnassos - surveying and drawing, in Death and Burial in Karia, eds. E. Mortensen & B. Poulsen, Halicarnassian Studies VI, Odense 2016, 109-119.

B. Poulsen: Halikarnassos during the Imperial period and Late Antiquity, in Labraunda and Karia, eds. L. Karlsson & S. Carlsson, Uppsala 2011, 424-443.