Skip to main content
The Faculty of Engineering Our Global Goals

The Danish robotics environment will get a global showcase when the European Robotics Forum in 2023 takes place in Odense. 800 guests from the international robot industry are expected to the city, hosting the event for the second time.

Universal Robots (UR) had not yet been sold for millions to American Teradyne, and other Funen robot companies such as On Robot and Mobile Industrial Robots (MIR) had not been founded at all. That was the status last time a European summit for robotics professionals took place in Odense back in 2012.

The European Robotics Forum (ERF) is now returning to Odense and Denmark with the participation of up to 800 robotics experts. The University of Southern Denmark has attracted the conference to Odense with local support from Odense Municipality's Invest in Odense, the Danish robot cluster Odense Robotics and the Danish Technological Institute, which arranged the conference in Odense in 2012.

The robot cluster in Denmark has meanwhile grown to be the largest in Northern Europe and today holds an internationally leading position within areas such as drones and mobile and collaborative robots, with more than 10,000 employees and 430 companies.

The news was unveiled on Wednesday night in Rotterdam, where the University of Twente is hosting this year's European Robotics Forum, the largest robotics conference in Europe.

We are very happy that the European Robotics Forum will be back in Odense after 11 years. The Maersk Mc-Kinney Moller Institute is one of the founding members of euRobotics. A crucial element in building a strong international network across the European robotics society is the opportunity to meet

Also participating was a delegation from the partnership behind next year's Danish edition, spearheaded by the University of Southern Denmark. Professor Christian Schlette from the Maersk Mc-Kinney Moller Institute at SDU is pleased that the large global network meeting will move to Odense in 2023.

- We are very happy that the European Robotics Forum will be back in Odense after 11 years. The Maersk Mc-Kinney Moller Institute is one of the founding members of euRobotics. A crucial element in building a strong international network across the European robotics society is the opportunity to meet. ERF always feels more like a family gathering than a conference, and we look forward to having our longtime partners and friends visit - as well as giving young talents the opportunity to experience the community, says the SDU professor, who is a formal host and has played an important role in getting the ERF back to Odense.

He was also elected to the board of euRobotics during the week. (photo)

UR and MIR are today company abbreviations that robotics people around the world decode without problems, and the robotics environment in Odense has gained international recognition. Therefore, it is only natural that euRobotics will once again hold its annual meeting in Odense on 14-16 March 2023. 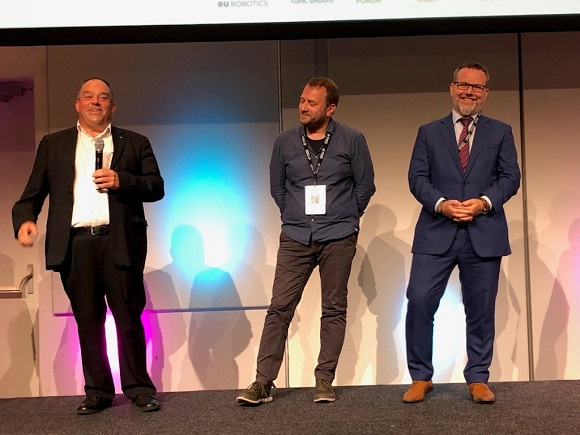 According to the plan, the new Odeon Concert Hall will be the center of the conference when researchers, developers, directors and decision-makers discuss current trends and new solutions within robot innovation and artificial intelligence.

The application from SDU has been prepared with support from Invest In Odense, the Danish Technological Institute and the robot cluster Odense Robotics. Here, director Mikkel Christoffersen is very excited that Odense will once again be the host city for the European robot industry's biggest meeting.

- It is an acknowledgement of Odense's and Denmark's international leadership position in robot technology. At this particular conference, the world's leading robotics researchers outline future developments, which will be of great importance to the Danish robot industry. Here, Denmark's robot, automation and drone companies can gain insight into future research trends - and showcase their technologies to academics, investors and end users. It is a unique opportunity for robot companies to get closer to landmark research and accelerate their innovation, says Mikkel Christoffersen.

The European Robotics Forum is Europe's largest robotics conference. ERF is arranged by euRobotics and takes place once a year - next year with SDU as host in Odense.

The first time was back in 2010, when the first European robotics meeting took place in San Sebastian, Spain. Two years later, the summit visited Odense. Here, there was particular interest in the Funen robot comet Universal Robots and the academic robotics environment at the Maersk Mc-Kinney Moller Institute at SDU.

This year, the ERF takes place in Rotterdam, where it was revealed on Wednesday evening that the host city next year will again be Odense - it is the first time that a city will be hosted for the second time.

The University of Southern Denmark has attracted the robot summit to Odense with support from Odense Municipality's Invest In Odense, the robot cluster Odense Robotics and the Danish Technological Institute.