- a late-antique building in Halikarnassos 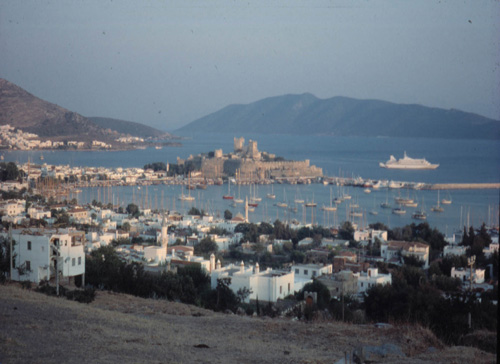 During four campaigns (1990-1993) the remains of a late-antique domus with four floor mosaics was excavated in Bodrum. The project was directed by P. Pedersen, and the excavations were conducted from the Department of Greek and Roman Studies at the University of Southern Denmark on behalf of the Museum of Underwater Archaeology in Bodrum. The author was field director of the excavations of the late-antique building situated on a protected plot of land located immediately to the west of the Coban Yildizi street, about 200 m west of the west wall of the Maussolleion terrace.

Before Danish-Turkish excavations started work in the protected site in 1990, great activity had been displayed in the area of the late-antique building. Already by the end of the second campaign it had become clear that the excavated structure formed part of a "Roman Villa" revealed by C.T. Newton in 1856 and exemplarily published in 1862. Furthermore it soon appeared that this site was identical with the burial ground mentioned by Newton since graves had been sunk into the mosaic floors of room F, G and K. This burial ground had been out of use and forgotten for many years when this attractive site in the centre of modern Bodrum was sold. Without knowing what was beneath the surface, the new owner started building a house on the site. Already during the establishing of the foundations of the house in the beginning of the 1980'es, it became clear, that the plot was covered by mosaic floors, and the Bodrum Museum of Underwater Archaeology became involved. The keepers of the Museum, Dr. Aykut Özet, Dr. Aynur Özet and Bahadir Berkaya, undertook investigations on the site clearing room G anh H and smaller areas related to these rooms. By this occasion drawings were made of some part of the mosaics in the two rooms. The mosaics were afterwards covered with gravel and the entire area secured for further archaeological investigation. 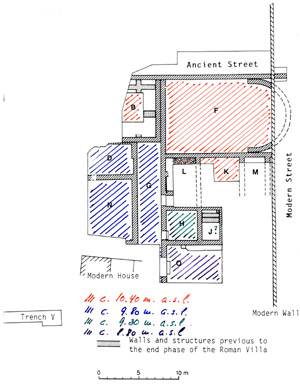 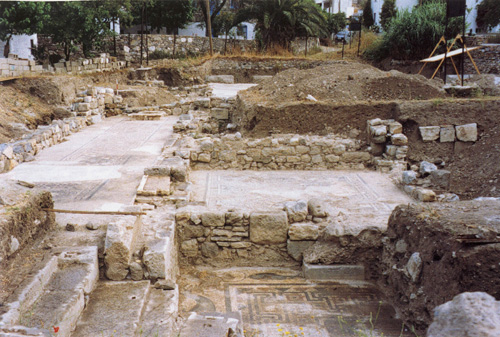 The site is to the east bounded by the modern street, Coban Yildizi Sokak, to the south and north by smaller private roads, and to the west by a private property. It measures approximately 25 m eat-west and 40 m north-south. Large foundation trenches had been dug in the western part, and in the southern part of the area a small house had been erected (in the 1980'es). In the western (room N) and in the southern part of the plot (room J and O) some strong modern concrete foundations had been laid out in connection with the construction of the new residence. The local authorities removed some of these foundations, when the new excavation started in 1990, and the only concrete foundation left is the one in the northern part of room O. Due to these building activities, the site appeared rather hilly with undulating levels, and the only ancient structure being visible when the new excavation started in 1990 was the top layer of the above-mentioned ashlar walls. The mosaics from room F and K were covered by a layer of soil and rubbish being only c. 0.70 m thick, the one of room O c. 1.80 m. This excaved part includes nine rooms, some of which have only been partly excavated. They are grouped around two small yards and contain mosaics. A large apsidial room (F) with representations of hunting scenes and a dedicatory inscription. The inscription informs us that a certain Charidemos paid for the embellishment and we may assume that he was the owner of the Building.

A room (B) only partly excavated as its eastern part continues below the neighbouring plot; a long corridor (G) mainly decorated with geometric mosaics; a small paved yard (L); part of two rooms (K and M); part of room (D) with no remaining floors; another yard (N); an almost square room (H) with geometric patterns, and part of a large room (O) with a huge treshold leading to corridor (G) and containing a representation of a nereid king riding on an ichthyocentaur playing the cithara. 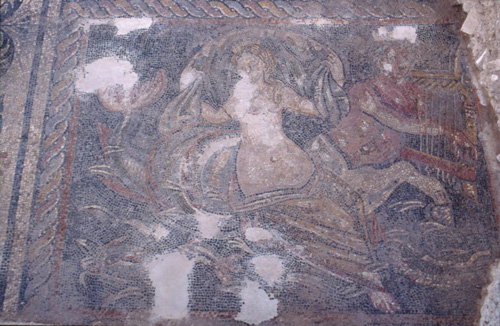 In his search for the Maussolleion Charles T. Newton started to excavate on the field of Hadji Captan in the western part of the city of Bodrum towards the end of 1856. As we know Newton did not succeed in finding the Maussolleion in this part of the town and instead he found and investigated several rooms with mosaic floors belonging to a large "late Roman villa".

The building excavated by Newton included five rooms connected by two long corridors: an almost square room (A) originally with a shallow basin in the middle; an oblong room (B) with mythological huinting scenes; an apsidial room (C) with a representation of a goddess carried by Tritons in the apse; a partly excavated room (E) with personifications of Halikarnassos, Alexandria and Berytos; and two corridors (a and b) surrounding an irregular room (D) with a well and containing mosaics representating Europa and the bull and several Dionysiac scenes. Newton was not able to determine the original limitations of the building; only to the north had he discovered a strong ashlar wall. He could neither extend his excavation further east due to the location of a cemetery, nor to the west and south since this was the property of Hadji Captan.

That the two sets of rooms are indeed part of the same building is indicated partly by the eastern walls of room (F) and the corridor (G) which are coinciding with the western walls of Newton's room (B) and (D), partly by the corrspondence in style, composition, and choice of motives of the mosaic floors. Included by the Roman villa excavated by Newton, the building covers a total area of more than 1400 m2. According to the style of the mosaic floors and the content of the inscriptions, the large building was constructed somewhere around the mid-5th or even second half of the 5th century AD.

So far it has been impossible to determine when or why this late Roman building was abandoned. There are no traces of fire but in the apsidial room (F) fallen tiles and bricks mixed with stucco was observed. However, since only a few utensils and fragments of the interior embellishment have been found during the excavation, the building seems to have been abandoned before it collapsed. 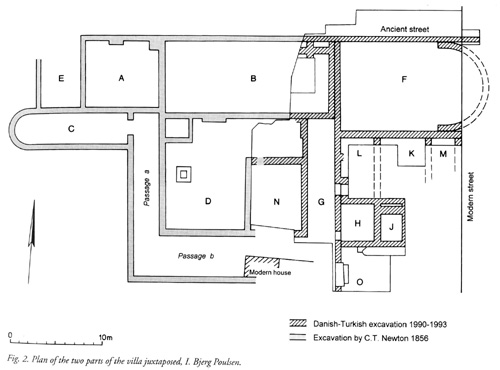 Since the inscription in the tabula ansata includes the word domos the building should be interpreted as a house and the rich embellishment seems to indicate that it belonged to a wealthy owner. Although Newton published the excavated part as a "Roman Villa", the entire building included also the part found during the Britsh excavations and will be published under the title "THe House of Charidemos. A late-antique building in Halikarnassos". A publication of the building is presently being prepared: The building with its floor mosaics will be published by B. Poulsen, the inscriptions by S. Isager. The volume will also include some of the finds as well as chapters on mosaic workshops in the region and the development of Halikarnassos during the Roman Imperial period and Late Antiquity.

Hinks 1933
R.P. Hinks, Catalogue of the Greek, Etruscan, and Roman Mosaics and Paintings in the British Museum, London 1933.

Poulsen 1997
B. Poulsen, The city personifications in the Late "Roman Villa" in Halikarnassos; in: Patron and Pavements in Late Antiquity, eds. S. Isager & B. Poulsen, Odense 1997, 9-23.

Poulsen 1997
B. Poulsen, The Sculpture from the Late Roamn Villa in Halikarnassos; in: Sculpture and Sculptors of the Dodecanese and Caria, es. I. Jenkins & G.B. Waywell, London 1997, 74-83.