This is a press release produced by GEOMAR Helmholtz Centre for Ocean Research Kiel.

If carbon dioxide concentrations in the atmosphere and thereby in the ocean continue to rise, this could favour the mass development of toxic algae, with far-reaching consequences for the pelagic food web. 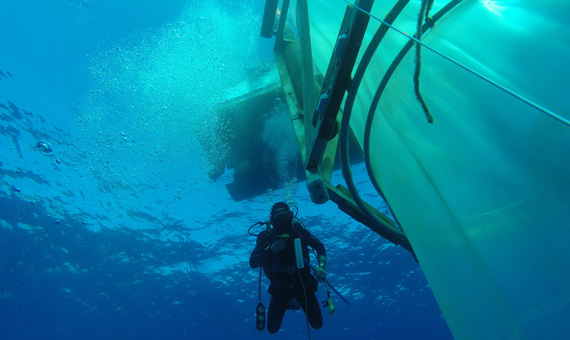 This was discovered during a long-term experiment off the Canary Islands conducted by an international group of scientists led by the GEOMAR Helmholtz Centre for Ocean Research Kiel. The results have now been published in the international journal Nature Climate Change. Carolin Löscher, postdoc, Department of Biology at SDU, is co-author.

Global warming is undoubtedly the best-known consequence of rising greenhouse gas concentrations in the atmosphere. But it is not the only one. The higher the carbon dioxide (CO2) level in the atmosphere, the more CO2 is taken up by the ocean. In seawater the gas triggers chemical reactions that increase seawater acidity.

This process, known as ocean acidification, affects marine life. The consequences for marine ecosystems can be quite complex and research is still in the process of understanding the full scope of it. 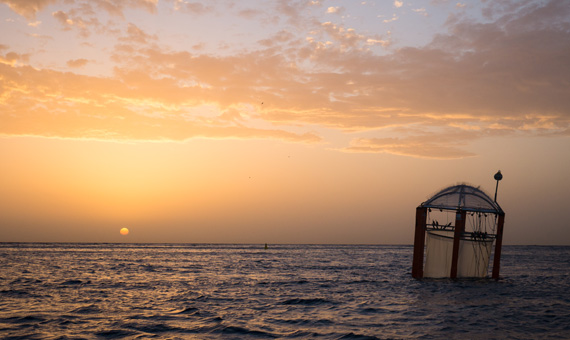 Experiment off the Canary Islands

In a two-month field experiment off the Canary Islands, an international group of scientists led by the GEOMAR Helmholtz Centre for Ocean Research Kiel has uncovered a possible consequence of ocean acidification that could massively affect the marine food web.

As the team has now published in the international journal Nature Climate Change, the toxic alga Vicicitus globosus strongly increased its abundance at carbon dioxide concentrations above 600 ppm (parts per million) and went into mass development above 800 ppm. 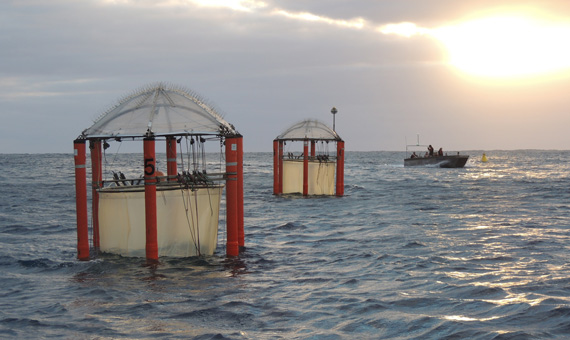 "In our near-natural test environments these algal blooms had a strong negative effect on the rest of the plankton community, particularly the diverse groups of zooplankton. These tiny animals are extremely important for the marine food web. The collapse of the food chain also influenced other important processes driven by the marine biota, such as the carbon transport to depth," explains Prof. Dr. Ulf Riebesell, Professor of Biological Oceanography at GEOMAR and first author of the study.

For the experiment, the team had deployed nine sea-going mesocosms off the Canary Islands. Each consists of a flotation frame at the sea surface, which holds a 15-metre-long plastic tube vertically in the water. The tubes contain 35 cubic meters of seawater with the natural plankton community enclosed. 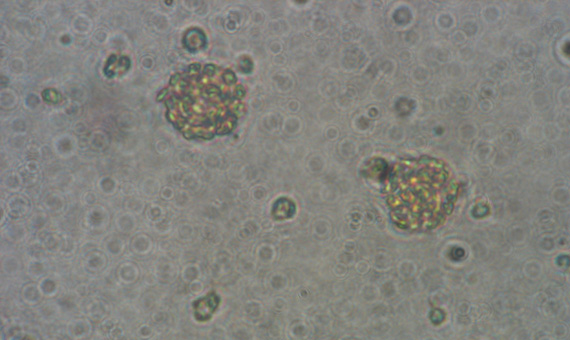 Separated from the surrounding sea, the enclosed water column was enriched in CO2 to levels expected for different CO2 emission scenarios. The researchers then closely monitored the development of the plankton community for the following 57 days.

The various groups of phytoplankton and zooplankton in the mesocosms showed a wide range of responses to the elevated carbon dioxide and increased acidity. The most striking response, however, was the rapid growth of the toxic alga Vicicitus globosus at CO2 concentrations above 600 ppm.

"This CO2 level could be reached in the next three to four decades if our carbon dioxide emissions are not declining rapidly," stresses Ulf Riebesell.

Why does the toxic algae thrive so well?

The exact cause for the success of Vicicitus globosus under high CO2 conditions has not been identified yet. Either the alga benefits disproportionately compared to other competing species in terms of its growth rate, for example through increased photosynthesis under elevated CO2. Or its toxicity increases with rising CO2, so that it is eaten less. 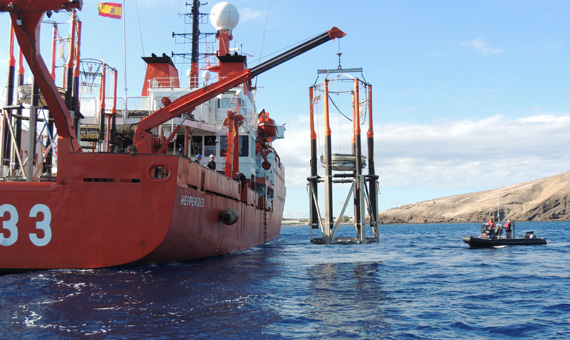 It is uncertain also whether the results of this study can be transferred to other toxic algae species. Still, Vicicitus globosus is distributed widely, from temperate regions to the tropics. Blooms of this species have repeatedly been associated with fish mortality in coastal waters and aquacultures.

"This is the first evidence from a field study that ocean acidification can promote toxic algal blooms. Another strong reason for rapidly reducing CO2 emissions," Professor Riebesell summarises the new findings.

Participants in the study
Besides GEOMAR, the Biological Station Trondheim of NTNU (Trondheim, Norway), the Alfred Wegener Institute Helmholtz Centre for Polar and Marine Research in Bremerhaven, the Instituto de Oceanografía y Cambio Global (IOCAG, Las Palmas, Spain), the Medical University Wenzhou (Wenzhou, China) and the University of Southern Denmark (Odense, Denmark) participated in the study. The experiment was supported by the Plataforma Oceánica de Canarias (PLOCAN). The project was funded by the Federal Ministry of Education and Research within the BIOACID joint project (FKZ 03F06550).

Carolin Löscher is an assistant professor at Dept. of Biology. Her research is focused on understanding and reconstructing the relationship between environmental change and biological evolution.