Where on Earth can we store carbon?

Most people think of tropical forests when they think of carbon sinks – ecosystems that are capable of taking up and storing large amounts of carbon.

But tropical forests are only the 5th most efficient ecosystem when it comes to storing carbon.

The ecosystem storing most carbon per area is actually tundra, followed by seagrass meadows, mangrove forests and salt marshes. 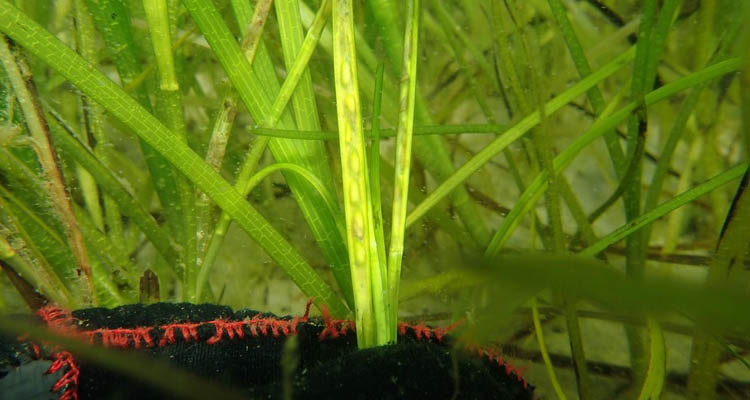 Scientists from University of Southern Denmark want to find efficient ways to plant seagrass in the seabed. 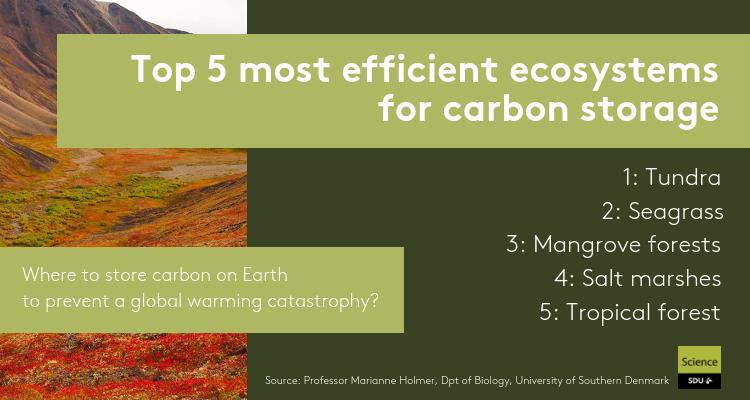 According to UN Intergovernmental Panel on Climate Change (IPCC), urgent and unprecedented changes are needed to avoid a climate change catastrophy.

We need to find ways to drastically reduce the emissions of greenhouse gasses to the atmosphere.

Efforts are already being made to reduce the production of greenhouse gasses but in order to meet the needs, these efforts are by most prognoses not enough.

Hence it is relevant to find ways to store carbon and thus prevent it from entering the atmosphere, contributing further to global warming.

There are several ecosystems on Earth that efficiently store carbon. In principle, all living organisms like animals, plants, algae and bacteria, consist of carbon and thus function as a carbon sink as long as they live.

As long as a tree lives it takes up and stores carbon – but if we chop down the tree and turn it into firewood, its carbon will be released and emitted into the atmosphere as CO2.

A forest is an efficient carbon sink, but only limited carbon in stored in the forest floor. Tropical forests are only the 5th most efficient type of carbonstorage.

Tundra is the most efficient per area as a large part of the carbon is stored in the frozen soil. Now, when the poles are melting, also the tundra is threatened by climate change and carbon storage capacity is decreasing rather than increasing.

Next candidate on the list holds much more potential: Reestablishment of seagrass meadows.

Seagrass plants have an eminent capacity for taking up and storing carbon in the anoxic sediments.

Seagrass meadows are under pressure

Meadows of seagrass thrive in many parts of the world, but they are under pressure and actions need to be taken to preserve and reestablish seagrass meadows, says professor Holmer.

Seagrass thrives in the coastal zone, and has the potential to grow along coastlines all over the world and is now expanding in the Arctic as the ice is melting and is recovering in many areas after reduced nutrient loading.

Professor Holmer: However, overall seagrasses are in recession on a global scale and actions are needed to avoid further loss of these valuable ecosystems.

Carbon is buried in the sediment

Seagrasses are not seaweeds, but plants with flowers, leaves and roots just like plants on land. They produce seeds that can be sown in the seabed or small shoots can be planted by divers for restoration of seagrass meadows.

There are approx. 60 seagrass species in the world. In temperate areas, eelgrass (Zostera marina) is a common species.

Seagrasses are not only efficient carbon holders as long as they live. When the plants die, the plant material is buried in the sediment. In this process carbon also gets buried and thus stored in the sediment rather than emitted to the atmosphere.

Carbon can remain in the sediment for hundreds of years due to the anoxic environment.

Marianne Holmer is professor and head of Department of Biology, University of Southern Denmark.