An Associate Professor at the Department of Biochemistry and Molecular Biology has just received DKK 12.3 million from the Novo Nordisk Foundation. The grant will go towards microscopes used by researchers from all over the world.

Jonathan Brewer is an associate professor at the Department of Biochemistry and Molecular Biology (BMB). He has just received DKK 12.3 million from the Novo Nordisk Foundation. The grant is to be used to buy and develop four new microscopes which are used by researchers in Denmark and abroad. The microscopes can see details of 40 nanometres in living cells and create 3D images. The technology is widely used by researchers to study everything from cancer cells and 'drug delivery' (how medicine is transported in the body) to the development of artificial human skin. 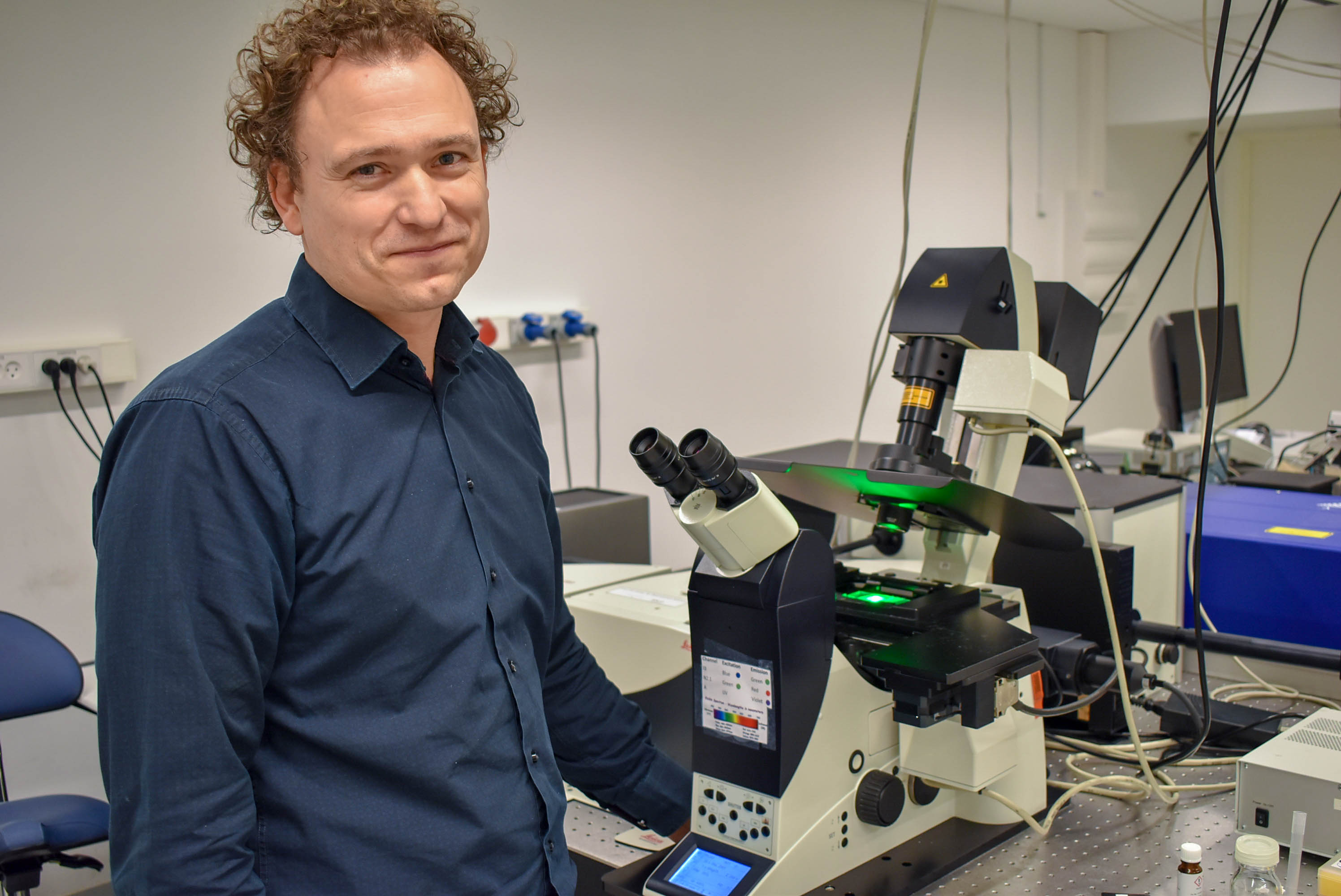 Photo: Jonathan Brewer in front of one of his microscopes, which will be upgraded thanks to the grant from the Novo Nordisk Foundation. Credits: Majken/SDU.

From physics to biology

Jonathan graduated as a physicist from SDU. He received his PhD in 2007 after working in biophysics for 3 years. Afterwards, he continued his academic path with a post doc and assistant professorship before reaching associate professor, which he became in 2016. Although Jonathan's education was mainly focused on physics, he developed an interest in biology and in particular the intersection between biology and physics. He is especially interested in how advanced technology and scientific methods can be used to solve problems in any area.

Jonathan's career activities include visiting the research group of Nobel prizewinner in chemistry Stefan W. Hell, who in 2014 received the prestigious prize for his work with fluorescent microscopy at super high resolution.

"I visited Stefan Hell's research group before he won the Nobel Prize, and it was extremely educational and inspiring to be in his research environment," says Brewer.

Research leader at BMB and Director of DaMBIC NAT

Jonathan's research is driven by curiosity. When he encounters a problem or is puzzled by a phenomenon, his approach is always to find a scientific method that can provide an answer to his question.

His interest led him to work with microscopes. He buys advanced microscopes then further develops them himself. The microscopes can produce 3D images and can therefore recreate not only the cells themselves but also their content.

In addition to being a researcher, Jonathan is also leader of his research group at BMB, where they research in biophysics, nanotechnology, optics and 'bioimaging', which includes 3D images of cells. Jonathan is particularly interested in skin and has recently experimented with creating artificial skin, which - if it works - can be used on burns victims so that they can avoid having to go through skin transplants.

Aside from his role as research leader, Jonathan is also the director of the research centre DaMBIC NAT, which is part of BMB. DaMBIC stands for Danish Molecular Biomedicinal Imaging Centre, and NAT indicates that the centre belongs to the Faculty of Science. The centre is around 8 years old, and although Jonathan has been there from the beginning, it is only two years ago he became Director.

Jonathan recently received the Novo Nordisk Foundation's infrastructure grant of DKK 12.3 million. The grant will mainly go towards three microscopes. The first is a 'super resolution' microscope that can take pictures in 3D and see down to 40 nm, which is 10 times smaller than a light particle. The microscope's extremely high resolution means that it can see details in living cells, and not only in static material. The second is a 'confocal' microscope, which is also used for 3D images, but at ordinary resolution. In addition, he will build a completely new microscope for which he will use a new technologydeveloped by Eric Betzig, who along with Stefan W. Hell also received the Nobel Prize in Chemistry in 2014. As well as the three microscopes, Jonathan also has an AFM (Atomic Force Microscope). The AFM can take pictures with atomic resolution using a needle that is so thin that there are only a few atoms at its tip and measures the atomic force underneath.

Jonathan was born in Belfast in Northern Ireland in 1975. He lives in Odense and is married to Tine Stengaard Brewer and has three children. Before he moved to Denmark, he lived in the USA and the UK.

Responsible for page: Administration of the Faculty of Science