Scientists to explore the depths of the Atacama Trench

The aim of the expedition is to explore life at 8,000 m water depth and to understand the importance of the trench for regional carbon and nitrogen cycling.

On March 2nd, an international team of researchers, led by Professor Ronnie N. Glud, University of Southern Denmark and Dr. Frank Wenzhöfer, Max-Planck-Institute for Marine Microbiology in Bremen, will embark on a 32 days cruise on the German research vessel Sonne to the Atacama Trench in the Pacific Ocean. 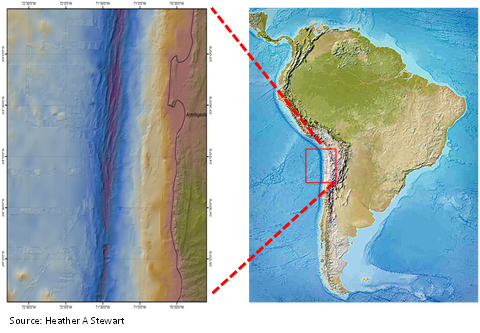 There are 27 deep sea trenches in the world. On his next expedition, Professor Ronnie N. Glud and his fellow scientists will investigate sites in the Atacama Trench off Chile. Depths of the target stations will range between 1,000 – 8,065 m.

Atacama Trench, located off the coasts of Peru and Chile, is one of the deepest ocean trenches in the world and has a maximum depth of 8,065 m. It is almost 6,000 kilometers long.

The cruise is part of Professor Gluds’ larger European Research Council Advanced Research Grant project HADES-ERC, aimed at understanding bio-geo-chemical processes and microbiology at the bottom of deep areas of the oceans.

Microbial communities play an important role for the function of the global ocean and for life in oceans and on land.

The researchers will investigate a number of sites along the trench with an array of remotely operated instruments.

Taking probes of sediment at almost 10.000 m in the Kermadec Trench. From an expedition in December 2017.

- The deep oceanic trenches are some of the least explored habitats on Earth and presumably host many unknown life forms. Recent investigations indicate that even though the seabed at these depths is exposed to extreme hydrostatic pressure, the trenches represent areas of intensified biological activity in the deep sea, says project leader Professor Ronnie N. Glud, University of Southern Denmark.

- Innovative in situ technologies will be used to explore this extreme marine environment usually ignored because of the technological challenges at this great pressure. We will use a variety of autonomous systems (called landers) to investigate microbial processes directly at the seafloor, says Dr. Frank Wenzhöfer, Max Planck Institute for Marine Microbiology.

The Atacama Trench lies under one of the most productive oceans in the world and therefore the researchers expect it to contain large deposits of organic material, funneled down from trench slopes and overlying waters. 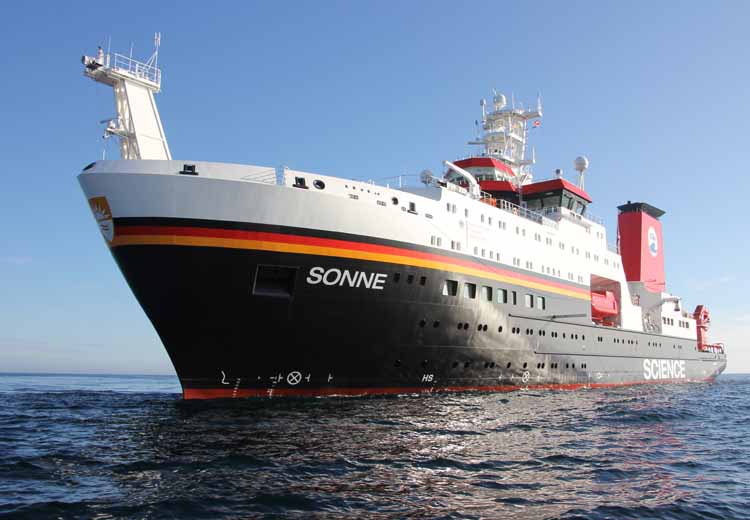 German research vessel Sonne will be home and work place for the crew during the voyage to Atacama. Photo: Oliver Zielinski, ICBM.

- We expect that the trench sediment will host significant anaerobic degradation of organic material, which makes it a unique site for investigating processes of nitrogen cycling and sulfate reduction at extreme pressure – processes that are presumably mediated by completely unknown microbial communities, said Professor Glud.

Specific questions addressed during this cruise are

- What are the sedimentary processes providing food for the hadal community in the Atacama Trench?

- How do abundance, diversity and community structure of microorganisms, meio- and macrofauna in the Atacama Trench differ from those in less productive trenches and nearby abyssal and shelf sites?

- What are the general biogeochemical characteristics of the surface and deep sediment and water column in the eutrophic Atacama Trench?

- Which mineralization pathways are responsible for organic matter breakdown in the eutrophic Atacama Trench?

In 2010, Professor Ronnie N. Glud participated in a Japanese led expedition to the Mariana Trench, retrieving sediments from the deepest spot on Earth, The Challenger Deep at almost 11,000 m depth. He found a surprisingly high microbial activity in the hostile high-pressure environment (pressure is almost 1,100 times higher than at sea level). He has since participated in several cruises to hadal trench systems.

In 2017, Professor Ronnie N. Glud led an expedition to Kermadec Trench, retrieving sediments from 9,994 m and exploring conditions in a trench characterized by a relatively low input of organic material.

Apart from the upcoming expedition to Atacama Trench, he will also investigate the Japan Trench.

Read more about the project