Parasitic worms can pose a serious threat to the Dungeness crab, a commercially important fishery species found along the west coast of North America. The worms are thought to have caused or contributed to the crash of the crab fishery of central California during the last half century. New research shows that infected crabs can rid themselves of parasites by moving into the less salty water of estuaries. Low salinity kills the worms creating a parasite refuge for the crabs. 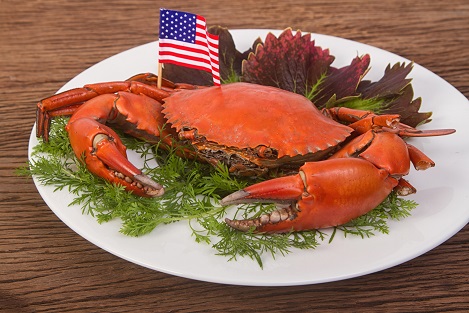 The large Dungeness crab (Metacarcinus magister) is an important source of income for fishermen along the west coast of North America from Alaska to California. The crab has been fished for centuries, but starting in the 1950s something changed.

Many fishing grounds off California saw disturbingly declining crab numbers, lasting for years. Off San Francisco, for example, crab landings have only recently begun to return to their previous levels.

It was discovered in the late 1970s that the crabs of central California were heavily infected by the parasitic worm Carcinonemertes errans.

“My research shows that the C. errans thrive on their hosts in the salty ocean, but when the crabs move to less salty water, the worms die. The low salinity of the estuaries effectively cleans the crabs from parasites”, says Paul Dunn, a postdoc at the Department of Biology, University of Southern Denmark.

The parasitic worms spread from one crab to another during mating, and when they have established themselves on a female, they begin to eat her eggs. A female crab can carry up to two million eggs, and a worm will eat around 80 eggs during the two months she carries her eggs. It takes a lot of parasites to threaten the crab’s reproduction - but that is exactly what is thought to have happened in certain areas", explains Dunn.

While working on his PhD at the University of Oregon, he discovered that Dungeness crabs staying in estuaries were infected with far fewer parasites than their fellows in the open sea.

Estuaries offer a completely different environment than where land and sea are abruptly separated. When a river flows into an ocean it results in an area with large fluctuations in water temperatures and salinity. Some species are able to live in this ever-changing environment or move between ocean and estuary without being damaged. The Dungeness crab is one of them.

"I decided to investigate this further, and found out that the parasites cannot tolerate the low salinity in estuaries. Out in the open sea, where salinity was 30-33 ppt the parasites were fine, but when salinity fell to below 20, they began to die. While the worms die within a matter of days at salinity 10, their crab hosts can survive at salinities as low as 8 for extended periods."

These lower salinities were not as big a problem for the crabs. They can survive for several days at salinities as low as 8.

“So if the crabs stay in the less salty water of the estuaries for at least a few days, they will likely be rid of many of their parasites. The lower the salinity where the crab is, the faster the worms will die", concludes Dunn.

He and his colleagues also examined the possible effects of temperature changes, but they had little effect on the worms' survival.

"Salinity plays the important role. In Oregon, crabs move freely in and out of the estuaries, and our research shows that this could be one reason they carry fewer parasites than the crabs off California", he says.

Dungeness crabs thrive in eelgrass meadows, and they typically grow to 20 cm wide. A third of its weight is made up of delicate, white meat.

Other investigators have previously demonstrated that other species can experience similar salinity refuges from their parasites.  For example, Virginia oysters (Crassostria virginica) are cleared of their parasite Haplosporidium nelsoni, when occupying certain areas of estuaries, and the same applies to the crabs Panopeus obesus, Rhithropanopeus harrisii and Callinectes sapidus and their crustacean parasites of the genus Loxothylacus.

Paul Dunn has published his research in these scientific papers