ComputerWeekly reports on the SMOOTH project.

In collaboration with Rambøll and MIR, Danish researchers will build a data warehouse that will increase the possibilities with position data.

SDU puts eyes and ears on the robot

Researchers at SDU have managed to make a mobile robot capable of interacting with people.

New MADE project approved: MADE FAST

The Manufacturing Academy of Denmark (MADE) has initiated the new project called MADE FAST (Fleksibility, Agility, Sustainability og Talent). The project has a total budget of DKK 265 millions, where The Innovation Fund Denmark invests DKK 79,8 millions.
SDU Robotics participates in the large project together with other universities, GTS institutes, educational institutions, industrial organisations and 50 companies.

Read more about MADE FAST (in Danish).

The project was also mentioned in Fyens Stiftstidende (in Danish).

An SDU Robotics article awarded prize for best paper in 2018 by Nordic Ophthalmological Monthly Journal. The article “ Kunstig intelligens og screening af diabetisk retinopati ” was published in the december issue of Oftalmolog (link in danish), and concerns the use of AI and deep learning in screening for diabetes related eye complications. The article was written by Jakob Andersen and Thiusius Rajeeth Savarimuthu in collaboration with Jakob Grauslund from the Department of Ophthalmology at Odense University Hospital in connection with Jakob’s PhD project Artificial Intelligence Image Diagnostics.

Even though diabetic retinopathy is the most common cause of vision loss among the adult population in the western world, it is well known that 90% of such cases can be avoided by timely screenings and treatment. Due to the increasing diabetes epidemic, a problem has emerged in regards to ensuring the necessary resources and professional expertise in order to offer screenings for those in need. Using so called deep learning algorithms, it has recently been possible to solve tasks thought to be too complex for computers only a few years ago. Deep learning is a type of machine learning, which relies on deep, artificial neural networks that can learn anything from driving a car through busy city streets, to identifying disease in medical images.

ReconCell succesfully finalized: New technology for flexible assembly are on the way to applications

In April 2019, the EU project ReconCell  (A Reconfigurable robot workCell for fast set-up of automated assembly processes in SMEs, 2016-2019) had its final review. In ReconCell SDU-Robotics together with four other research institutions and a number of companies have developed tools for more flexible robot solutions. These will allow for faster set-up times that are in particular important for small batch size production that many SMEs perform. In ReconCell a fully flexible and self-adjusting robot cell has been developed (see here for a video). SDU-Robotics has contributed with work on computer vision, calibration and the automated design of fingers for grippers. Sub-components of the system are already available products such as the adjustable tripod. The overall system will be further developed in different projects to fully reach the market. 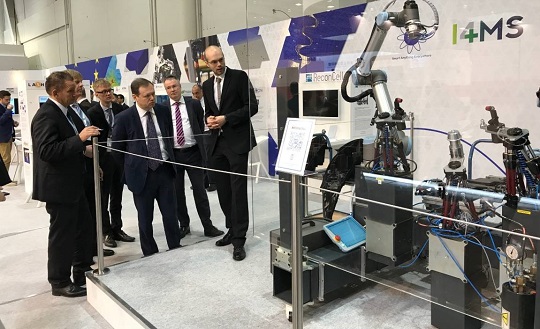 Human-like robots that service the elderly in care centers are not just around the corner due to the technical complexities involved, but small non-android robots are easier to accept as well as to build. SDU Robotics has just received DKK 2.5 million from VolkswagenStiftung, an independent German funding organization, to develop rather simple robots for elderly care. In the project, RethiCare, promising robot-prototypes robots will be designed in co-operation with The Bauhaus University Weimar and the Technical University of Leipzig as well as elderly centers in both Denmark and Germany. Design students will investigate the processes in elderly care homes and the nursing staff will tell about their need for relief in everyday life. We at SDU Robotics can assess where the technical possibilities will give the greatest benefit. As examples of robot solutions for the elderly, Norbert Krüger points to the seal Paro, which is used for people with dementia, the intelligent bed Insyde, which combats ulcers by sensors in the mattress recognizing the lying person's position and proposing a new and soothing position or a spoon developed by the company Liftware, which compensates the tremor of Parkinson patients and by that facilitates eating. All these solutions are quite simple and therefore also stable in use. We believe that there are many other solutions. And finding these "golden nuggets" is one of the goals of the projects.

The robot setup developed in the FlexDraper project has in fall 2018 been moved from Terma Aerospace in Grenå to the SDU Robotics Lab in the TEK building in Odense. With this move we can now accelerate our developments in both the original FlexDraper project, but also the maturing of technologies in the new FlexDraperProduct project. 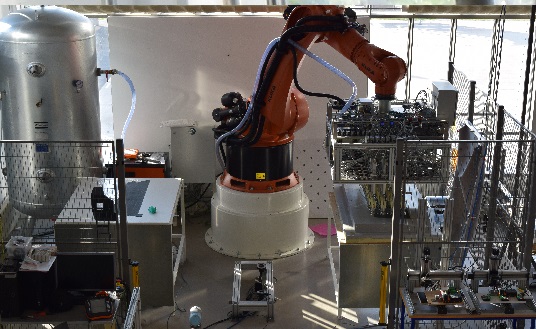 With a weight of almost 2½ton and a payload of up to 320kg the setup is by far the largest standalone robotics setup at TEK.

In competition with ca. 250 applicants, SDU Robotics was selected as one of the 16 teams to participate in the Assembly Challenge at the World Robot Challenge taking place October 17-21, 2018 at the Tokyo Big Sight conference center in Japan, see http://www.worldrobotsummit.org/en/wrc2018/industrial/.

The Assembly Challenge is a competition that addresses automation of a selection of assembly operations found in industry. The challenge involves pick and place operations, screwing operations, two-handed operations, handling of flexible parts, bin picking problems, the fully automated assembly of products as well as adaptions of product assembly sequences to new parts and part variations on short notice.

With the support of SDU's I4.0 Lab, we go into this challenge with a newly designed setup of a highly flexible robotic assembly cell that will then be duplicated and rolled out to form the core of I4.0 Lab's production line.

On 13 September, we hosted a visit by a delegation of the organizers of the World Robot Challenge from Japan to discuss final questions about the challenge and to -successfully- get their final go.

The SDU Robotics spinout Enabled Robotics develops mobile manipulation solutions and has been granted an InnoBooster project from the Innovation Fund Denmark. SDU Robotics is participating in this project as knowledge partner focusing on markerless pose estimation to improve localization of Enabled Robotic’s platform.

SDU Robotics participates in a new project called Libry Scout, which is a research project on robotizing parts of the logistic processes in Danish libraries. SDU Robotics works in this project on vision-based solutions for recognizing books and other library materials automatically.

On May 1st Jakob Andersen started his PhD project on the use of artificial intelligence and deep learning in diagnosis of diabetes related eye diseases.

The papers "Adapting Parameterized Motions using Iterative Learning and Online Collision Detection" and "Optimisation of Trap Design for Vibratory Bowl Feeders" were accepted for one of the top conferences for robotics, the IEEE International Conference on Robotics an Automation (ICRA), 2018. Both papers deal with the optimisation of automation processes.

On February 27, the Innovation Network RoboCluster is hosting an after-work meeting on testing of surgical technologies at the Odense University Hospital.

Learn about the possibilities of testing medical devices and be inspired as to how your company can develop your products based on data collection and processing through clinical trials.

During the afternoon, you can meet Associate Professor Thiusius Rajeeth Savarimuthu from SDU Robotics and two interesting companies that have experience in developing medical equipment in collaboration with the university.

Please visit RoboCluster’s website for more information about the program and info on registration.

In the collaborative R&D project MADE Digital, we have defined five demonstration projects together with the participating end user companies. MADE Digital is a large national initiative targeting increasing the level of knowledge and technologies in the Danish manufacturing industries.

The paper "Rotational Subgroup Voting and Pose Clustering for Robust 3D Object Recognition" by Anders Glent Buch, Lilita Kiforenko and Dirk Kraft was accepted for one of the top conferences in computer vision, the International Conference on Computer Vision (ICCV), 2017. This work addresses a long-standing issue in point cloud based object recognition and pose estimation and can potentially allow us to provide much more efficient algorithms in future applications. Potential applications involve object localization in 3D data, for example in bin picking and domestic robotics. Within industrial robotics and automation, the new method can beside other applications help to improve performance within feeding of individual parts (e.g. bin-picking) and localization of parts in assembly situations.

Meet us at the conference on Robots and Drones that is part of the Week of Health and Innovation (WHINN, October 10th - 12th) where amongst other speakers from the community Rajeeth will presents the progress towards automated surgical procedures and Leon discusses how robots could help to cope with the demographic change. As part of the event the Project Health-CAT is presented and a lab tour is offered.

Three members of SDU-Robotics (Henrik, Rajeeth and Dirk) will be visiting the IEEE/RSJ International Conference on Intelligent Robots and Systems in Vancouver, BC, Canada next week. We will be presenting the following papers: “A Framework for Handling and Combining Inaccuracy Propagation in Robot Subtasks for Industrial Assembly”, “Optical Coherence Tomography Based 1D to 6D Eye-In-Hand Calibration” and “Prediction of ICP Pose Uncertainties Using Monte Carlo Simulation with Synthetic Depth Images”. If you want to meet with us please do not hesitate to contact us (click on our names above to get contact information).

With two talks and one exhibit, SDU Robotics played a highly visible role in the MADE Open Lab Event on “Simulation”, on 29.08.2017 at DTI in Odense. SDU Robotics’ talks aimed at opening the discussion with the attending MADE members by introducing simulation as a tool as well as showing a bit of the future of simulation-based approaches in robotics. In addition, SDU Robotics helped their partners in the ReconCell project, Blue Ocean Robotics, to present latest results around this novel, self-reconfigurable robotics workcell during the “open lab”.

Read more about the event on the MADE homepage (in Danish)

Development of surgical instruments requires both technical and clinical knowledge. Access to one of these areas of expertise can drastically reduce or complete stop the development. Through this project, SDU provides small companies with the technical knowledge of how to test and document the performance of their products. SDU will in collaboration with Odense University Hospital provide testing facilities for animal trials.

The SMOOTH (Seamless huMan-robot interactiOn fOr THe support of elderly people) project has started April 1. The project is funded by Innovationsfonden and aims at the development of robots for elderly care institutions. From SDU, the researchers Poramate Manoonpong, Kerstin Fischer, Leon Bodenhagen and Norbert Krüger are involved.

In the last 5 years, a method for learning fingers for industrial grippers has been developed in a co-operation between SDU-Robotics and Bialystok Technical University. By this method, cumbersome work on gripper generation, which is a severe obstacle for the fast set-up of robot solutions, could be transferred to simulation. This very fruitful co-operation has led to multiple conference papers (Wolniakowski et al. 2014, 2015, 2016).

Together with our partners in the national SPIR project MADE – a platform for future production - and the national project Carmen, SDU Robotics has developed technologies for a highly modular, reconfigurable and mobile assembly platform running production at the Danfoss facilities in Silkeborg.