Fertin Pharma A/S is the latest company among a number of those who have been cooperating with SDU Sonderborg’s students. The company commended the young engineer brains for their inventive input. At the same time, they give a very glad smiley for the entire process which required only few resources but created large value.

Fertin Pharma is one of the world’s largest producers of nicotine chewing gum. The company just got through a course with a group of engineering students from SDU Sonderborg. During an intense course of only a few weeks, the students carried out market research, generated ideas, conducted usability tests and created prototypes. On Thursday, 7 March, everything was presented for Fertin Pharma representatives.

What exactly the students did cannot be revealed in these lines, but it is about the design of a product with a large potential for Fertin Pharma.

On the other hand, there is no secrecy about how everything took place. A month ago, manager, BD, Sales & Marketing from Fertin Pharma, Morten Nygaard, called the innovation advisor at SDU, Frederik Gottlieb. From here, things went fast.

- We arranged a meeting where we could present our company, the business areas, our challenges and what we would like to get out of a potential course with students from SDU.

Innovation advisor for SDU, Frederik Gottlieb, got back by mail with a proposal for a format which Fertin Pharma accepted. Subsequently, the company used four hours on drawing up a case task for the students. Another four hours were spent on a visit by the students where they were shown around and presented for the case. Finally, the students had three weeks to grapple with the task at hand before they could present their work and prototypes.

- En route, I allotted four hours to drop by SDU and spar with the students regarding their prototypes. In this connection, I was introduced to a large, broad base of ideas that I could prepare and at the same time have the opportunity to steer them in different directions to avoid that we as a company would be presented for five-six identical projects, Senior Project Manager at Fertin Pharma, Karsten R. Christensen says.

So Fertin Pharma used relatively few resources during the month that the project cooperation lasted. But what does the company say about the output?

- I am deeply impressed not only by the students’ ability to think out of the box but also by their ability to follow up on the ideas, to draw the further process and come up with a prototype, Karsten R. Christensen says.

He mentions that the company quite often is visited by sellers who offer proposes about how precisely they and their products can solve challenges for Fertin Pharma.

- Here you’re often left with a feeling of:  This is not what we’re looking for. Where are the new ideas?

And it is exactly in this respect that the students are on their toes, Karsten R. Christensen says.

- Even though the students do not fully gain their ends with their prototypes, their solutions are in many ways a lot more relevant that what we normally are introduced to. They bring in dimensions that challenge our mindset with their no-nonsense approach and which we usually do not encounter by the professionals.

While Fertin Pharma can be happy about new ideas, tangible prototypes and general inspiration, SDU can be pleased about their students being better prepared for a future as engineers when they get the chance to grapple with challenges from the real world.

Something for you and your company?

Below you can see some of the options that you and your company have for cooperating with SDU’s students: 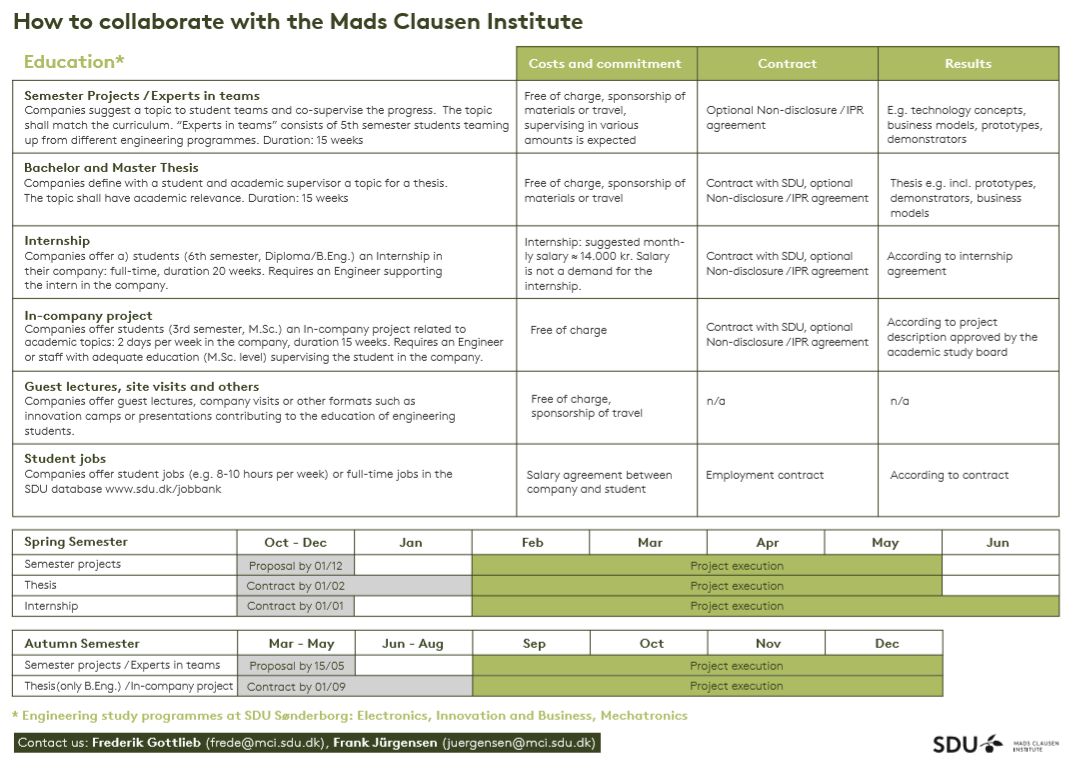 Back to MCI Insights