Researchers from SDU have succeeded in 3D printing artificial bones that grow naturally together with the body's own bones. In mouse experiments the artificial bones have even formed marrow. This opens up completely new possibilities for patients who need bone implants.

Researchers from SDU have successfully 3D printed bones that are so naturalistic in shape and material that they trick the body into thinking they are its own bones. The bones have cavities just like real bones. They are also printed in a material that is close to that of natural bones.

So says Associate Professor Morten Østergaard Andersen from SDU Biotechnology, who together with two engineering students in Welfare Technology has developed the artificial bone material which the 3D printer uses to build the bones.

The new implants are good news for the many patients every year who need a bone transplant. The doctor can scan the patient and using the pictures get the 3D printer to print out an implant that perfectly fits the individual patient. 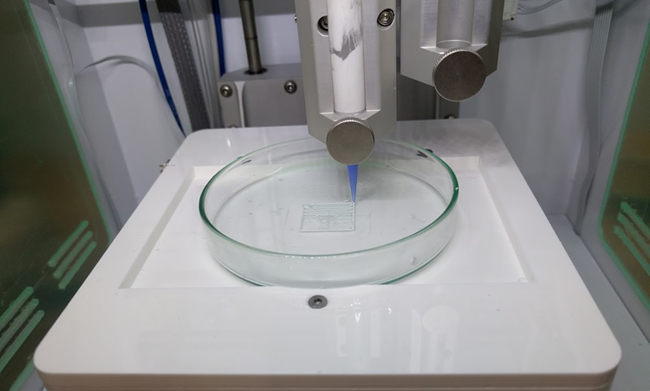 Several hospitals have experience with 3D printed implants of metal or plastic, but the body can react to those materials, which it experiences as a foreign body, and this can cause problems for the patient, such as infection.

- I believe so strongly in the possibilities for the new bones that we actually have some cases where it would be beneficial for the patient to wait with having jaw reconstruction until the artificial bones are approved for clinical trials, says Chief Surgeon Torben H. Thygesen from the Department of Oral and Maxillofacial Surgery  at Odense University Hospital.

He and his colleagues from plastic surgery operate on many patients who need to have their jaw reconstructed, for instance after having oral cancer, and he thinks that the results from the mouse experiments are so promising that pig experiments are plannned for the autumn. After that, things could move very quickly.

- If the results from the pig experiments are positive, the next step is to use the technique on humans. All the chemicals used in the new bone material are approved for use in humans. Therefore, it won't take long to get the implants into use to benefit patients, says Torben H. Thygesen. He expects the bones to be ready for clinical trials in one year.

The secret behind the bones

It could be that things will suddenly move very quickly, but it has taken several years to develop the right material with which to construct the artificial bones. The material had to resemble the body's own building blocks, be as strong as bone and be able to get through the 3D printer's nozzle.

- What comes out of the 3D printer is actually ceramic. A large proportion of human bone is made from clay. We mix a powder, which is mostly calcium phosphate, with fat until the consistency is correct, says Morten Østergaard Andersen:

The whole idea with the bones started as a Bachelor project for two engineering students in Welfare Technology. Torben H. Thygesen set Casper Slots and Martin Bonde Jensen a task. Namely, to invent an artificial bone material that the 3D printer can use, that is strong, that the body will accept and that will disappear over time.

- Actually, the new bones could have another potential use. When patients are operated on for oral cancer, the surgeon can't always find the cancerous tumor. We are working on something for cases like these where the cancer medicine can be inserted into the printed implants. The medicine can be targeted to the specific type of cancer and then be released directly into the remaining cancer cells, explains Torben H. Thygesen.