Next to CO2, methane is the greenhouse gas that contributes most to the man-made greenhouse effect. Of the methane sources caused by human activity, rice fields and cattle are among the most important. Furthermore, methane is released from swamp areas on land, melting permafrost as in the Arctic tundra, and from areas with oxygen depletion in the oceans.

We have a good understanding of the processes leading to the increasing CO2 content in the atmosphere, but this understanding is far more unclear when it comes to methane.

The majority of the atmosphere's methane is created by microorganisms living under oxygen-free conditions. It has so far been assumed that it is mainly the activity of these organisms that governs the release of methane from e.g. swamp areas on land and ocean areas with oxygen depletion.

However, new research from the Department of Biology at University of Southern Denmark (SDU) shows that most of the methane created in the ocean's oxygen-depleted areas is removed by methane-eating microorganisms before it is released to the atmosphere. 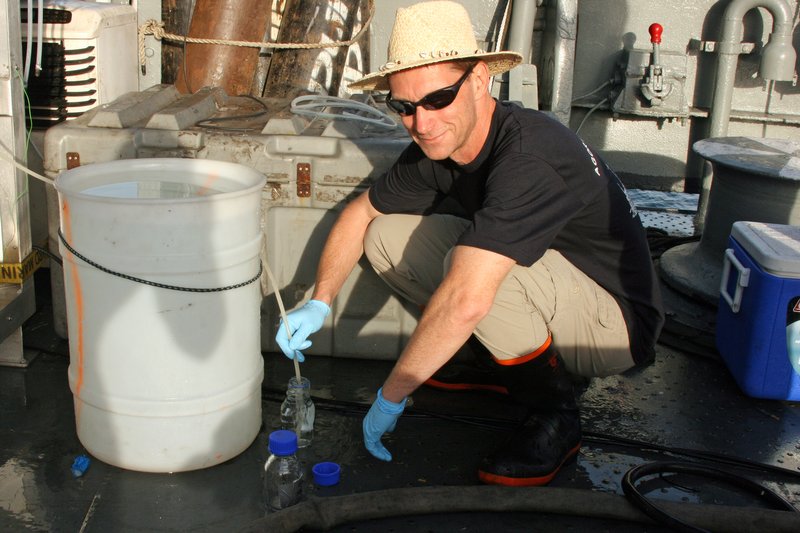 Professor Bo Thamdrup, University of Southern Denmark,  is an expert in marine microorganisms.

The discovery, made by SDU researchers in collaboration with colleagues from the Georgia Institute of Technology, USA, is the result of studies in the Pacific off the coast of Mexico.

Here we find the largest oxygen free area in the oceans - an area of more than 1 million square kilometers, where part of the water column is completely oxygen-free. This oxygen-free water contains methane.

Through water sample experiments carried out aboard the research vessel R / V Oceanus, the researchers were able to show that methane is actively consumed, and that it is caused by microorganisms living in the water. The microorganisms remove the methane to use it as an energy source.

The researchers estimate that approx. 80% of the methane produced in the oxygen free area is consumed by these microorganisms and thus removed.

The work is published in the scientific journal Limnology and Oceanography.

Release could be five times larger

“If the microorganisms did not eat the methane, the release from the oxygen free area would be approx. five times larger, and a large part of that could end up in the atmosphere, explains SDU Professor Bo Thamdrup, an expert in how marine microorganisms influence the environment.

“The methane pool of the oxygen-free zone is thus far more dynamic than previously thought, and it therefore becomes important to understand which microorganisms eat methane and how their activity is affected by environmental conditions.”

The big question now is which microorganisms are at play and how? The researchers have got a hint that highly specialized bacteria and so-called archaea (bacterial-like organisms) are involved.

What can we learn from the bacteria?

“Although there is a lot of energy in methane, methane as a molecule is difficult to activate and break apart, says Professor Thamdrup.

“Finding out how microorganisms do the job is not only important for understanding the process. In the long term, it may also potentially be of biotechnological value. Maybe it can help us convert methane into other useful products.”

Bo Thamdrup is a professor at Department of Biology. His research project Novel niches for anaerobic methane oxidation and their biogeochemical significance is funded by an ERC Horizon 2020 Advanced Grant.