Details are beginning to emerge as researchers work their way through image data from the black hole M87. Now a sharp ring of light, created by light particles whipping around the back of the supermassive black hole, has been discerned.

In 2019, the world saw the first image of a black hole: A dark core, encircled by a fiery aura of material falling toward it.

Could even richer imagery and insights be teased out of the data behind this image? A group of astronomers and physicists thought yes, and now they are ready to share their results with the world. They are published in The Astrophysical Journal (link)

Led by associate professor Avery Broderick, University of Waterloo, the research team, including assistant professor Roman Gold from the Department of Physics, Chemistry and Pharmacy, decided to "turn off the searchlight to see the fireflies", as described by Broderick.

The team has peeled off various elements of the image material and have essentially remastered the original image material from the black hole M87 which is located in the center of the M87 galaxy.


- This gave us a detailed and unique insight into the environment around the black hole, said Roman Gold.

Black holes in their natural habitat

Isolating and extracting this bright ring from the original observations of M87 is far from simple because it requires disentangling gravity from astrophysics when studying images of black holes in their natural habitat. According to Roman Gold, that is what this project is all about:

- We make the bright ring stand out, rising above the messy astrophysics, he said.

To achieve this, the team had to develop some special imaging software, called THEMIS. With it, they searched for some of the phenomena that theoretical models and simulations have previously predicted.

Thus, a ring of photons should exist – now its existence has been confirmed by the image material.

Likewise, the research team has also found traces of a powerful jet blasting outwards from the black hole – hitherto also only theoretically predicted.

- Our findings both confirm theoretical predictions and offer new ways to explore these mysterious objects, which are believed to reside at the heart of most galaxies. Almost every galaxy in the universe has one or more black holes that may be explored this way, said Roman Gold.

Black holes were long thought to be unseeable until researchers coaxed them out of hiding with the global network of telescopes, the Event Horizon Telescope (EHT). Using eight observatories on four continents, all pointing to the same spot in the sky, the EHT researchers observed two black holes in 2017.

The EHT collaboration first unveiled images of the supermassive black hole in the M87 galaxy in 2019, and then in 2022 of the comparitively small but tumultuous black hole at the heart of our own galaxy, the Milky Way. The latter called Sagittarius A* (or Sgr A*). 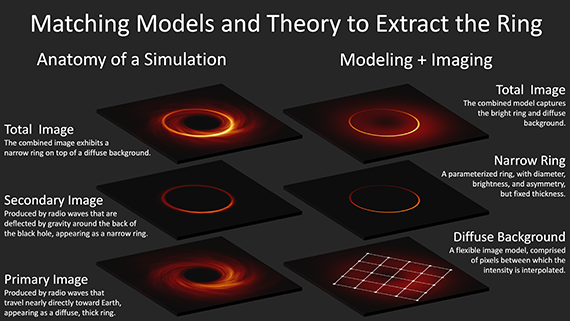 Supermassive black holes occupy the center of most galaxies, packing an incredible amount of mass and energy into a small space. The black hole M87, for example, is 2,000,000,000,000,000 times more massive than Earth (two quadrillion).

- There is a wealth of information in the publicly available datasets from M87 and Sgr A*. It encourages us researchers – the entire scientific community – to dig for gold, said Roman Gold, who is the only researcher from a Danish institution in the EHT collaboration.

Roman Gold is assistant professor at the Department of Physics, Chemistry and Pharmacy. His research interests include nature's most compact objects like black holes and neutron stars.