What happened in this forgotten cave in the Holy Land?

Due to both coincidences and political circumstances, several boxes of finds from a cave on the west bank of the Dead Sea ended up in a museum cellar, where it was forgotten for 40 years. Now new scientific analyzes provide insight into 5,000 years of human presence in the cave.

Maybe there was a gold treasure?

The idea must have at least crossed John Allegro’s mind when he, on behalf of British Dead Sea Scroll Foundation and under license from King Husein of Jordan, in 1960 ventured into a cave near the west bank of the Dead Sea, just 20 km east of Jerusalem.

Some years earlier in 1952, a very special Dead Sea Scroll made of copper had been found at the close by, world-famous site Qumran, with descriptions of hidden gold and silver treasures.

Allegro did not find any gold; the finds were mostly limited to some coins, utensils, textile remains and ceramic fragments. Nothing that would make the front page at the time. Allegro made a few notes in his diary and in 1966 published a popular book about his explorations; Search In The Desert, where he mentions the cave, but when the Seven Days War came in 1967, knowledge of the cave and the unpacked finds was lost in oblivion.

Allegro had named the cave "The Christmas Cave" because it was found on Christmas Day in 1960, but he had left no geographical reference, and a misleading name was scribbled on the boxes hidden away at the École biblique et archéologique de Française (EBAF), so when EBAF's staff and an international research team forty years later got on the trail of the boxes, they did not know which of the approx. 400 caves in the area west of the Dead Sea, the finds were retrieved in.

Professor Kaare Lund Rasmussen from the University of Southern Denmark was part of that research team, and he became involved in investigating the findings with modern techniques. He is a chemist, and his contribution has primarily been to subject the findings to chemical and petrological analyzes, including dating, which could hopefully provide new knowledge about age and place of origin.

The interdisciplinary research team also includes colleagues from Israel, Italy, England, the Netherlands, Argentina, and the United States, and the work has been published in the scientific journal Heritage Science. 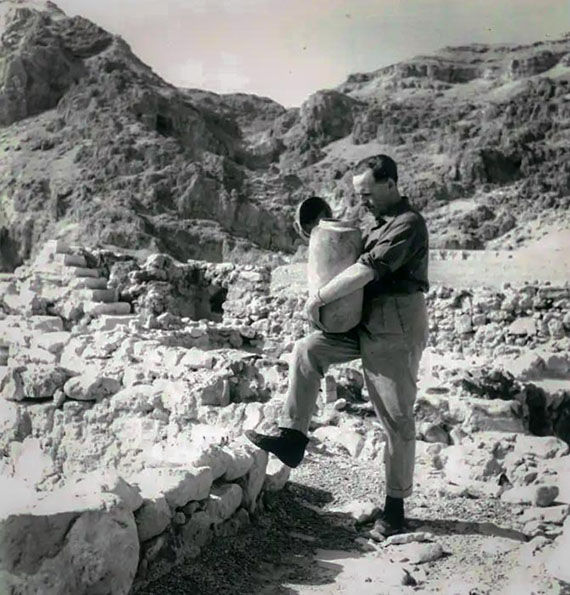 Because the cave is located on the west bank of the Dead Sea, it is automatically interesting for those who study the origins of Judaism and the conflicts, revolts, and wars that were common in the early days.

Already Allegro believed that The Christmas Cave had served as a refuge for fleeing Jews during the second Jewish uprising against the Romans in many cities, including Jerusalem, located 20 kilometers west of the cave.

But the analyzes have also revealed that The Christmas Cave probably also was visited by humans following the 66 CE first Jewish uprising.

- It is possible and even likely that The Christmas Cave was a refuge even during the first Jewish uprising - just as the cave had functioned as a refuge for centuries and in fact millennia before. It is only a good day's march from Jerusalem, and its entrance is difficult to spot if you are not familiar with the area, says Kaare Lund Rasmussen and continues:

- When we look at all our dates together, thermoluminescence and radiocarbon, we conclude that people were probably also visiting the cave after the Roman army drove all Jews out of Jerusalem in the wake of the first Jewish uprising, says Kaare Lund Rasmussen.

A mess on the floor

The conclusion is based on carbon-14 dating and thermoluminescence dating of materials such as wood, ceramic shards, textile residues, pits, grains, reed and animal feces, found in the cave.

The difficulty with this particular kind of place is that there is no sediment - and thus no stratigraphy. Usually, much of an archaeological interpretation is based on the fact that artefacts are found in a layered sequence with the youngest finds at the top. But in The Christmas Cave, as in so many of these kinds of caves, there is no layer sequence - all the artefacts lie in a mess on the floor. This posed a major challenge for the research team.

The oldest find in the cave is a piece of partially charred wood, which the new radiocarbon analyzes date to originate from approx. 4700 BCE.

Wood was rare and precious

- My Israeli archeology colleagues, Uri Davidovich, Amos Frumkin, and Roi Porat, are pretty sure that this is what happened, also based on the fact that there is no other known human activity in the area as far back as 4700 BCE.

Several pieces of textile and a number of potsherds in the cave are dated to Roman times, i.e. from the time around the two Jewish uprisings, and the interesting thing here, according to Kaare Lund Rasmussen, is what the textiles are made of:

- Some of them are made of wool, according to my Israeli colleagues who specializes in textiles, Orit Shamir and Naama Sukenik.

- This is quite normal in Roman time Israel, where 65 % of the textiles are made from wool, says Naama Sukenik of the Israel Antiquities Authority.

- The odd thing out is that Qumran, only eight kilometers from The Christmas Cave, is a settlement where there are no woolen clothes. Qumran was a center of spiritual power with buildings, water cisterns and an advanced pottery workshop - and also the area where the famous Dead Sea Scrolls were written and kept, Kaare Lund Rasmussen explains.

The presence of wool

- We have two potsherds, probably made of clay from Qumran, but their datings do not match the time frame of the Qumran settlement, which stretches from 200 BCE to 66 CE. If we compare all the other ceramic fragments from The Christmas Cave with fragments from Qumran, we find no similarities in the raw material. It seems that the ceramics found in The Christmas Cave were produced from clay from three to four different places – we do not yet know where, says Kaare Lund Rasmussen.

Some of the potsherds were found to still contain traces of food, and the organic-chemical team from Pisa University revealed that the cave's residents probably prepared food containing both vegetable oils and animal fats, and also that olives, dates and cereals have been consumed in the cave.

- So, we have come a lot closer to an understanding of the many people who have visited this cave. It was probably mostly used in connection with war and unrest during a formidable period over the last 5000 years, says Kaare Lund Rasmussen.

Kaare Lund Rasmussen is a professor at the Department of Physics, Chemistry and Pharmacy. He is an expert in archeometry; to chemically analyze archaeological and historical artefacts. He has analyzed high-profile artefacts such as the tomb of astronomer Tycho Brahe, the Dead Sea Scrolls, the coffin of Canute the Holy, and the skeletons of Jesu apostles.