By making use of new technology, Northern Europe’s largest pumpkin grower sold 40.000 pumpkins more. By means of drones, camera and image analysis, researchers from University of Southern Denmark succeeded in counting the pumpkins on the field.

Things are humming on the pumpkin fields at Gyldensteen Farm on North Funen. During the weeks before Christmas, 400.000 pumpkins need to be collected and sent to the shops. But by making use of new technology, pumpkin grower Frants Bernstorff-Gyldensteen managed to optimise his annual sale by 40.000 pumpkins.

- I can sleep much easier because I have an overview of the output. I was able to sell an extra 40.000 pumpkins, because the overview map now shows me quite exactly how many pumpkins are lying on the field, Frants Bernstorff-Gyldensteen says.

Late September, Frants Bernstorff-Gyldensteen received 2 overview images from University of Southern Denmark. Drones had taken pictures from the pumpkin fields and a computer system was then able to count the orange spots on the images and come up with a total number of pumpkins.

- As a researcher, it is great to have developed a programme that the grower relies on to the extent that he dares to base his sales on our data. By this he shows a huge trust in our system and fortunately, the technology has proven to optimise his sales so that the pumpkins are used as Halloween decoration instead of being wasted, says researcher in computer vision, Henrik Skov Midtiby from SDU Drone Centre.


After this successful business case, the researchers have now turned their eyes on other crops on the fields around Gyldensteen Farm. They received around 15 million Danish Kroner funding from the Ministry of Environment and Food of Denmark’s Green Development and Demonstration Programme (Grønt Udviklings- og Demonstrationsprogram (GUDP)) for the project called sqM-Farm, in which they are trying to optimise the output of onions and grain.

- For the farmer it is not possible to make an overall assessment of weeds, pests and the general growth on 700 hectares of land. But if we develop computer systems which can warn the farmer via image processing when deviations from the normal conditions on the fields occur, the farmer has the opportunity to react quickly and control the damage before it can spread, Henrik Skov Midtiby points out. 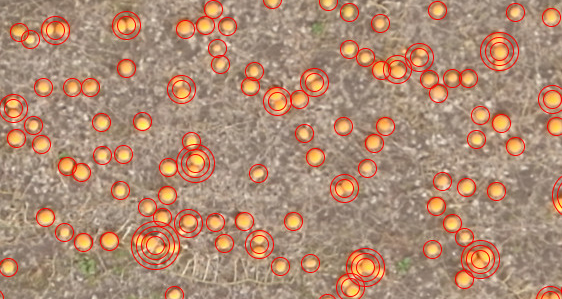 - The fields around Gyldensteen Farm lie within that drone airspace on North Funen that the Danish Transport Authority has dedicated to drone flights. This is why we, in the long term, envision that we can type in the coordinates of the drone, send it out from HCA Airport and tell it to take pictures of the fields. When it returns, we can quickly process the images – by this we also get around having to drive to Gyldensteen, says Henrik Skov Midtiby.