Here is the perfect spot for a birds’ inner compass

Migratory birds use a magnetic compass in their eye for navigation. Its basic sensory mechanisms have long remained elusive, but now researchers reveal exactly where in the eye, the birds’ control center for navigation is situated.

Migratory birds travel long distances when they shift between breeding and wintering grounds.

Observations of migrating birds were first recorded by ancient Greeks more than 3,000 years ago, and it has long been one of Natures’ great mysteries how they find their way when embarking on thousands of kilometers long journeys. 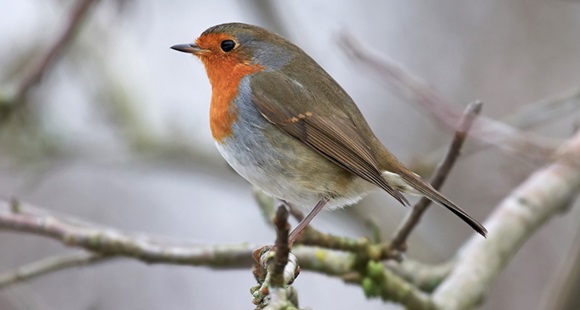 The European robin is a common migratory bird. Photo: Colourbox.

In 2000 researchers suggested that a protein in the birds’ eye helps them take information from light and process it to a travel course: an inner magnetic compass. Since then the basic sensory mechanisms underlying this magnetoreception has remained elusive.

In order to solve the riddle a research group at University of Southern Denmark joined forces with colleagues from the University in Oldenburg, Germany.

The team conducted a series of studies and simulations that reveal the detailed position and nature of the inner compass. Their work involves studies of European robins (Erithacus rubecula), sequencing and computer microscopy of birds’ eyes.

- We believe that we have strong evidence to pinpoint the right magnetoreceptor molecule in migratory birds, said Ilia Solov’yov, Associate Professor at University of Southern Denmark.

The study is published in the journal Current Biology.

The birds need light for their inner compass Ilia Solov’yov is a theoretical physicist, a computational biophysicist and head of Quantum Biology and Computational Physics Group at University of Southern Denmark. Photo: Anders Boe/SDU.

- The magnetic compass sense in migratory birds is light dependent, and we wanted to find out which protein is at play. Theories have been circling around the so-called cryptochromes – but these cryptic proteins come in very different variations - so which one?, he said.

Cryptochromes belong to a big group of proteins, found in all living organisms from plants to animals. In plants and various animal species, they are involved in, among other things, the circadian clock and help the plant or animal know the difference between night and day. In mammals, they are normally localized in cell nuclei.

To date, four different cryptochromes have been found in the retina of several bird species. Three of them show no relevance for magnetoreception, the researchers conclude.

- But the fourth, Cry4, seems to be significantly different from its family members, Ilia Solov’yov said.

When light hits cryptochromes in the eye of a migrating bird, they undergo chemical reactions that are influenced by the direction of Earth’s magnetic field, providing a signal of the bird’s orientation.

In their laboratory, the experimental researchers from Oldenburg in Germany, led by Professor Henrik Mouritsen, compared the expression levels of the cryptochromes during the spring and autumn migratory seasons relative to the non-migratory seasons in European robins.

They discovered that the Cry4 expression level in European robin retinae is significantly higher during the migratory season compared to the non-migratory seasons.

- This is a strong indicator that the responsible protein is indeed cryptochrome 4. Researchers have discovered that the long sought after protein in migratory birds are situated exactly here at the outer segment of the so-called double cone photoreceptor cells in the retina of the bird (this is a European robin). Cry4 is unique to birds and therefore could endow them with the sixth sense. Illustration: Ilia Solov'yov.

The researchers went on to determine Cry4s structure and localization within the retina of the eye. They sequenced migratory European robin Cry4 from the retina and used it to predict the structure of the Cry4 protein.

This work involved roughly 20,000 node hours on the supercomputer ABACUS 2.0 at SDU, meaning that if they would run the simulations on one computational node (which has 24 processors), it would require 20,000 hours. If the same work was done on a normal laptop, it would take 15 years.

- The structure of Cry4 is unique. It has structural motifs that agree well with indirect measurements and show clear differences to other cryptochromes from plants and insects, said Ilia Solov’yov.

Moreover, it was revealed that Cry4 is specifically expressed in one very specific part of the retina; namely the outer segment of the double-cone photoreceptor cells. 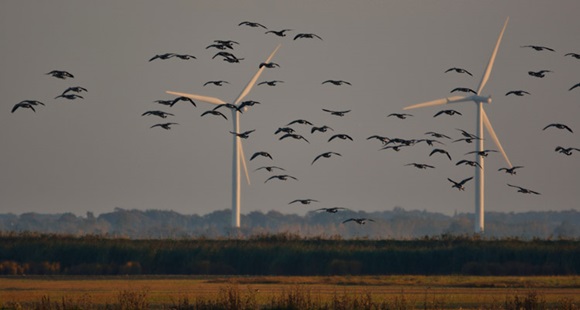 Windmills can pose a threat to migrating birds. Photo: Colourbox.

Inner compasses are not only found in migratory birds, but also in other animals such as bees.

- Understanding these inner compasses in animals can give us a fundamental knowledge of nature and maybe we can use it to protect wildlife. Many birds are killed in windmills, because they get disturbed by the turbulence around the mills. If we knew what magnetic fields exist around the mills, we maybe could construct some kind of protection zone around the mills, said Ilia Solov’yov.

Ilia Solov'yov is an associate professor at the SDU eScience Centre, Department of Physics, Chemistry and Pharmacy. He is head of Quantum Biology and Computational Physics research group.

Of particular interest are those biological processes that trigger energy conversion into forms that are usable for chemical transformations and are quantum mechanical in nature. Such processes involve chemical reactions, light absorption, formation of excited electronic states, transfer of excitation energy, and transfer of electrons and protons in chemical processes.

Read more about the group