The whole world is looking at the possibility of drug repurposing

The medicine of the future for a wide range of diseases may exist in the drugs that have already been developed. Researchers from SDU, among others, are looking for drugs that may have an effect on completely different diseases than the ones they have been approved for.

In 1998, a new drug entered the market that for many men opened the door to an otherwise inaccessible world of pleasure. The drug was, of course, Viagra, which helped many people get their sex life back on track.

However, the researchers who studied the effect of the substance quickly found that the male patients experienced a specific (side) effect of the drug.

Viagra is just one example of what is called drug repurposing, or finding new purposes for existing drugs. As it turns out, some drugs have an effect on diseases or conditions that they weren’t developed for, but which is discovered by researchers in an aha moment.

It is worth the effort to look for drugs that can have an effect on completely different diseases than those for which they were originally developed: These are already approved drugs, and therefore you do not have to go through years of and extremely expensive clinical studies before one can take them in use against new diseases. It has obvious value for patients.

Just a few months ago, the diabetes drug dapagliflozin was approved for the treatment of chronic kidney disease because trials had shown that treatment with dapagliflozin can dramatically reduce the risk of dying for this huge patient population.

A lot of drugs or drug candidates may have an effect on diseases other than those at which they are targeted, and in recent years, researchers from all over the world have put all their energy into finding out if some of the already developed drugs can be used to treat diseases for which we do not currently have very good treatments or which we cannot treat at all.

Researchers from the University of Southern Denmark are involved in this treasure hunt for finding new purposes for existing drugs.

Jesper Hallas and his group are not currently researching to find drugs that can be used to treat diseases other than those for which they are indicated. But this could easily change.

Jesper Hallas’ research is aimed at trawling Danish registers for connections between the use of drugs and unknown side effects. As an example, a given drug may be associated with excess blood clots.

The predominant focus has been on finding adverse effects of drugs, but data may just as well be used for the opposite, namely finding beneficial effects.

But as Jesper Hallas says, he might as well look at whether given drugs are inadvertently associated with a lower incidence of blood clots – that is, that people who take a remedy for hair loss or haemorrhoids, for example, are much less likely to get a blood clot.

– It may make it worthwhile in clinical trials to investigate whether the given drug actually has a protective effect in relation to the development of blood clots, Jesper Hallas explains.

He says that in Denmark we have some of the world’s best registers to search for new purposes for existing drugs. These are, in particular, the National Patient Register, which has recorded information on all Danes’ contacts with the hospital service since 1977, and the Danish National Prescription Registry of the Danish Medicines Agency, which has collected data on all dispensed prescriptions in Denmark since 1995.

Only very few countries have, like Denmark, such complete data sets to study drugs for unintended positive effects. If you combine these two registers, you can see both the medicine people have been given and what it has meant for the occurrence of various diseases and conditions.

– It is obvious to use the registers to find drugs for diseases for which they are not currently used. So far, however, the predominant focus has been on finding adverse effects of drugs, but data may just as well be used for the opposite, namely finding beneficial effects, Jesper Hallas says.

As a first step, Jesper Hallas would like to throw a wide net into the huge amount of data and see what he catches.

However, this is easier said than done. After all, users of medicine are exactly that, and it may be difficult to compare their state of health with a broad range of the population.

Still, there are data analytical solutions to this, and Jesper Hallas is in the process of developing them.

– It’s the scientific challenge we are trying to solve. But once we have solved it in terms of finding side effects, it’s just a matter of making some minor adjustments, and then we can also use our systems to find drugs with positive effects that we had not anticipated, explains Jesper Hallas.

Jesper Hallas is a Professor at Clinical Pharmacology and Pharmacy, Department of Public Health.

Jan Baumbach approaches the problem differently than Jesper Hallas, although he also uses the computer and advanced algorithms.

Instead, he utilises bioinformatics to trawl through the scientific literature in the correlations of drugs, diseases, and genes.

Jan Baumbach and his research group integrate data in a way that groups of connections arise. Groups of diseases may, for example, have the same genetic background, or groups of drugs may have the same mechanism of action.

Bioinformatically, we can find out which drugs are targeted at the different genes and mechanisms without having been used to treat the resulting disease.

– When you can group different drug targets into clusters, the targeted diseases often have many disease genes or disease mechanisms in common and similar drugs to treat them. In that case it may be relevant to look at whether drugs for the treatment of one disease can also be used to treat another disease with many of the same characteristics, says Jan Baumbach.

A drug for several cancers

Here an opportunity arises to look at whether the two different drugs may also have an effect on the opposite diseases. These are the connections that Jan Baumbach finds.

– Bioinformatically, we can find out which drugs are targeted at the different genes and mechanisms without having been used to treat the resulting disease, he says.

Jan Baumbach mentions cancer as an example. Some types of cancer may have the same genetic mutation pattern as others, and if this is the case, it may make sense to look at whether a drug for the treatment of one type of cancer could also be used to treat another.

Another and very contemporary example is remdesivir, which is approved for the treatment of COVID-19.

In this case, as in the above-mentioned example, it could be interesting to look at the mechanisms in the body at which remdesivir is targeted and conduct a broad search in the literature for other drugs that are targeted at the same mechanism.

In fact, researchers have already done this with COVID-19 and found a handful of candidates targeting the same mechanism in the body as remdesivir. The researchers in Jan Baumbach’s group are currently testing these drugs and drug candidates to see if they can be thrown into the fight against the pandemic.

Discarded drugs may be useful

– The idea of using existing drugs in the treatment of other diseases is not new, but researchers have done so by looking at whether the drugs have similar structures. Here we go much deeper into the data and look at links that go beyond the structural ones, explains Jan Baumbach.

According to the researcher, pharmaceutical giant AstraZeneca, among others, uses the approach to revisit their thousands of discarded drug candidates.

Many of the drug candidates may have been successful in early clinical trials in humans but have then been dumped half way through as they turned out to be only effective in a small group of patients.

– But by using bioinformatics, they can find out why the drugs only worked in a particular subgroup of patients, and then the drugs can be revived. You may have a drug that only works in 20 per cent of patients, but which in turn is 10 times more effective.

– If you can identify the group for whom the drug works, it holds great potential. That’s the reason why corporations are also looking at what we’re doing, says Jan Baumbach. 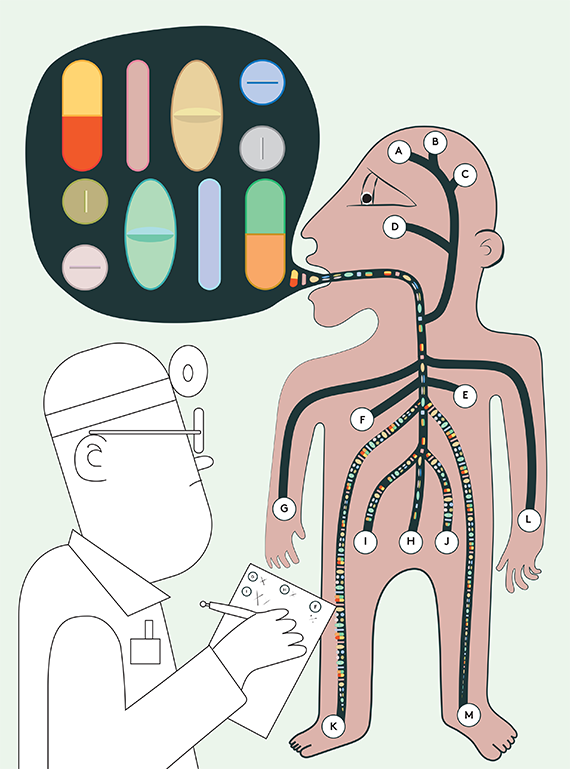 Jan Baumbach is a professor and head of research at the Department of Mathematics and Computer Science, SDU, and the Technical University of Munich.


While Jan Baumbach and Jesper Hallas throw wide nets into the data soup, Paolo Ceppi is much more focused as to the drugs and drug targets he is looking at. He is specifically looking at drugs that may inhibit the formation of cancer metastases.

– Cancer patients are rarely killed by their first tumour but instead by metastases, which are formed elsewhere in the body. Therefore, we are very interested in finding drugs that are targeted exactly at the mechanisms in the body’s cells that allow cancer to metastasise.

– We know the signalling pathways and mechanisms involved, so our goal is to search for substances in the current drugs and drug candidates targeted at this particular mechanism, explains Paolo Ceppi.

If the cancer tumour can be confined to just that one location in the body where it occurred, a lot of human lives could be spared across all types of cancer.

To cut a long story short, cancer cells utilise a specific cell mechanism when they form metastases elsewhere in the body.

First, they have to transform themselves into cells that can survive in the blood streams while being transported around the body, after which they have to go through the exact opposite process in a new location to become a tumour cell again.

This mechanism is in fact not invented by the cancer cells. It is naturally present in our genes and is used in connection with embryonic development. But cancer cells have found a way to reactivate it and use it to be transported around the body for the purpose of forming metastases.

One of these mechanisms is called Epithelial–mesenchymal transition (EMT), but still no approved drug is targeted at EMT.

– The hope is that you can block EMT in cancer patients and thus prevent the development of metastases in connection with cancer.

– You cannot use a drug for EMT to remove the metastases once they have formed, but if the cancer tumour can be confined to just that one location in the body where it occurred, a lot of human lives could be spared across all types of cancer, says Paolo Ceppi.

In his research, Paolo Ceppi has specifically reviewed the medical literature to find drugs that block EMT without being approved as a treatment to prevent the formation of metastases.

Even more specifically, the researcher has looked for drugs that block the metabolic signalling pathways related to EMT.

Such drugs actually already exist, and in his research, Paolo Ceppi has found 20 molecules that, according to the researcher, could possibly be repurposed to prevent the development of metastases. Among the drugs are several anti-cancer drugs, but also drugs for depression, autism, cardiovascular diseases and alcoholism.

– In our study, we have opened up a discussion on how to find drugs that are targeted EMT. There is already data in the literature, but we need to perform a systematic search and subsequently investigate whether these drugs can have the effect that we are looking for, says Paolo Ceppi.

Paolo Ceppi is an Associate Professor and Head of Research at Department of Biochemistry and Molecular Biology.