Toxic is bad. Or is it? New studies of seagrasses reveal that they are surprisingly good at detoxifying themselves when growing in toxic seabed. But if seagrasses are stressed by their environment, they lose the ability and die. All over the world seagrasses are increasingly stressed and one factor contributing to this can be lack of detoxification. 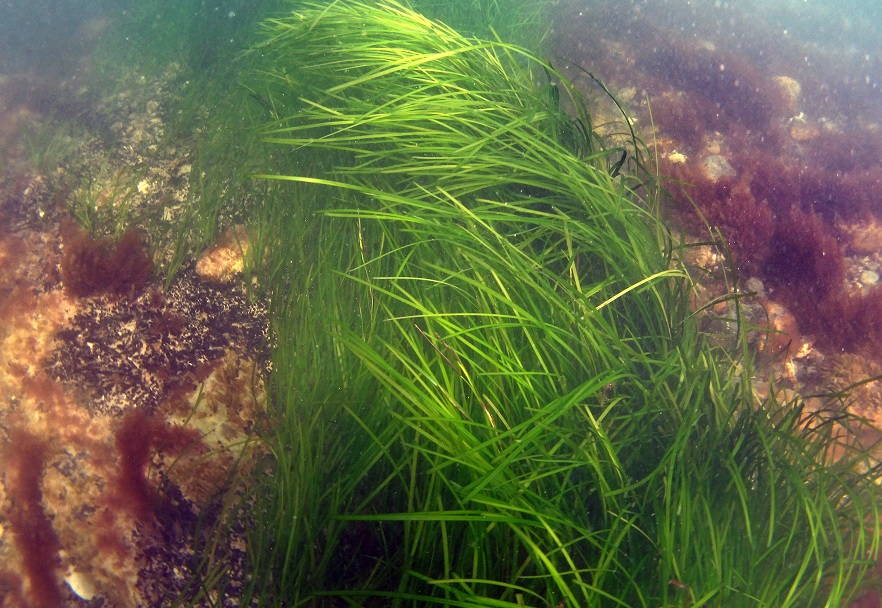 Seagrass meadows grow along most of the world's coasts where they provide important habitats for a wide variety of life forms. However in many places seagrass meadows have been lost or seriously diminished and in several places, researchers and authorities work hard to understand what is happening and prevent the seagrasses from disappearing.

Now biologists from SDU add another important piece to the understanding of seagrass life.

It has long been known that the toxin sulphide is part of the threat to seagrasses. Sulphide is a naturally occurring toxin found in the seabed where seagrasses grow. The seabed is characterized by lack of oxygen and a smell of rotten eggs from sulphides.

A widely held theory states that seagrasses cannot tolerate sulphide and that increasing amounts of sulphide due to increased pollution have a negative effect on seagrasses.

Sulfide is absorbed by plant tissue

"But our research shows that seagrasses are actually capable of protecting themselves from sulphide. In fact, seagrasses benefit from sulphide”, explains postdoc Harald Hasler-Sheetal who has conducted the research together with Professor Marianne Holmer, both from the Department of Biology, University of Southern Denmark.

Seagrasses are not seaweeds, but a plant with flowers, leaves and roots just like plants on land. Seagrasses also produce seeds that can be sown in the seabed and grow to new plants. There are approx. 60 seagrass species in the world with eelgrass (Zostera marina) in temperate areas as a common species. Seagrasses need light and only grow where at least 10% of the sun's light can reach the plants.

The study shows that seagrasses are capable of protecting themselves against app. two thirds of the sulphide that enters the plant from toxic seabed. The last third is absorbed by the plant’s tissue and here enzymes convert the sulphide into beneficial nutrients.

But the discovery that a seagrass can protect itself from sulfide does not mean that all is good.

"Seagrasses cannot tolerate sulphide under all circumstances. If a seagrass is stressed, the plant's capacity to detoxify itself will weaken, and the plant will be less capable of protecting itself from sulphide. It's like when humans are stressed; then we cannot perform optimally. Stressed seagrasses grow slower and may die back – this is what we see in many parts of the world", explains Harald Hasler-Sheetal.

Factors that may stress seagrasses, so it loses its natural ability to detoxify itself of sulphide include:

• Rising temperatures: If the water gets warmer, there is a greater risk of low oxygen in the water, which reduces seagrass’ capacity to detoxify sulphide.

• Discharge of nutrients: When fertilizers are washed from land into shallow coastal areas, many nutrients will be carried with the water. This stimulates blooms of phytoplankton, leading to shading and consumption of the oxygen in the water reducing the seagrasses capacity to detoxify sulphides.

How does seagrass detoxify itself? 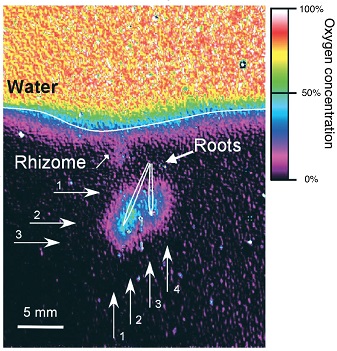 Seagrass protects itself from sulphide in two ways: First it creates a shield around its roots so that sulphide cannot penetrate into the plant’s interior. App. two thirds of the sulphide is being kept out this way. This shield consists of oxygen. The plant sends oxygen down to the roots and oxygen diffuse out of the roots. This oxygen shield can be maintained in daylight, where the plant produces oxygen via photosynthesis. At night oxygen is diffusing from the water to the roots. Part of the oxygen is also used to oxidize sulphide to sulfur, which the plant deposits as a harmless substance on the inside of air channels.

The last third of the sulphide is allowed to penetrate into the plant. This probably happens mainly at night, where the oxygen shield is smallest. Once inside the plant, enzymes convert the sulphide to useful nutrients for the plant.

If seagrass does not get enough oxygen, it cannot maintain these detoxification mechanisms.