The drone team SDU Eagles has developed a drone to transport goods that is 30 % more energy efficient. The drone has brought the team to the University Startup World Cup finals.

The ambitions seem endless for the 12 students that make up the drone team SDU Eagles. When the students started building their drone in 2018, the first major challenge was to even get it in the air. Now, both the done and the ambitions are reaching for the sky.

- We want to revolutionize the way we transport goods. We have created a drone that flies on electricity and saves 30 % energy compared to other standard drones, says SDU Eagles team leader André Rangel de Sousa, who is studying Product Development and Innovation at SDU:

- Transportation is where most of our carbon emissions come from. But what if we used the sky instead of roads? Using drones for transportation can be very energy efficient.

The students in the drone team have developed the first blended-box wing drone. This means that the drone has a special wing design that is developed to make airplanes more energy efficient. The construction of the wings means that the plane needs less energy to stay in the air.

- Our drone can transport goods weighing up to 2 kg. It has shown great aerodynamic qualities, and the possibilities are huge.

-What if we can not only transport goods but also medicine, blood or fire grenades that can be dropped by drones on emerging wildfires, André de Sousa asks.

We believe that participating in competitions ultimately makes us better engineers

This summer, SDU Eagles was named the most promising team at IMECHE UAS Challenge 2019, an English drone competition for students.

Now, the team is working around the clock to get ready for the University Startup World Cup, where SDU Eagles is in the finals.

- We are giving it everything we’ve got. The competition is making us push our boundaries, because we want to win so bad. We believe that participating in competitions ultimately makes us better engineers, André Rangel de Sousa says.

The team is e.g. struggling with the implementation of vertical takeoff and landing the drone.

- Vertical takeoff and landing for our drone will require a high-powered propulsion and a very advanced control system. We need the electric ducted fans that will power our new version. When we get them, we will be testing them, before we try the fans on the drone. 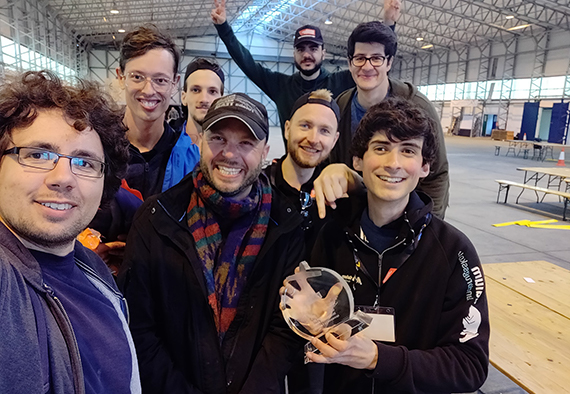 But the fans and all the other electronic gear are very expensive, and the ambitions and the finances need to cohere.

- We have been trying to get funding for 2 months now, buts it's a complicated process; we are basically trying everything, André Rangel de Sousa says:

- Not many students start drone projects. It is hard work and requires a lot of dedication, because you fail so many times, before you succeed. But we are lucky to be at a university with such great facilities and where we feel very supported in our work.