Skip to main content
The Faculty of Engineering Global Goals

Steffen Thrane Vindt has come up with an invention that can help ensure a steady green energy supply and improve the service life of electric cars and fuel cell vehicles. Initial advice and professional sparring convinced the chemical engineer that his research work could be combined with the dream of owning a business

Having started his Ph.D. project at SDU, it did not take long for Steffen Thrane Vindt to realise that there was a business opportunity there.

The chemical engineer has developed a supercapacitor with a hybrid electrolyte that can rapidly store energy in a sustainable and cheap manner.

He highlights that a supercapacitor can make cars more energy efficient and can ensure a steady storage of power from wind turbines and solar cells.

— As the supercapacitor has existed for many years, the focus of my Ph.D. project was instead to make it less expensive by using materials that can be produced far cheaper than existing technologies, says Steffen Thrane Vindt. 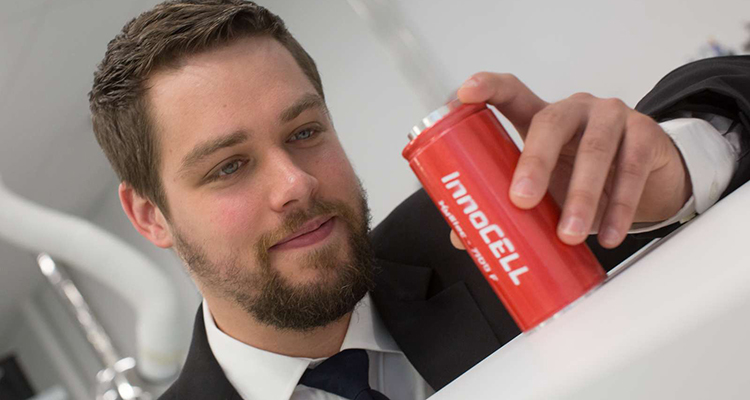 For example, the 27-year-old chemical engineer has succeeded in developing a method for manufacturing high-performance electrode materials from a cheap residual product such as pistachio shells.

Steffen Thrane Vindt sees a number of potential uses for his invention and gives two examples of how a supercapacitor can lead to more efficient energy storage in future technology.

This applies especially to cars.

— Batteries and fuel cells have a higher energy density but are sensitive to sudden loads, which deplete their efficiency and service life. For the vast majority of cars, it would be beneficial to have a well-dimensioned capacitor bank that can work together with another energy technology, thus enabling regenerative braking and rapid charging.

In addition, the supercapacitor can utilise surplus power from wind turbines and solar cells.

— Renewable energy technologies have the problem that they are very sporadic in their production. They generate power when the wind blows or the sun is shining, while at other times we are forced to fire up a coal power plant. A supercapacitor can store the green energy that is produced to ensure a steady supply, says Steffen Thrane Vindt.

In the early stages of Steffen Thrane Vindt’s Ph.D. project, when the supercapacitor was just theoretical sketches, the chemical engineer thought he would pursue a traditional academic career consisting of research, publishing and teaching.

Along the way, he came into contact with the founders of the Danish company ERD. Here, the experienced entrepreneur Steen Yde-Andersen became an important sparring partner and the idea of introducing a new type of supercapacitor on to the market began to take shape.

They were put in touch with a business developer at the former SDU Business unit (currently known as SDU RIO). The consultant advised them that it would be beneficial to quickly get a patent for the idea.

— He had great faith in us and was particularly helpful with some of the practical formalities that were necessary to protect the idea. At the same time, he constantly challenged us to show how far we had come and to explain what the hallmark of the invention was, says Steffen Thrane Vindt.

Alongside his invention, Steffen Thrane Vindt worked on his dissertation.

It was an intense process with a hectic climax in the summer of 2016, culminating in an urgent application being sent to the Danish Patent and Trademark Office just one day before the dissertation was due for submission at SDU.

In December 2016, the company InnoCell was established with an ownership consisting of Steffen Thrane Vindt, investors from ERD as well as Science Ventures Denmark A/S, an SDU company which supports and invests in technological entrepreneurship projects.

The company is still in the development phase in which work on a prototype continues.

— We are trying as quickly as possible to get to a stage where we can start production. But it is a fine balance. The quicker you try to get the process started, the more expensive it becomes and the more you risk losing ownership interest to new investors. Right now, we are at crawling speed where I am able to spend a couple of hours a week developing the technology.

The next step is to test the product on some large-scale energy storage projects. This could be at car manufacturers or in the wind turbine industry.

— For many people, it seems strange to use a supercapacitor in the way we are proposing. The only way to convince the sceptics is to participate in pilot projects where we are allowed to construct a demonstration plant. This would provide a great opportunity to show what our product can do.

Currently, Steffen Thrane Vindt is living a traditional university existence as a researcher and teacher in a postdoc position in SDU’s Faculty of Engineering.

This has led Steffen Thrane Vindt to regularly reflect on his professional identity.

— I often wonder where I belong. Am I a scientist or an entrepreneur? In the academic world, there is a lot of focus on publications. I could have had three publications instead of one patent application, which could have directly benefited my research career more. But one of the reasons I became a chemical engineer is that I like when things have a function. And for that reason, I find it very satisfying that the thoughts and ideas that I have in my head appear to have some commercial potential, which we are now going to pursue.

Steffen Thrane Vindt is a chemical engineer and Ph.D. student at SDU where he is currently a researcher and teacher in a postdoc position in SDU’s Faculty of Engineering. He is a co-founder of InnoCell ApS, which he runs together with co-owners from the energy technology company ERD and the SDU subsidiary Science Ventures Denmark.

SDU RIO (Research & Innovation Organisation) is a unit at the university that supports collaboration between research, education, the business community and the public sector. Among its objectives, it aims to support SDU’s researchers in their efforts to obtain research and innovation funding as well as increase the number of viable businesses that come out of SDU.