Summer in the name of science

Right now, around 450 students from all over the world are gathered at SDU to attend the annual summer school. When they leave, they will have grown academically and have built an international network.

It is a Friday afternoon at SDU, and most of Campus Odense is deserted. The students are still off for the summer. However, 450 students from all over the world are gathered in the building of the Faculty of Engineering.

One of them is 28-year-old Patrick Jong from Holland. He is a student in Munich, but he has come to Odense for a summer course on “Galactic Dynamics and Dark Matter”. The course is one of 12 courses in SDU’s annual Engineering and Science Summer School:

- The first week has been very exciting. The working environment is really good, and the academic level is high. Everything is in one place, which is quite rare for universities. It makes the whole campus feel like one organism, Patrick says.

He is standing in a big crowd of students on the iconic copper staircase at the Faculty of Engineering, waiting. The obligatory group photo is only a few minutes away. After a bit of instruction from the photographer, the 450 participants bring out their biggest smiles and look into the lens. 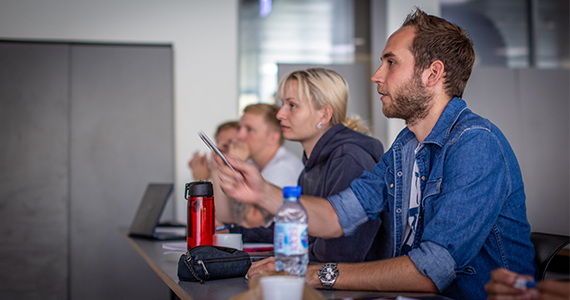 Afterwards, Patrick Jong finds his way to room U64 where the next lesson is about to start:

- We are trying to prove that dark matter exists in the galaxy. Our task is to come up with problems and possible solutions. It is an academically rewarding way to work, because students and researchers are here to learn from each other.

In the classroom across the hall, 23-year-old Nancy Yazbeck is busy taking notes. She has flown in from Beirut, Lebanon to take a course in “Deep Learning”, which means enabling computers to learn without them being specifically programmed:

- I was offered to come to Denmark because my university is partnered with SDU. I chose to go, because it sounded interesting, and I wanted to try something new.

A multitude of nationalities

Around 42 different nationalities are represented at the summer school, and the international component is attractive to Nancy Yazbeck.

The 23-year-old Lebanese has already built a new international network with some of the other participants:

- It is interesting to meet new cultures, but also to see how people from other countries work and experiment with academic problems. That is something that I can take home and use in my studies, she says.

The number of participants has doubled

The summer school was started last year, and one of the organizers is Henning Andersen, Director of Studies at the Faculty of Engineering. He says that there has been a great interest in the summer school this year because of last year’s high quality.

- We are very happy to see that the students are so determined. They are here because of the academic level that we offer. I think that is one of the reasons we have so many participants.

The Director of Studies hopes to make the summer school a permanent tradition at SDU:

- I want it to become a possibility for each of the different fields that can attract students from outside of SDU, but at the same time attract our own students to participate in these summer schools.

Patrick Jong and Nancy Yazbeck have finished their courses for the day, and their first weekend in Denmark has arrived. As part of the course, SDU has planned social and cultural activities at night to strengthen the bond between the participants.

For Nancy Yazbeck, the first week of summer school has made her consider her future:

- I could easily see myself as a student here at SDU in the future. The summer school has definitely opened up new possibilities for me, and I am grateful for that.