Carnivorous dinosaurs strolled around in Germany

142 million years ago two carnivorous dinosaurs strolled along the beach in what is now Germany. Their footprints fossilized and have been analyzed by a biologist who now provides insight into the two hunters' daily life. 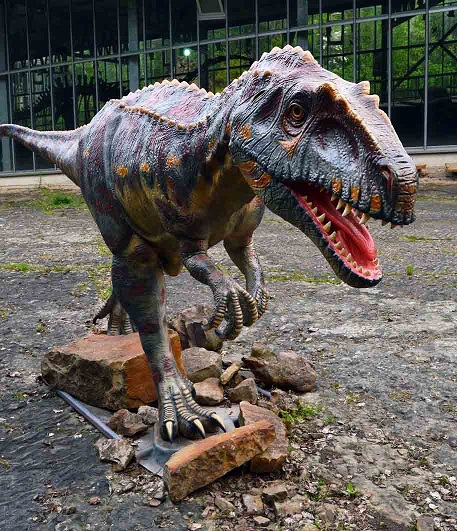 One is large, the other is small. They are in no hurry, they almost stroll along, leaving their footprints in the wet sand. From time to time they skid because it's hard to stand firm in the wet sand, but they keep their course and continue straight ahead.

A few times the small one has to trot in order to catch up with the big one. Their average speed is 6.3 km/h for the big one and 9.7 km/hour for the little one. It is notably slow for a carnivorous dinosaur that can run with more than 40 km/hour.

These and other details about the two animals that lived about 142 million years ago were presented by biologist Pernille Venø Troelsen from University of Southern Denmark on July 10 2015 at XIII Annual Meeting of the European Association of Vertebrate Paleontologists in Opole, Poland.

The ca. 50 footprints investigated were excavated in the period 2009-11 in Bückeberg Formation in Münchehagen in Germany, ca. 50 km from Hannover. For more than 200 years footprints and tracks of footprints have been found here.

A biologist looks at footprints differently than a geologist

The ca. 50 tracks investigated have previously been subject to a variety of geological surveys, but Pernille Venø Troelsen is the first to thoroughly examine them as a biologist, and this provides a different kind of information than the geologically based surveys. 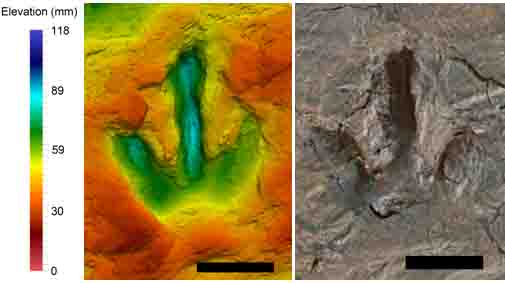 "As a biologist, I can contribute with knowledge about behavior of the individual animals", explains Pernille Venø Troelsen.

Based on analysis of the footsteps she has concludes that the two animals measured respectively 1.6 meters and 1.1 meters at hip height, and that they are probably carnivorous dinosaurs of the species Megalosauripus.

The little one has occasionally crossed its legs on its way, and according to Pernille Venø Troelsen there can be a number of reasons for this: Perhaps it lost its balance because it was slippery or the wind was strong, perhaps it found something to eat, or maybe it wanted to stick close to the big one.

"If so, this may illustrate two social animals, perhaps a parent and a young", says Pernille Venø Troelsen.

A growing number of findings point to the fact that several dinosaur species were social animals and maybe  hunted together and took care of their offspring after they were hatched. 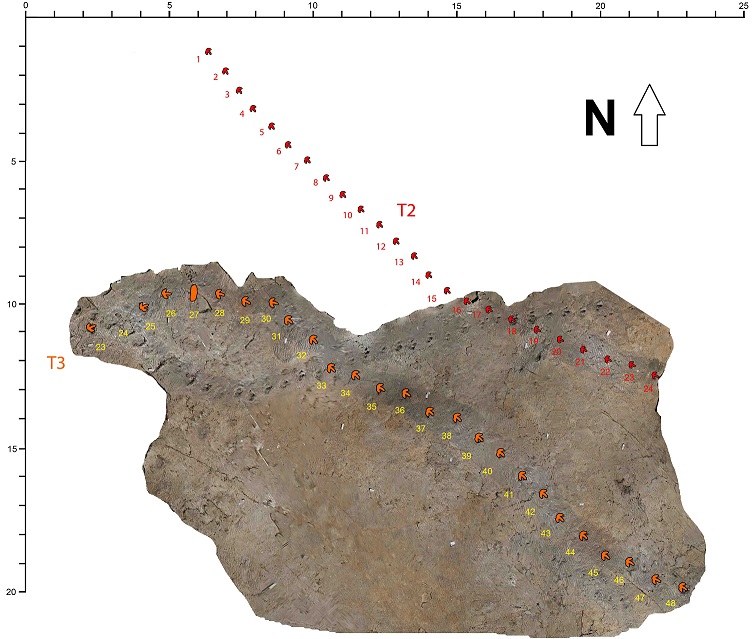 However, it cannot be determined whether the tracks from the small one and the big one were created at the same time.
"There may be many years apart, in which case it maybe reflects two animals randomly crossing each other’s tracks.  We can also see that a duckbill dinosaur (Iguanodon) has crossed their tracks at one time or another, so there has been some traffic in the area."

These carnivorous dinosaurs were agile hunters who walked and ran on two legs. They were of app. same sze as the velicoraptor, known by many from the film Jurassic Park.

Dinosaur footprints have been found in several European countries. Especially England, Northern Germany and Spain host hundreds of footprints from carnivorous dinosaurs, aged 140-145 million years old -  all from the same geological period as the footprints, examined by Pernille Venø Troelsen.