How to keep your New Year’s resolutions

Goals and motivation are among the most important factors for achieving what you set out to do.

The bar may be set too high and failure is just around the corner.

Because four cross dance sessions a week might be overkill, losing 1000 calories is underkill and shaving five minutes off your 5k by the end of the week is downright unrealistic.

There are many good reasons why your New Year’s resolutions don’t stick.

From smart idea to habit

Nikos Ntoumanis is Professor of Motivation at the Department of Sports Science and Clinical Biomechanics. His research focuses on why people find it so difficult to sustain behavioural change.

One of the answers is that the new activities have to become habits.

- Habits are automatic. You don’t need special motivation for habits – just a cue, for example, in time or place. It could be ‘at 5 p.m. on Mondays I go to football’, ‘when I come home from work I walk the dog’ or ‘I eat porridge for breakfast every day’, he says, adding:

- It’s important to be consistent, almost like a robot, when a new habit needs to be introduced. Always at the same time, in the same place and in the same way. If you are not consistent, it will never become a habit.

So the more you put your New Year’s resolution or other behavioural change into practice, the greater your chances of success.

Do it for your own sake

Another important factor is motivation. Why are you doing it?

- At first, doing something to look like or live up to others can be a strong motivation, but it doesn’t last. If you do it for others and have to be pressured to get it done, you’ll quickly give up.

Source: Martin Oscarsson et al., Stockholm University. NOTE: The figures are self-reported and the majority of participants in the study received support from family and/or friends.

At the same time, it is important not to be afraid to fail. It is not a disaster to have a piece of your colleague’s cake with your coffee, even if you want to lose weight.

Nor is it a failure to skip your run because there is a parents’ meeting at the nursery school and you are too tired afterwards.

- Remember self-care. You’re okay, even if you’re not perfect. Many of those who fail in their New Year’s resolutions fail because they give up completely the first time they fail, says Nikos Ntoumanis.

Give up the unrealistic

He advises against thinking in terms of black and white, either or. You have a much better chance of achieving your goals if you adjust them along the way.

- Never give up, they say. It’s a completely wrong approach for succeeding. You absolutely have to be able to give up goals that are not realistic. Maybe downgrade them so you have a chance for success.

Nikos Ntoumanis gives the example of a brand new runner who sets out to run three times a week.

He has decided when to do the three runs. Thus, the idea of creating a habit is present. He has also found a programme to run to, so he can track his runs and follow his progress. But what happens when he gets injured in week 2 (maybe because he started with an overly ambitious programme)? 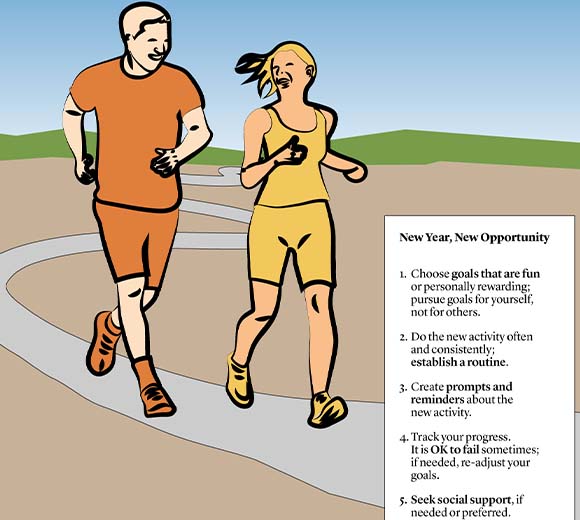 - There are several options here. If he continues to run as planned, even though he is injured, he risks increasing the damage. If he gives up and takes it as a sign that he is no good, it becomes a defeat that is difficult to move on from.

- The right thing to do is to make peace with the fact that a break is needed. And maybe to lower the bar a bit when he has recovered from the injury and run twice a week and not after an overambitious goal.

This is where we come to a key point in behavioural change. How do we deal with barriers?

- Have a plan B ready when you start on plan A. What do you do if it’s cold and raining when you go for a run? Then, for example, you’ve decided that you’ll go to the gym and run. It’s really good to have a plan for how you can succeed, even if things don’t always go according to plan.

Never give up, they say. It's a completely wrong approach for succeeding. You absolutely have to be able to give up goals that are not realistic

A final, important element of your behavioural change – especially if it’s a big one – is getting support.

It could be from family who support your weight loss efforts by not bringing home cake.

- Your chances of achieving your goal are also greater if you make the change along with others. Find a friend to go to the gym with, join a social community that already exists – it could be a running club.

- Sharing your plans and goals with others in general will allow you to have emotional support and backing. And your friends or family might know something about it too, so you can share knowledge and experiences to help you keep going.

Nikos Ntoumanis is a professor at the Department of Sports Science and Clinical Biomechanics. His research focuses on motivation and behavior change in health, education, the environment, and the workplace.