Lakes are threatened by rising temperatures

Lakes in cold and temperate climates are important tools for sequestering carbon. But with rising temperatures, we are losing this tool, a new study shows. Instead, we should look for other places to store carbon, says expert.

- At our latitudes, shallow lakes are effective at sequestering carbon and thus preventing CO2 from escaping into the atmosphere. Or at least that used to be the picture – it is not going so well anymore.

Henning S. Jensen has spent most of his academic life studying the health of Danish lakes and streams. Recently, he and colleagues have published a scientific study of how temperature rises affect shallow lakes, which are with a maximum depth of 3-4 meters.

Carbon is released into the atmosphere instead

The study's conclusions are based on an 11-year experiment in which the researchers exposed 24 small lake environments to various influences.

The researchers followed 24 so-called mesocosms over 11 years. A mesocosm is an outdoor experiment that examines the natural environment under controlled conditions. Over the years, they were exposed to temperature rises, changes in nutrient supply, etc. 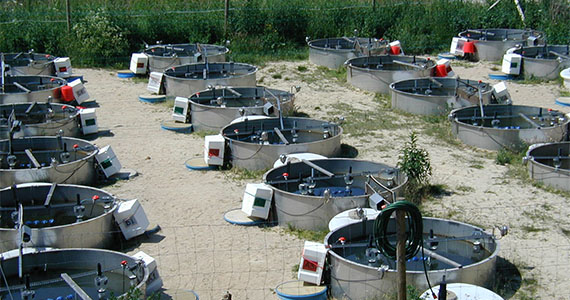 - One of the things we saw was that rising temperatures affected the sediment's ability to store carbon. Since we assume that the mechanisms are the same out in the real lakes as in our scientific experimental environment, this means that today, less carbon is bound in the sediment of shallow lakes than before. It will be even less in the future, says Henning S. Jensen.

The reason is that more organic material gets broken down in the lakes when the water gets warmer. This releases carbon into the atmosphere as opposed to material that does not get broken down but is allowed to sink and be stored in the lake bottom.

Reed and cattail are good plants for binding carbon

Henning S. Jensen does not find it realistic to stop this development. Instead, he recommends looking for other places in temperate and cold regions to bind carbon.

- In such an environment, plants like reed and cattail have access to plenty of sun, water and nutrients. If they spread, they will eventually turn into peat, which is very efficient at binding carbon, he says.

Peat is plant material, that accumulates in wet environments. Peat layers can be several meters thick, and in the past, peat was dug up, dried and used as fuel. If we leave the peat in the ground, it will store carbon.

In Denmark, nature offers several different services that stores carbon: these are, for example, forests, eelgrass meadows and salt marshes.

Henning S. Jensen is an expert in freshwater environment and lake restoration and associate professor emeritus at the Department of Biology.