Eleven robotics researchers from SDU are now able to call themselves the world’s best in industry robots. The team, SDU Robotics, won within the category of industry robots at the World Robot Challenge held in Japan this weekend.

In the competition, which in robotics circles is considered the unofficial world championship in robotics, the team beat, among others, Cambridge Robotics.

- It’s an amazing feeling for the team. The result was delayed, so we were quite nervous even though we believed that we had made it. During the past six weeks, our programming experts especially have been working extremely intensely, so it is a major release, says the team’s leader, Christian Schlette, from SDU robotics.

During the past six weeks, our programming experts especially have been working extremely intensely, so it is a major release.

Team SDU Robotics consists of experts in, among others, computer vision, robot control, software and mechanical design. Together, they have created their proposition for the robot production cell of the future.

And they have done this so persuasively, that among 250 applicants from all over the world, they were one of the 16 chosen robot teams allowed to participate in the competition – and now, they stand as winners.

- It is fair to say that we are the best in the world at solving the industry’s challenges with automating complex tasks such as assembling objects that are scattered randomly in a box, says professor Henrik Gordon Petersen from SDU Robotics who is one of the team’s 11 members. 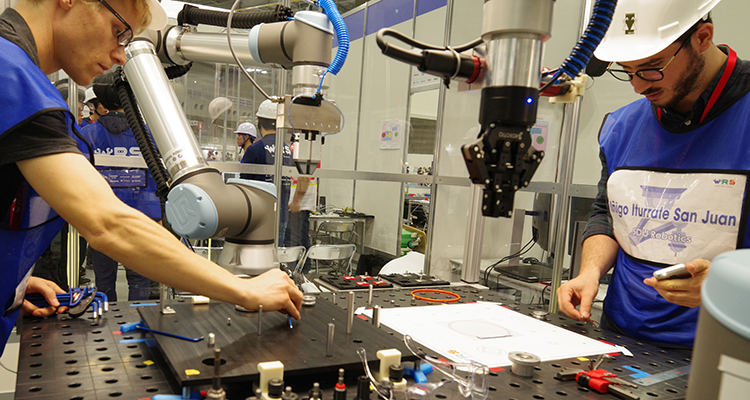 Rather than kicking balls into goals, the World Robot Challenge is about being best at finding robot solutions that meet the industry’s demands. One of industry’s biggest problems is to find flexible robot solutions able to find things in boxes and screw things together.

The team was tested in three sub-assignments, receiving points after each assignment. Midway, the team was, among other things, faced with the dilemma whether to focus solely on winning or on solving the task.

- We have never participated in a competition before, and of course we made mistakes underway, both professional and tactical. For example, we could have gotten more points if we had focused on maximizing our points instead of solving the problem at hand. However, we are ambitious and pursue problem solving, underlines Professor Henrik Gordon Petersen.


The robot cell of SDU Robotics is made up of two medium-sized industrial robots facing each other. Between them is a work desk, monitored by cameras.

- The unique thing about our cell is that it is so flexible. It is an open robot work cell, which makes it easy to expand it into a larger production set-up.

- And beyond fully automated operation, it allows for direct collaboration with people working closely together with robots”, explains Christian Schlette.

The competition demonstrates that we are both nationally and internationally at the forefront and therefore we can help the robot companies to make the robots more intelligent and faster to adapt to the task they need to solve.

Earlier this year, it was announced that the University of Southern Denmark invests over $ 100 million in an Industry 4.0 Lab, which is to make companies, researchers and students ready to turn the fourth industrial revolution into innovative products and smarter production.

And when the robot cell returns home from Japan, it will become part of a groundbreaking production environment in the upcoming laboratory.

- The competition demonstrates that we are both nationally and internationally at the forefront and therefore we can help the robot companies to make the robots more intelligent and faster to adapt to the task they need to solve," says Head of Department Kasper Hallenborg from the Maersk Mc-Kinney Moller Institute, SDU, and continues:

- The robot cell from the competition is a great example of the possibilities for flexible production offered by an advanced production cell. Just think of the possibilities when we start to put them together and involve collaborative elements where people work closely and naturally with robots – as we will also be working on in SDU I4.0 Lab.