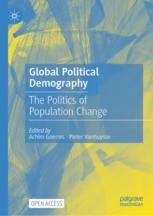 Together with Achim Goerres (University of Duisburg-Essen), Pieter Vanhuysse is bringing out a coedited book contracted with Palgrave in open access on ‘Global Political Demography: The Politics of Population Change’. The book aims to present a big-picture descriptive analysis of the interplay of demography and politics in all major macro-regions of the world. We asked our contributors (predominantly hardcore demographers) focus on the major political aspects (causes, consequences, processes) of demographic change (whether population ageing, youth bulges or migration) since 1990 and up to 2040. All analyses of the book are internationally comparative. Macro-regions that we will be covering include:

All macro-region chapters have been written by experts both in the discipline and in the particular region in question, including for instance by the deputy director of the Moscow Institute of Demography and Russia’s foremost demographer Sergei Sakharov on Russia, Ukraine and Belarus and by the Director of International Institute for Population Sciences in India, K.S James. In addition, to better frame these macro-regional analyses we also have commissioned chapters on:

“Political demography takes a major step forward in this volume, whose global scope is unprecedented. This book is filled with essential findings for all scholars of politics and development.”
— Jack A. Goldstone, Schar School of Policy and Government, George Mason University, USA

“This book is a tour de force. Achim Goerres and Pieter Vanhuysse provide the first comprehensive treatment of the interplay of demography and politics around the world over half a century, from silver populations to migration flows, from youth bulges to religions. This is a must-read for everyone concerned about global demographic shifts and the big forces shaping our common future.”
— Tomas Sobotka, Wittgenstein Centre for Demography and Global Human Capital, Austria

“Covering every continent, Global Political Demography performs the vital task of bringing together the world's leading scholars of the politics of population change. They help us make sense of the trends that are shaking the foundations of our modern world.”
—Eric Kaufmann, Birkbeck College, University of London, UK

With demographer Robert Gal; Pieter Vanhuysse is engaged in a series of research project on what generations trandfer to each other and the roles of states and families therein. For instance, they have asked what resources generations give each other. From different angles, the latter two papers both argue that notwithstanding decades of ‘social investment states’ rhetoric, we actually observe surprisingly little state investment in young people.
Looking at public policies alone offers an incomplete and biased picture of intergenerational transfers. It’s a proverbial case of looking for a lost car key only where the streetlight shines at night. The reason is a key asymmetry in modern societies. Working-age people pay taxes and social security contributions to institutionalize care for older persons as a generation. But they invest substantial private resources (money and time) to raise their own children, often with large social returns. Once one also incorporates these family resources, counterintuitive and radically different conclusions follow. Children actually receive more than twice as many per-capita resources as older persons in Europe – but not from policies. We live in
pro-elderly welfare states within child-oriented societies.

A key ethics and public policy question is therefore: why do states not take a greater role in helping families raise children? Economist Nancy Folbre, sociologist James Coleman, and political philosophers Anne Alstott and Serena Olsaretti, among others, have forcefully argued that children are also public goods. Their contributions will later benefit all of society, including non-parents. Since children are also ever scarcer in aging societies, we ask: why has child investment not been socialized much more than we can observe in reality?

Is there a rising risk of more unequal ageing? Inequality in old age is a reflection of individuals’ paths over their entire life course.

Younger generations in Europe today are likely to face higher inequality in old age due to less stable labour market conditions and widening inequalities in the distribution of earnings and household income.

The reduction of inequalities inside societies must be tackled by measures addressing both intra-generational and intergenerational inequalities.  In order to equalise life chances, state transfers for high quality education and care for children (especially from disadvantaged backgrounds) should increase substantially.

With Clara Sabbagh, Pieter Vanhuysse has studied the remarkably strong and internationally consistent perceptions of intergenerational injustice among young people, and of pensions injustice among adults.
In
Ageing Populations in Postindustrial Democracies, co-edited with Achim Goerres, Pieter Vanhuysse has infused a sense of empirical variation and political-institutional refinement as a counterbalance to increasingly shrill and alarmist assertions about ‘gerontocratic’ welfare states dominated by unholy baby boomer alliances of ‘greedy grey’ voters and ‘myopic’ or populist politicians. Achim and I are currently working on a book on Global Political Demography. Demography is not destiny: governance cultures matter more than pure population aging in explaining policy biases and grey power – or their absence. With Markus Tepe, Pieter Vanhuysse has tried to inject empirical and institutional qualifiers into sweeping claims about how population aging causes gerontocracy politics in pensions, pension cutback delays, and elderly-biased welfare states.

Studying the
intergenerational justice of public policies in rich democracies at the invitation of the Bertelsmann Foundation, Pieter Vanhuysse has developed a four-dimensional snapshot indicator of intergenerational justice (IJI), including a new measure of elderly bias in social spending (EBiSS). Pieter Vanhuysse has also been part of the team that developed the first Active Aging Index for the Commission, in the context of the European Year for Active Ageing and Solidarity between Generations.