This fall three international PhD students have joined QM. They came from German and Dutch universities. One of the new PhD students even has three Master degrees.

One of the new students, Calvin Pfeifer, is being supervised by Professor Christof Geiss and is interested in representation theory with particular emphasis on categorification of cluster algebras and applications to quantum physics. Calvin Pfeifer obtained his master’s degree in Mathematics in 2020 from Rheinishe Friedrich-Wilhelms Universität, Bonn under the supervision of G. Jasso with the thesis title: “Torsion classes and wide subcategories”.

The other two new students, Santiago Quintero de los Rios and Tim Henke are both supervised by Centre Director and Professor Jørgen Ellegaard Andersen and are part of the ERC-Synergy project ReNewQuantum.

Santiago Quintero de los Rios’ scientific interests lie on the boundary between Geometry and Physics. He obtained a master’s degree in Mathematics in 2020 from Utrecht University under the supervision of Gil Cavalcanti with a thesis concerned with applying Seiberg-Witten theory to prove Donaldson’s theorem on the intersection form of four-manifolds.

Tim Henke has a tripel master’s degree. He obtained his double master’s degree in Mathematics and Physics in 2020 from University of Amsterdam under the supervision of Erik Verlinde and Hessel Posthuma about the Nekrasov partition function in four dimensional supersymmetric gauge theory using instanton counting. Further Henke has a Master in Logic from 2019 also from University of Amsterdam focusing on the expressive power of mathematical languages and foundations. 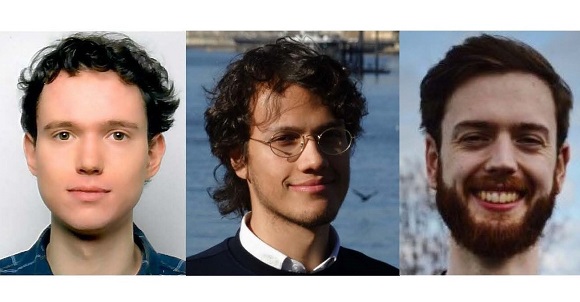