Carlsberg grants to Emily and Anders

“Feminized: A New Literary History of Women’s Work”, a new 3-year project funded by the Carlsberg Foundation, will ask how aesthetic and thematic engagements with conventional forms of women’s work in twentieth-century global anglophone literature contribute to the understanding of a major trend in contemporary global labour markets: the feminization of work. In recent years, theorists have frequently described contemporary global labour conditions as “feminized”, meaning that the experiences and practices once primarily associated with women workers are becoming the standard for the labour market in general. This project will situate twentieth century literary texts which engage with women’s work in relation to contemporary theories of feminization, showing that the archive of global twentieth-century literary representations of conventional types of “women’s work” constitutes a rich, as-yet untapped resource for understanding the trend towards feminization in the twenty-first century work world.

Emily: This funding from the Carlsberg Foundation allows me to further build on and develop the work I have been doing as a member of the Uses of Literature project since 2017, where my research has focused on the social dimensions of literature related to precarity and class. The new project will begin in September 2021.

Associate Professor Anders Bo Rasmussen has received a Carlsberg Foundation Monograph Fellowship
"Louis Pio’s American Dream: Transplanting Socialism in the face of White Supremacy, 1875-1895”
It has been almost 125 years since the Danish labor leader Louis Pio died in Chicago during the 1894 Pullman Strike. Yet, the transnational currents of social democracy, class solidarity, and “white working class” politics that shaped his late-nineteenth century world continue to ripple through both Denmark and America.
By recalibrating prevailing narratives of the early Danish and American labor movement through an analysis of how socialism was transplanted to, and challenged in, the United States, this project offers a Danish-American answer to one of the most striking questions in international historiography: Why is there no socialism in the United States?
Building on rich newspaper and manuscript archives across America, not least the city of Chicago which was home to the era’s most important labor struggles (e.g. the 1886 Haymarket Affair which led to the 1st of May International Workers’ Day), this monograph proceeds from the hypothesis that Scandinavian socialists like Louis Pio arrived in the United States convinced that international class and gender solidarity held the key to remaking the world, but found themselves shackled to—and ultimately remade by—American ideas of white supremacy.

CONGRATULATIONS to Emily and Anders! 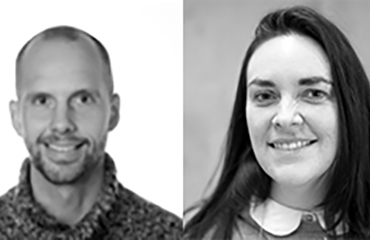