Jes Jepsen, who is about to specialise in Unmanned Aerial Systems (Drone Technology), dreams of combining the new technology with a business of his own. 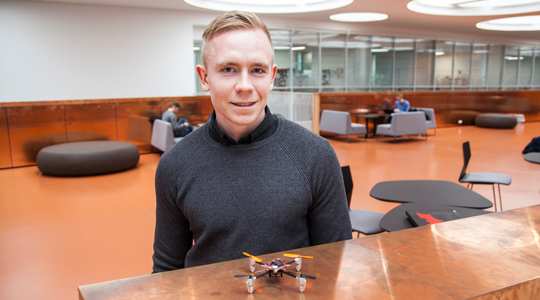 "I thought that the specialisation in Unmanned Aerial Systems (Drone Technology) sounded really exciting! We will be the first year of students to go through the programme - and I want to be involved in the development right from the start," says the 25-year-old student.

"Unmanned Aerial Systems (Drone Technology) represents new opportunities because you are working with three dimensions. You can develop completely new applications and have many more opportunities than if you are developing things like cars that can only move in 2 dimensions, or robot arms that have a limited reach."

"At the moment, we are about to build a drone from scratch. That is to say, we're starting with existing hardware and software and looking at how to build communication between the drone and the user and solving other problems that arise when building from scratch. Part of the project is also about finding the most optimal drone design so that we can secure the longest possible battery life by finding a light and durable material with which to build the drone."

On the study programme, the students will also learn about the law in relation to drones: a new area that is highly topical and includes issues such as safety and privacy.

"Our teaching takes place in small groups, so sometimes it gets very intense and is more like a dialogue with the teacher, which is very rewarding. That actually applies to the programme in general, that you can have a more personal relationship with the teacher," explains Jes. In his spare time, he works as a programming assistant at Blue Ocean Robotics who are also helping to give him a lot of experience in robot technology.

Entrepreneur in Unmanned Aerial Systems (Drone Technology)
Jes has ambitions of being self-employed, and with this in mind he participates in different workshops and entrepreneur projects he finds relevant, such as SDU's HealthTech Innovator:

"I'm focusing on creating an interdisciplinary network because I can see a great advantage in being able to draw on the knowledge and expertise of others to get different perspectives on a potential problem. Idea development interests me a lot, and through interdisciplinary collaborations I get the opportunity to learn about business plans, finance and marketing from the other students," says Jes, who is still working on finding just the right idea. But it is certain that it will be something to do with drones.

"The area of drones is still new and undergoing rapid development. The only requirement is having the imagination to come up with possibilities for the use of drones in the future - and the right team to transform the ideas into reality," he says.