Among the 100 attendees were heads of departments, representatives from the Faculties’ local gender equality boards, and also several members of SDU’s Executive Board including the Vice-Chancellor.

As part of the new gender equality initaitive, the Executive Board itself has requested a workshop on unconscious bias, one of the initial three GE-focal areas. This workshop took place on the same day, prior to the afternoon’s kick-off symposium.

In the afternoon, the Dean of the Faculty of Science and chairman of SDU’s central gender equality board, Martin Zachariasen, started the symposium with a brief presentation of SDU’s strategic gender equality initiative.

Martin next introduced the convener of the symposium, Dean at the Faculty of Business and Social Science, Nikolaj Malchow-Møller, who facilitated the rest of the symposium's program. The main part of the symposium consisted of short presentations by the members of the International Gender Advisory Board. 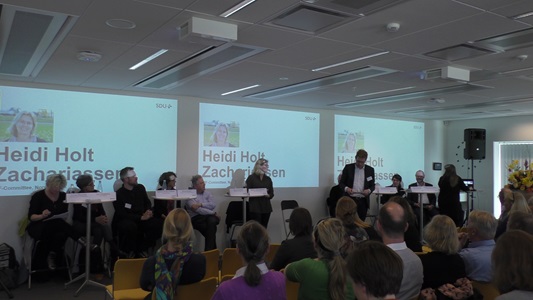 Included in the various recommendations from SDU’s International Gender Advisory Board were:

Following the presentations, the recommendations were elaborated and discussed with reflections and questions from the attendees. Lively discussions emerged on subjects such as the Danish and European political framework for genedr equality work at the Danish Universities, how it is both useful and problematic to work actively with unconscious bias, and how gender equality change agents can benefit from approaching such work as “tempered radicals”.

The kick-off symposium concluded with an early evening reception where the themes and discussions of the day continued.