GET featured in Nordic media

Dockweiler’s opinion piece highlights the tension between a steadily growing demand for ground-breaking and excellent Danish research, and the fact that the number of women in professor- and associate professor positions in Denmark is lower than the total average of the EU. The gender equality work in Denmark has generally suffered due to a somewhat subdued national political focus, and Dockweiler emphasizes how important it is for such equality endeavors to resurface and become a high priority on the strategic agenda in the university sector. As the first Danish university to establish a Gender Equality team, SDU takes an important step in this direction. Dockweiler stresses that there is dichotomy between improving research and increasing the diversity on Danish universities.

In August 2018, Norwegian kifinfo.no published an article about SDU’s new gender equality initiative and establishment of the Gender Equality Team (GET). 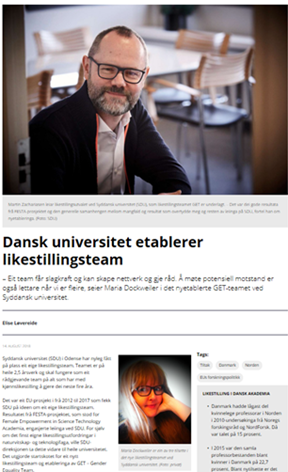 The Norwegian website Kifinfo is run by the Kilden information center on behalf of the Norwegian Committee for Gender Balance and Diversity in Research (KIF). It is an information hub disseminating various news and activites related to gender and diversity in the higher education and research sector. Maria Dockweiler was interviewed for the article, and she points out that it is unusual to see a Scandinavian country positioned far behind other European countries when it comes to gender equality. The establishment of the new Gender Equality Team achieves greater clout, and thus has a real chance to make a difference in the field of gender equality, Dockweiler says.

Chairman of SDU´s Central Equality Committee and Dean of the Faculty of Science, Martin Zachariasen, was also interviewed for the article. He explains how SDU’s management decided to take more responsibility on the gender equality agenda when they saw that progess was almost sluggish. Zachariasen believes that there are multiple reasons for this, such as poor parental leave schemes and “macho-culture”. Management believes that diversity and gender equality will improve both the working environment and the research on SDU, Zachariasen says.

The article also highlights the establishment of the GEAR:DK-network (Gender Equality in Academia and Research in Denmark), where SDU´s GET is a part of the steering committee, and GET´s establishment of a new database with gender equality data about SDU.