The Innovation Prize is presented to an SDU employee who has taken a completely new and innovative approach to showcasing SDU expertise in the field of education or research, and who has generated value for – and with – society. 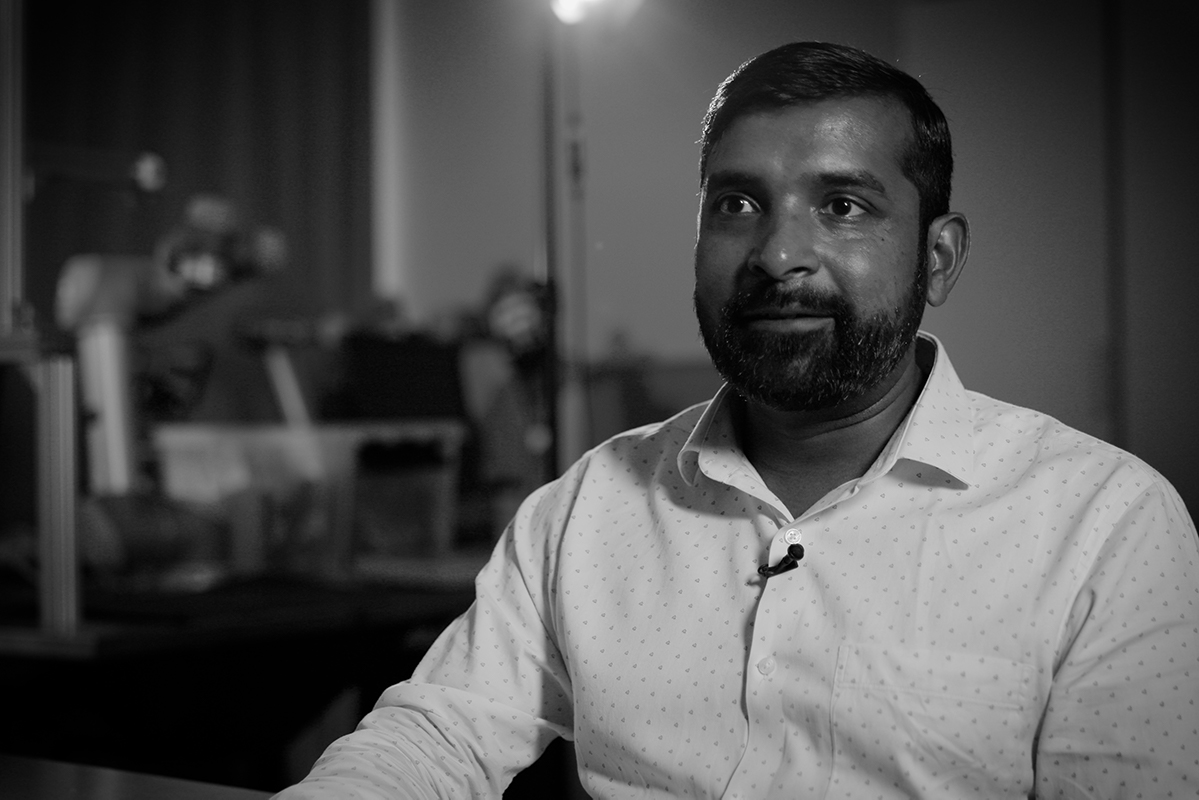 The Faculty of Engineering has decided to award Professor Thiusius Rajeeth Savarimuthu this year's Innovation Prize for his efforts in developing advanced robot technology for industrial and medical applications. Rajeeth has an innovative mindset and a unique ability to see how his research results can be applied and realised in advanced products. As head of Medical Robotics at the Maersk Mc-Kinney Moller Institute, Rajeeth has managed to create a close collaboration with a number of medical research groups both internationally, at SDU and at OUH, where he is a bridge-builder between the medical and robotics domains.

During his time as a PhD student, Rajeeth researched purposefully in automating blood sampling to relieve laboratory staff. As head of research, Rajeeth has garnered great acclaim from other researchers for his ability to establish fruitful collaborations and carry out major research projects. Examples of this are ROSOR (2014-2020), which is a project on surgical robots, and AIID (2018-2021), which works with diagnosing retinal damage in diabetic patients. In collaboration with chief physician and researcher, Søren Andreas Just from OUH, starting in 2016, Rajeeth has developed a scanning robot for automating ultrasound samples on arthritis patients. The robot is based on advanced computer vision, artificial intelligence and power management and is now being developed and marketed in the spinoff company Ropca Ultrasound.

Rajeeth's interest in combining robot technology with challenges in healthcare is due, among other things, to a research stay at Johns Hopkins University, where he was a visiting scholar in 2010. Here he worked with new methods for visualising anatomical structures using infrared light. His efforts led to a patent. Later that year, he got the chance to work as a Medical Vision Engineer at the company Intuitive Surgical Inc., the world's leading manufacturer of surgical robots. Rajeeth believes that his success as a bridge-builder between research and practice stems from the project-based engineering education he received from SDU, where solid core competencies go hand in hand with the search for advanced technical solutions.

Rajeeth's latest achievement, and a weighty argument for his candidacy for this year's Innovation Prize, is a groundbreaking and remarkable effort to develop a throat-swabbing robot for testing for COVID-19. Within about four weeks in April-May, Rajeeth and his team managed to build and test a swabbing robot. The world’s first robot of its kind, it was unveiled to the public in May 2020 and has since received great international acclaim and interest. So far, the robot has been mentioned in a large number of Danish and international media: Feature on DR’s 9 o’clock news [6:30 pm - 9:10 pm]; a video feature about the swabbing robot, a video feature about LifeLine Robotics and the parties behind, as well as articles in Robot Report, Automation Praxis and features on Fox35.

This completely unusual process was made possible by a close and flexible collaboration between SDU and some far-sighted contractors from Funen’s robot industry, who have established the company Lifeline Robotics for this purpose. The investment capital comes from the Norrsken Foundation and ReInvest Robotics as well as from SDU. In addition, Vækst-fonden (the Growth Fund) has pledged to co-finance the next phase of development. The swabbing robot has enormous business potential as it can increase the capacity and quality of throat swabs, protect healthcare professionals and relieve them of monotonous work. In addition, the robot can be used for testing for a wide range of other viral diseases and be a front line in places such as airports and refugee camps.

Thus, over a relatively short career, Rajeeth has repeatedly shown that he is successfully able to balance between the role of top researcher in robot technology and imaginative innovator who understands knows how to translate his knowledge into groundbreaking technical and socially beneficial solutions. So far, it has resulted in three patents (with four more pending), created the basis for two new companies and led to a number of innovative solutions in existing companies. In addition, for approximately the last five years, Rajeeth has served as a commercial advisor to robot companies on the prospects of implementing new technologies and developing their growth and strategy plans.