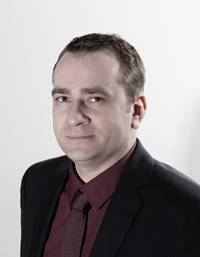 It's now about four months since I joined SDU Robotics in January 2017 - time for briefly introducing myself...

I received my Dipl.-Ing. in Electrical Engineering from the University of Dortmund, Germany in 2002 and joined the Robotics Research Institute (IRF) in Dortmund as research assistant to develop control approaches for industrial multi-robot systems. In 2005/2006, I worked for EFR­Systems GmbH, Dortmund as research assistant for commercially oriented research in 3D simulation. In 2006, I joined the foundation of Institute for Man-Machine Interaction (MMI) at RWTH Aachen University, Germany as principal investigator and head of the group "Industry", where I was responsible for the design and implementation of robotic applications and systems in various national and international research projects, e.g. multi-robot systems, highly redundant manipulators, assembly cells and systems for field robotics, with partners from academia and industry in the fields environment, industry and space. I received my doctorate summa cum laude (Dr.-Ing.) from RWTH Aachen University in 2012 and was awarded with the "Borchers medal" for my thesis.

Actually, I already knew SDU Robotics quite well, since I collaborated with Norbert, Henrik and the others in the projects IntellAct (FP7) and ReconCell (H2020) before. Beyond these two EU projects, I was also involved in the projects CENTAURO (H2020), DeLas and Scalab (ERANET), FastMap and SELOK (DLR) and ProDemo I+II.

My research interests include:

I am looking forward working with you!