Vibrations are important and it can be hard to get the frequencies right. When the string was cut and the Tacoma Narrows Bridge inaugurated on July 1, 1940 in Pierce County, Washington, it could boast the title of the world's third longest suspension bridge. A title it only carried for a very short time, however. Just four months later, the bridge collapsed dramatically.

Already during the construction of the impressive suspension bridge, it was nicknamed "Galloping Gertie" by the construction workers, because when the wind grabbed the bridge, it swung from side to side. On November 7, 1940, a storm was blowing up, and when the wind hit at full strength, it set the bridge in such great oscillations that it eventually collapsed. Incredibly, the accident cost no lives. The only victim was the cocker spaniel, Tubby, who crashed with a car left behind as the bridge could no longer withstand the forces of nature. Professor Frederick Burt Farquharson, an engineer from the University of Washington who had been involved in the construction of the bridge, desperately tried to save the dog, but was bitten by the terrified cocker spaniel and had to give up his heroic deed.

The cocker spaniel Tubby's ultimate sacrifice on the altar of science, however, was not in vain. The accident set new standards for the design of suspension bridges. And the Tacoma Narrow Bridge is a brilliant example of why it is important that oscillation theory is a mandatory part of the Master’s programme in Structural Engineering today.

“Vibrations are something that really fascinates our students, everyone is immediately fascinated when watching videos of Tacoma Narrow Bridge or a stadium that literally swings because the spectators are jumping simultaneously when cheering their scoring team. But at the same time, it can be difficult to understand the mathematics behind it. That is why the vibration platform is very important, because with it the students can do practical experiments and see for themselves how the vibrations behave,” says associate professor Sine Leergaard Wiggers, who is head of Structural Engineering at SDU Mechanical Engineering, Department of Mechanical and Electrical Engineering.

The device thus helps to support a guiding principle at SDU's engineering programmes, namely that theory must be transformed into practical experience.


Why the bridge collapsed


The vibration platform has a unique ability to explain natural frequencies, attenuation and waveforms. At the critical wind speed on that fateful day, vortices behind the bridge were thrown at a frequency which coincided with the natural frequency of a slightly attenuated waveform of the bridge.

It made the bridge swing a bit in this shape. Unfortunately, these oscillations amplified the harmonic, aerodynamic forces of the wind, which therefore increased the amplitude of the oscillations further until their magnitude and number caused the bridge to suffer a "low-cycle" fatigue fracture.

"Ultimately, it is about giving our engineering students a deeper understanding of the theory of oscillation."

Sine Leergaard Wiggers goes on to say that the vibration platform demonstrates the most classical, fundamental, mathematical models that are used in the teaching. 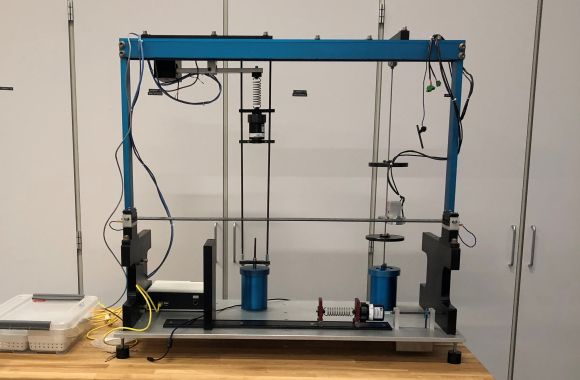 The system can also be used by the students themselves. They can test and vary materials, masses, spring stiffness, viscous damping and more and thereby gain a better understanding of the mathematical models and their solutions.

The classic models for vibration are essential for the engineering students, so they understand the basic concepts in vibration theory. It is necessary to understand this in order to be able to work with the design and optimization of new or existing systems (machines, buildings, etc.) from an oscillation point of view.

“A classic model can e.g. be a spring and a mass which oscillates vertically as shown in the picture. The mathematical theory we can use to predict how the system will vibrate and the test equipment can be used e.g. to verify the mathematical model. Of other classic fundamental models, with the demonstration equipment you can also look at one or more masses that oscillate horizontally, a beam that is supported at each end that oscillates, or how a system with rotating masses oscillates.”

We want to focus on all the fantastic equipment we have at the Faculty of Engineering. That's why we are bringing the article series 'So ein Ding', the headline of which we have stolen from a popular DR programme, which deals with electronic gadgets. Because when it comes to electronic equipment, there are few who can compare with SDU.

SDU has thousands of electronic devices that you will not find at home or in your company. And the cool thing is, you can make use of them. SDU kindly provides knowledge and equipment if we can establish a joint project.

In this first edition of the article series, we focus on a vibration platform that Fabrikant Mads Clausen Fond together with PA Fiskers Fond has donated to the Centre for Industrial Mechanics.

The test and demonstration rig can, e.g., demonstrate the following: