Measurement of industrial components for LODAM

By collaborating with SDU and the Mads Clausen Institute, you can get access to world-class technological equipment and by this become a forerunner regarding the development of ground-breaking technology. LODAM, which is a producer of high-technological products within cooling, heating and ventilation, is one of those companies that has benefitted from this when they had sent electronic components to SDU for a closer look.

LODAM is a big player on the global market for intelligent electronics within ventilation, heating, air condition and cooling systems. For many years, the company has successfully worked together with SDU in connection to education and research, which has been in both LODAM’s and SDU’s favour.

When LODAM earlier this year received a batch of electronic components with defects from a sub supplier, they immediately suspected small tin fibres being the cause. A phenomenon that is called formation of tin whiskers.

Tin whiskers can occur on metal surfaces in connection with mechanical, heat-related or electrical stress. In these cases, ultra-thin fibres of metal grow out from the surface, which sometimes can cause short circuits. The phenomenon has, among other things, caused defects in nuclear power plants, pacemakers and satellites.

To confirm their suspicion, the company sent a number of samples to the Mads Clausen Institute at SDU to get the fibres visualised and by this get the cause for the problem confirmed. A SEM/EDX-investigation revealed that LODAM’s engineers were absolutely right about their assumption. You can see the exemplary images here: 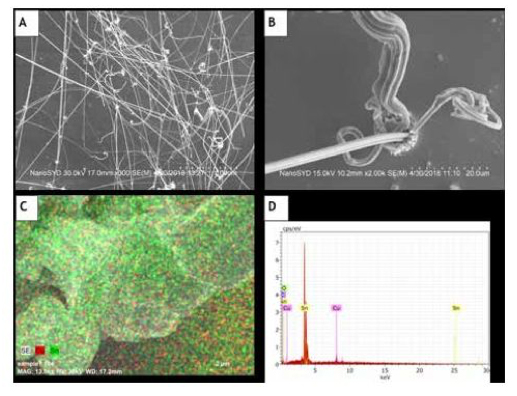 Image caption: SEM of fibre network present on the surface of a sample (A). Zoom in on a formation site of a fibre, indicating fibre formation from the underlying layer (B). EDX element mapping of a fibre on a surface (C) and the relevant spectra (D).

The result of the SEM imaging revealed a complex network of fibres on the surface of the samples. The fibres grow from the underlying tin and break through the copper surface where they can lead to shorts in electronic circuits. The EDX analysis made it clear that – just as expected – mostly all fibres were made of tin with only slight traces of copper.

Even though the imaging to a large degree just confirmed the LODAM engineers’ expectations, B.Sc.E.E. Senior Hardware Engineer, Jørgen Rasmussen, attributes a large value to it.

- It is always good to see things with different eyes.

Jørgen Rasmussen who works in the Motor Control section, informs that next year, LODAM is going to start a number of experiments in which the company will test new coatings for the aforementioned components.