Civil Defence and the Nuclear Threat: A Study of Imaginaries, Culture and Materiality 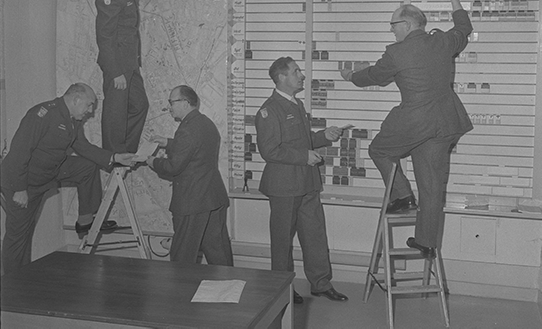 This subproject provides an innovative study of Danish CD during the late Cold War and advances an international research agenda on CD and materiality.

It has three components.

Firstly it will develop an analysis of Danish civil defence architecture in the late Cold War period (1963-89) and explore how political and cultural narratives of welfare and warfare were reproduced and materialized.

From the 1960's, Danish nuclear civil defence became increasingly incorporated into the architecture and ideology of the expanding welfare state: Schools were built with extra wide doors and running water in classrooms, so they could easily be transformed into emergency hospitals; public buildings such as libraries and city halls were equipped with fallout shelters; public parks were secretly appointed areas for emergency cemeteries.

Secondly, it will conduct a specific and localised comparative case-study of urban civil defence planning in three cities: two British (Liverpool and Sheffield) and one Danish (Aarhus) The study will focus on the late 1970s and 1980s. Civil defence has in always been an aspect of city building, but this was more urgent in the Cold War, as policy makers considered cities with high concentrations of inhabitants especially vulnerable. The project will examine how national civil defence policy translated into urban civil defence, how post-war cities were imagined and what was particularly urban about this, and assess transnational similarities and differences between a nuclear and a non-nuclear European state.

Finally, a case study of ‘the shelter’ both as a metaphor and as a material structure will trace and map the post war development of shelters in Denmark and examine the role of materiality in the production of cultural meaning.