The PLEO rb is a perfect choice for studies about human-robot interaction. It resembles a baby dinosaur and it has the compact size of a young cat. His large expressive eyes break the heart of any bystander and it has a wide range of possible behaviour patterns. 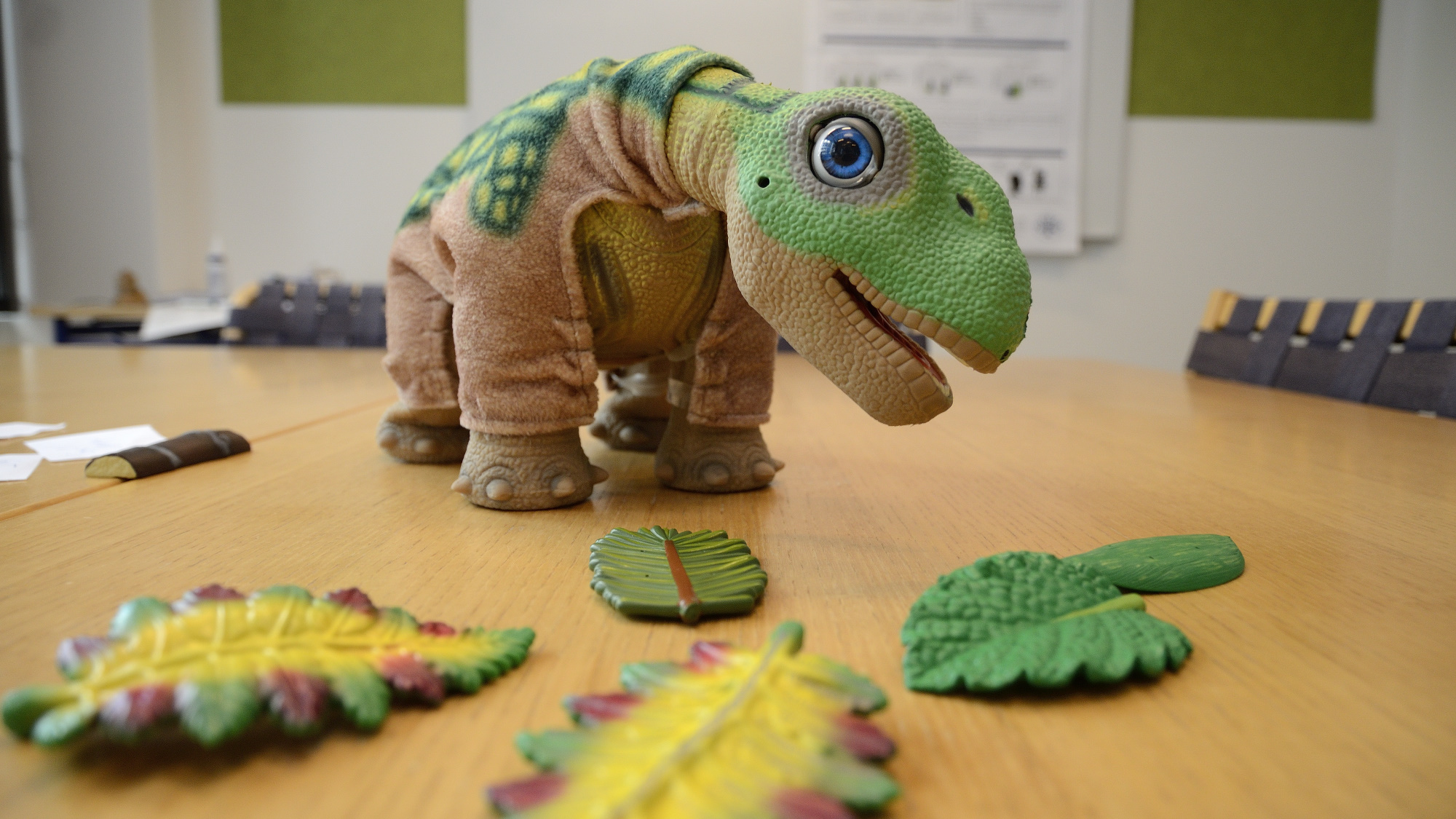 The PLEO rb is a pet dinosaur that resembles a baby Camarasaurus dinosaur. The “rb” in the name of the robot is an abbreviation for “reborn”. The PLEO rb is not manufactured after the real dinosaurs size, shape and behaviour. This comes in handy because the Camarasaurus was a genus of large herbivore dinosaurs with impressive lengths between 15 and 23 meter. In comparison, the PLEO rb has the compact size of a cat. It is covered with a soft coat, has large expressive eyes and likes to be cuddled just like a pet. 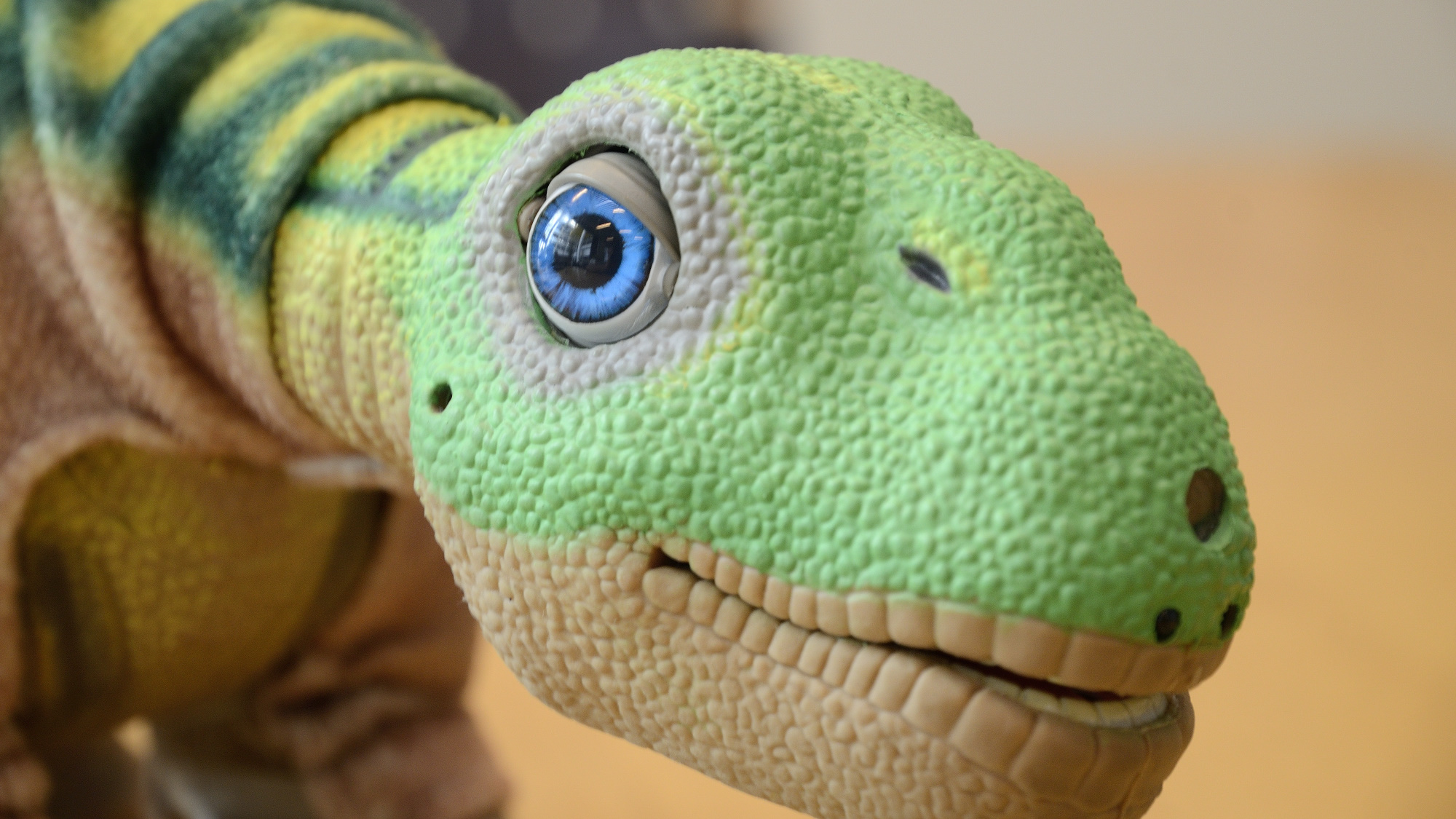 It has  large expressive eyes and movable eyelids.

The aim of the aforementioned gender study was to find out, whether women show more emotion and affection around the robot in comparison to men. Pleo was the perfect robot for this experiment since it resembles a baby dinosaur. It can react to different stimuli around it, such as touch, pain, brightness or darkness. It is also able to show when it is scared, happy, sad or even hungry. It can learn how to walk, or even dance, it can learn that its name is Pleo and it is able to establish a communication with other Pleo robots as well.

Its behaviour is realistic to that extent that sometimes it is hard to believe that it is just a machine and not a being with needs and emotions.

The toy robot PLEO rb is perfectly suited for human interaction. Its charming appearance, its pleasant haptics and its doe-eyed look help the robot to quickly establish an emotional connection to humans.  The robot cannot speak, but it displays such sophisticated behavioural patterns that you can interact with it like with a real pet.

The robot enjoys being cuddled. It actively requests a certain amount of petting. 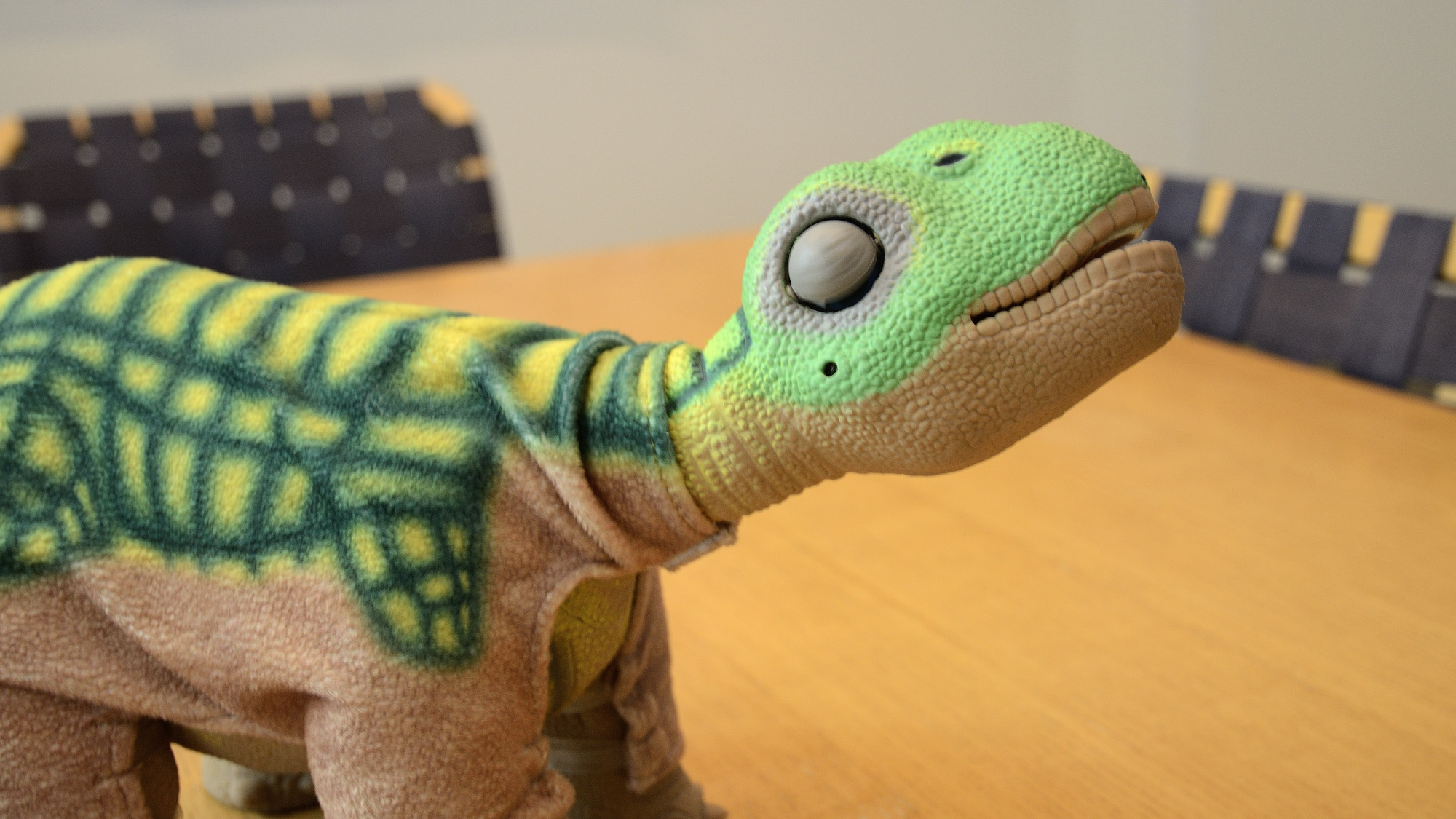 If you switch it on, it will realistically awake and move around clumsy before actively requesting attention from human bystanders.  If you, for example, touch a PLEO rb, it will cuddle against your hand. It furthermore masters a rich variety of sounds for expressing emotions like comfort, hunger, pleasure or fear. If you neglect it or if it is hungry, it will even start to cry like a baby. Needless to say that it can be fed with special plastic leaves to fill its empty stomach if needed. All in all the PLEO rb is a toy robot that is quite good in pretending that it is not a robot and makes the users feel engaged with the robot. 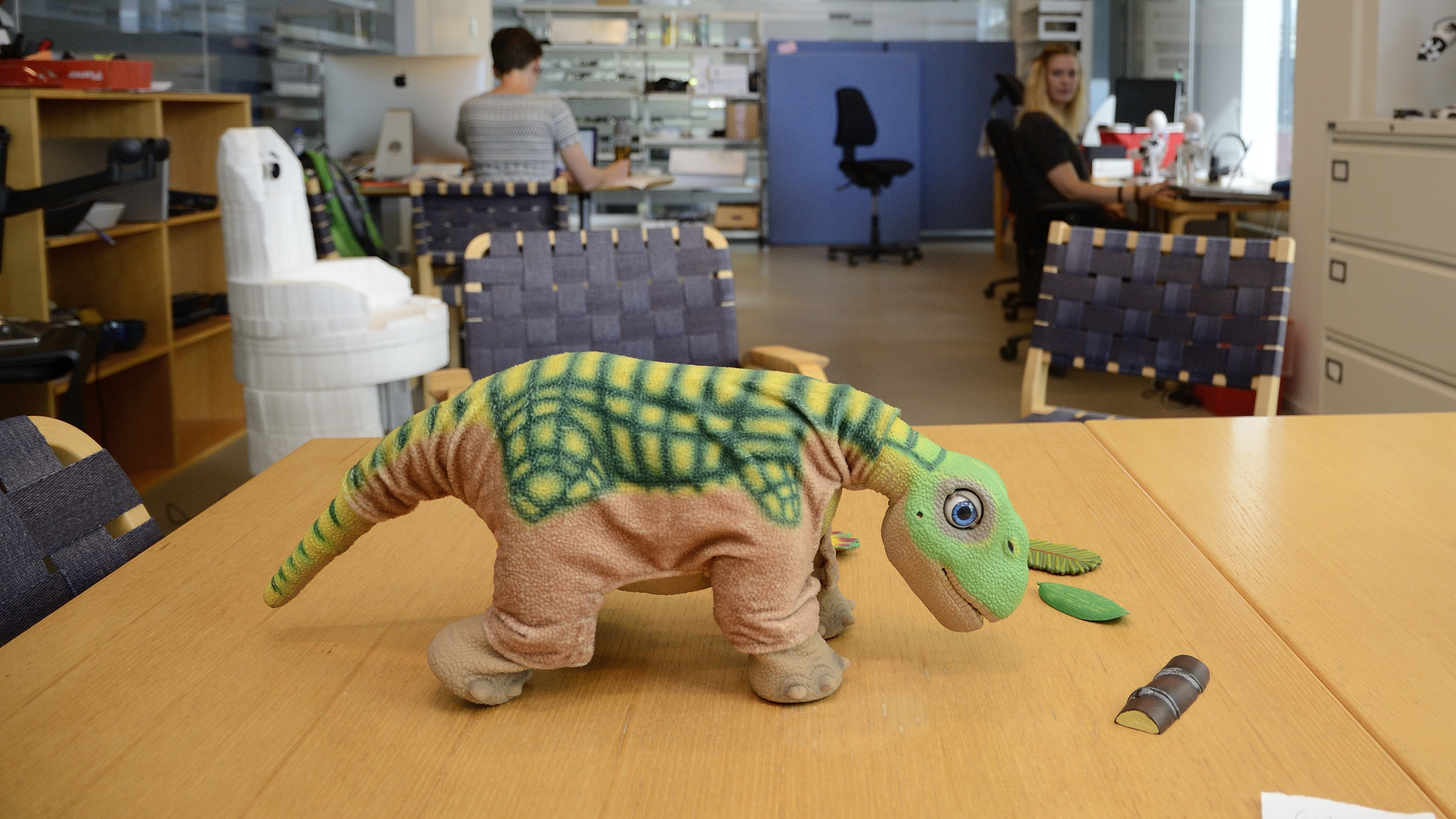 Pleo rb will actively try to get human attention after being ignored for a certain amount of time.

The PLEO rb is a robot with various features. It has a camera-based vision system that can be used for light detection and navigation. The camera can detect colours, patterns, and even steps and edges, which prevents the robot from falling from tables. Two microphones enable binaural hearing, the robot can turn its head when you speak to it. An integrated beat detection enables the robot to dance and to react to music. With 12 touch sensors on the head, chin, shoulders, back and feet the PLEO rb can detect touches very well.  It has touch sensors on its feet, too.

All in all 14 different joints enable the robot to perform natural motion sequences. Each joint is equipped with force-feedback sensors which support realistic movements and adaptations of the PLEO rb to its surroundings. An orientation tilt sensor informs the controlling unit about the body orientation of the robot. Several infrared modules provide an infrared detection for objects that the robot has in its mouth. Infrared communication with other robots and an infrared detection for external objects is also possible.