SMOOTH Project: Developing A Support Robot for the Elderly

Rosalyn Melissa Langedijk is a PhD Student in the Department of Design and Communication. Her main research areas are Human-Robot Interaction, Persuasive Dialogue and Healthcare Robots. In the interview she explains how research on a healthcare robot works in practice. 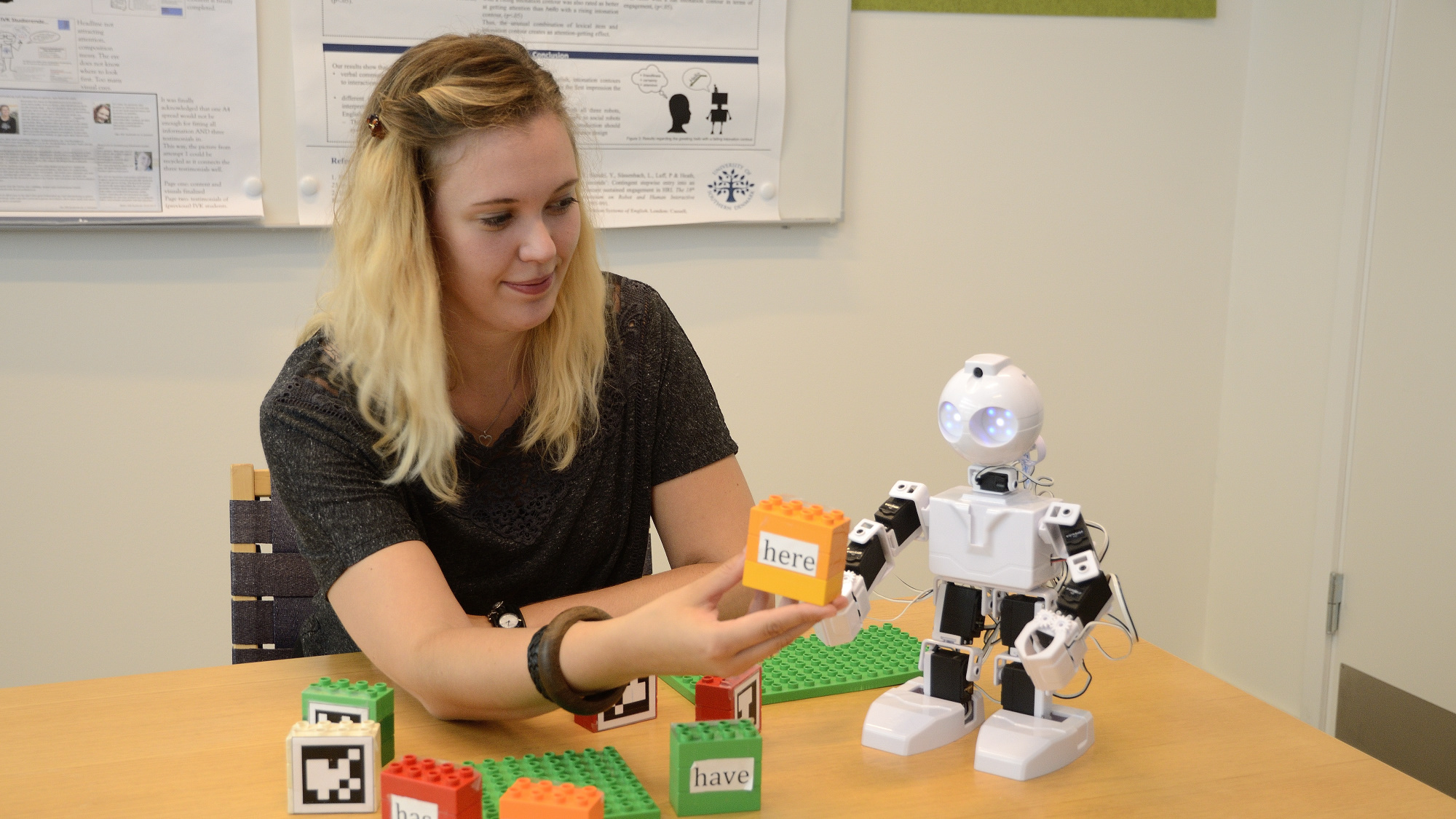 Hi Rosalyn, can you give a short introduction of yourself and an overview about the SMOOTH project?

My name is Rosalyn Melissa Langedijk, I am from the Netherlands and PhD student in the Department of Design and Communication at SDU Sønderborg.

I am currently working in the SMOOTH project. SMOOTH is short for Seamless huMan-robot interactiOn fOr THe support of elderly people. The aim of this project is to develop a support robot for residential care homes. The robot will support the staff in taking care of the elderly.

What kinds of tasks will the SMOOTH robot take over?

Can you provide a practical example for such a use case?

Let’s take the drink serving use case. This targets a common problem in the care of elderly people. With progressing age, the sensation of thirst is reduced. For this reason many old people do not drink sufficient amounts of liquids. Consequently, it is a part of the caregivers’ job routine in residential care homes to continually remind or convince residents to drink. This task is time-consuming and repetitive. It is well suited for being taken over by a robotic helper. This robotic helper can remind the elderly to drink more during different kinds of social interactions and create novel opportunities for socializing. 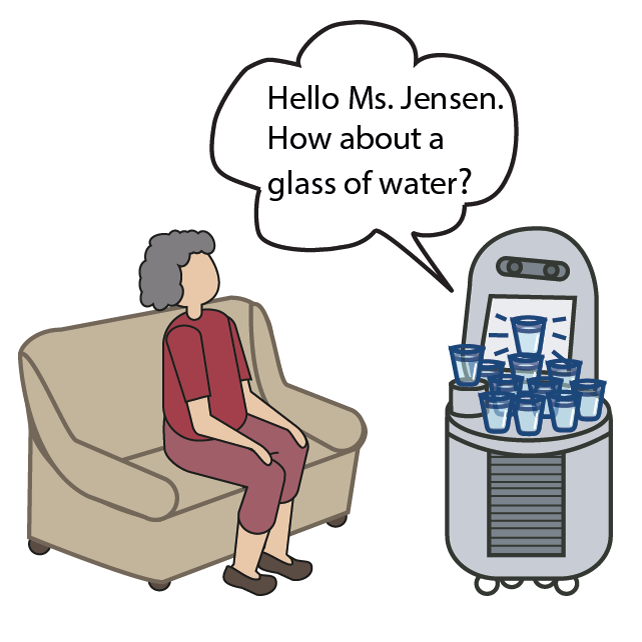 Serving fluids: The robot will provide water and other drinks to elderly people and encourage them to drink more. (Illustration by Danish Technological Institute)

What is the general structure of the SMOOTH project?

The SMOOTH project is running from April 2017 to October 2020 and is primarily funded by the Innovation Fund Denmark with almost 11 million DKK. The total budget of the project is  19.3 million DKK. The project consortium consists of seven members, including four research and/or educational institutions. These are Syddansk Universitet (SDU), University of Hamburg,  Fraunhofer Institute for Manufacturing Engineering and Automation IPA and the Danish Technological Institute. With Robotize and Dictus two industry partners are involved as well. The municipality of Køge supports the project by facilitating the contact to the residential care institution Ølby Ældrecenter. So all in all, it is a big project with many different contributors, each with different kinds of expertise.

What is the role of SDU Sønderborg in SMOOTH?

In the Human-Robot Interaction Lab at SDU Sønderborg, we are generally focussing on the communicational aspect of the interaction between robot and user. The focus of my work is persuasive dialog. The other two areas which are covered by our group are the effects of responsivity of robot behavior and the role of incremental speech processing and synthesis.

Which robot hardware do you use for your experiments?

We have different robots for different purposes, and depending on the purpose of our experiments we decide what robot fits best. For the SMOOTH experiment we are currently working with a modified version of the so-called TurtleBot. This is a motorized and remotely controlable robot, which can be easily adjusted to different tasks. Our model has a styrofoam cladding on top and is used for guiding participants and for carrying objects for the participants in our experiments.

Does your TurtleBot have a name?

I added some big eyes for personality and named it Casper. With a little imagination, there is some resemblance with the friendly ghost in the cartoon. Casper is an early prototype which we built for our own experiments. 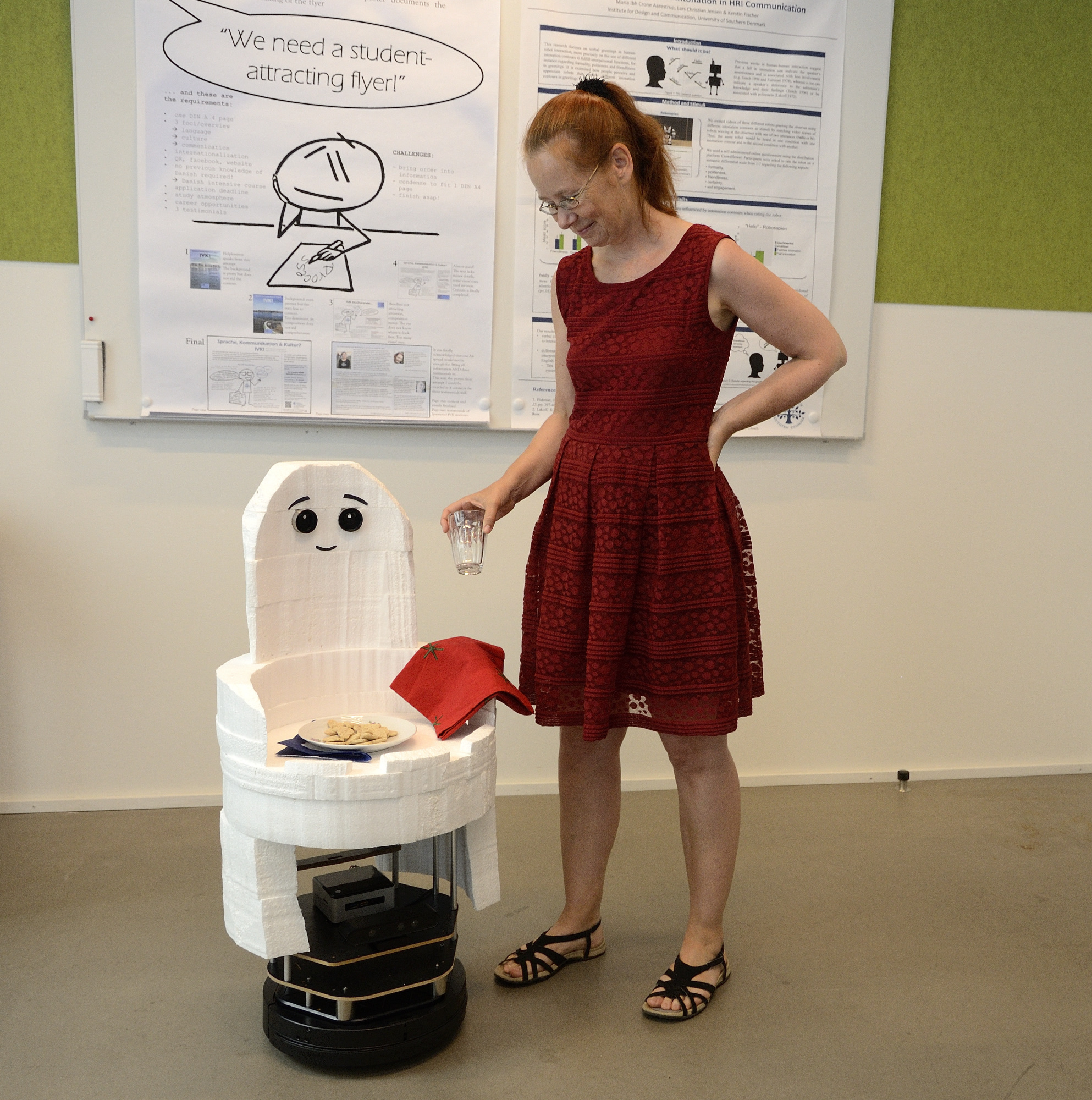 Kerstin Fischer shows the collected items for this experiment and how these can be put on Casper.

Will the final robot resemble Casper?

Having Casper enables us to start with our experiments while the official prototype is still under development.This saves precious time. In a big project like SMOOTH, a lot of things have to be done simultaneously.

Do elderly patients actually accept a robot as communication partner?

Yes, they do! In our last experiment for SMOOTH, it worked quite well; even an early prototype like Casper is often dealt with as if it was a person. It will be exciting to see how the elderly people and the staff will react to the official prototype when it is available at the elderly care facility, the Ølby Ældrecenter.

What was that experiment for SMOOTH about?

It was my very first experiment in this project, and I was really excited about it! We used Casper for an object-carrying-and-finding scenario where we developed a realistic dialog with different conditions to test. We hypothesized that the more personalized the utterance, the more persuasive the dialog will be. For this reason we tested how much water people drank when a robot told them about the importance of water intake. The robot told people in different ways and we then measured the individual effects of the different utterances.

What earlier research did you base your experiment on?

Our experiment is based on a persuasion study done by Robert Cialdini. He describes six principles of persuasion. These are commitment and consistency, liking, reciprocation, authority, scarcity and last but not least social proof.

Which of these principles did you use for your experiment?

We used social proof for the experiment. It means that you look at what others do to decide what you will do yourself.

What was the experimental set-up?

Our robot Casper guided people through the lab and told them where to find dishes, table cloth, cutlery etc. for setting up the table and carried these objects for them. Casper also suggested that people should drink water. We wanted to test if different utterances of Casper would influence people’s water intake. This was done in three conditions.

In the first condition, the robot only said: “It is important to drink enough water during the day.” This was the control group to compare the persuasiveness of the utterances in the second condition and in the third condition.

In the second condition, the robot used social proof in general. It said to the participants: “It is important to drink enough water during the day. Most participants drink half a liter after this game.”

In the third condition, the robot used gender-specific social proof. Depending on the participants’ gender the robot said: “It is important to drink enough water during the day. Most male/female participants drink half a liter after this game.” 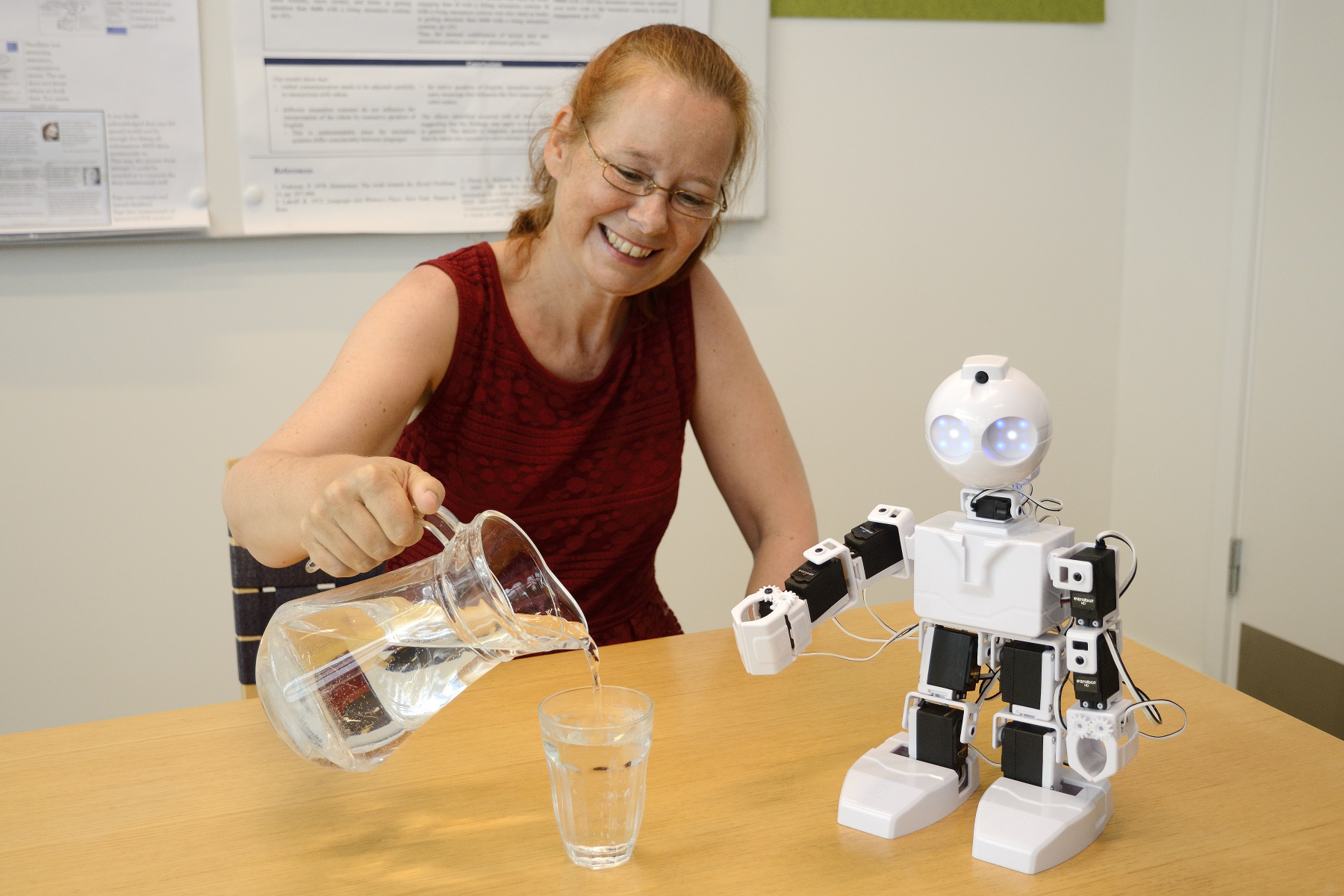 The persuasiveness of the robot's utterances is measured by the amount of water that participants drink.

How did you measure the persuasiveness of the robot’s utterances?

What were the results of this experiment?

Let’s start with the control group (first condition) which did not hear any utterances of social proof. Here people drank on average 55ml of water. That’s a very small amount of water, just little more than an average shot glass.

In the second condition, people drank on average 73ml of water. That’s a higher water intake than the control group, but not a significant increase.

A 3D animation demonstrates a possible design for the final care robot. (Screenshots taken from the video The SMOOTH robot)

How did you interpret these results?

The results of the first condition constitute the reference point for the comparison since they show people’s water intake if the robot’s utterance does not include any social proof.

In comparison with the baseline condition, the results of the second condition show that general social proof may have an influence on people's water intake, but the difference could be due to chance.

In contrast, the results of the third condition show that the use of gender-specific social proof has a significant effect on people’s water intake. This is a very interesting result. It shows that a single personalized utterance – here the reference to other participants of the same gender – can have a considerable effect on the persuasiveness of the robot.

How would you sum up your findings on persuasiveness in robot’s utterances?

So, to sum up, the more the robot takes a communication partner into account and personalizes the utterance, the more persuasive is the dialog. These findings are in general helpful in the development of healthcare robots.

For the SMOOTH project, these are important findings, because they show how to help caregivers in their daily work of reminding and convincing the elderly to drink.

Rosalyn, thank you very much for the interview!

This interview had been conducted  by Sascha Steinhoff in Sønderborg, 5th of September 2018.