Keep dangerous gasses and aerosols away

Working in a fume cabinet:

Polluted air is removed most efficiently when the pollution source is located towards the back of the fume cabinet. Shelves and tables create turbulence, so should be avoided. The user can not fail to affect the airflow, so move slowly and smoothly to avoid pulling contaminated air out into the lab.

All BI's hoods are equipped with an alarm that sounds/lights if the suction is not satisfactory. The alarm is triggered if the pressure difference between the exhaust duct and the laboratory is less than a preset value. There are alarms displayed by several different manufacturers.

Meanings of the lights on Glent Novenco, Glenco ES 369:

Requirements for the hood:

The airflow in a fume cabinet must be sufficiently high to remove contaminants from the cabinet, but not be so high as to create turbulence which pulls contaminated air out of the hood.

The Health and Safety Authority recommends that the air velocity in the hood opening is 0.5 m/s, when the opening is about 40-50 cm.

When the opening is smaller, air velocity in the opening increases. This may cause problems due to turbulence. So-called automatic regulated hoods attempt to avoid this problem by keeping the air speed in the opening constant, regardless of sash height. Some of BI's hoods already have stepless regulation and all new hoods must have this form of variable air flow control. 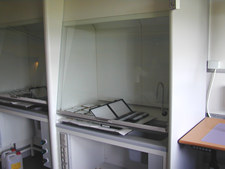 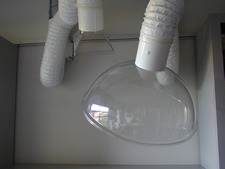