Life of the famous Renaissance astronomer: Tycho Brahe and his wife ate lots of fish

Chemical analyzes of bones reveal that the Danish astronomer Tycho Brahe and his wife ate lots of fish. Specifically, freshwater fish from stagnant pools on a Danish island and in the Czech Republic.

The great renaissance astronomer Tycho Brahe was a man we know a great deal about today: He paved the way for a new approach to astronomical science and built two observatories on the Danish island, Hven. He had his nose chopped off in a duel with a distant relative; he was obese and he was not poisoned with mercury, as rumour had it.

And now we also know that he and his wife, Kirsten Barbara Jørgensdatter, ate lots of fish - the posh and more expensive species of fish. 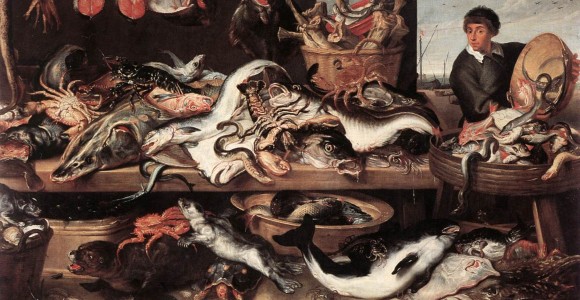 According to this painting of a fish market from early 17th century by Frans Snyders, people in the Renaissance ate many different animals from the ocean. Tycho Brahe preferred freshwater fish.

This is the conclusion from Professor of archaeometry, Kaare Lund Rasmussen from the University of Southern Denmark after analyzing small pieces of bone from the Renaissance couple.

No cod, no herring, no seal

In 2010, the couple's coffins, which are today kept in a church in Prague, were opened by a Danish-Czech research team, and samples of Tycho's and Kirsten's femur bones were taken. They have now been analyzed by the researchers, and the findings are published in the journal Heritage Science.

The bone analyzes reveal a number of details about the couple's eating habits in the ten years that preceded their death in 1601 and 1604:

1. None of them got very much protein from the sea, ie. they ate almost no saltwater fish or marine mammals such as seals.

2. In return, they consumed lots of freshwater fish.

3. These freshwater fish did not come from rivers and streams with flowing water, but from ponds and lakes with stagnant water.

4. Such quiet lakes or ponds could be the ponds that Tycho Brahe himself had constructed on the Danish island Hven, where he also build the observatory Uraniaborg. Another point of origin could be the large artificially landscaped lake at Rozmberk Castle near Prague, where Tycho and Kirsten lived until their deaths. - The analysis results fit well with the historical knowledge we have about the couple, and on that basis we can give a fairly qualified guess as to which lakes and ponds have delivered fish to the astronomer and his wife, says Professor Kaare Lund Rasmussen.

Tycho and Kirsten spent most of their time on the Danish island Hven in the period 1576-1597. On the island were almost 60 connected freshwater ponds with different species of freshwater fish that Tycho Brahe had laid out.

- It is probable that Tycho and Kirsten have eaten lots of fish from these ponds, says Kaare Lund Rasmussen.

In 1599, the couple moved to Bohemia (present-day Czech Republic) - first to Jizerou 50 km from Prague and then, in 1600, to Prague.
At that time, fish farming had become widespread in Bohemia. It is estimated that at the end of the 16th century, up to 75,000 fish farms existed in Bohemia and Moravia, producing 4-6,000 tons of fish a year; especially carp.

For example, a castle near Prague had a huge fish farm belonging to the aristocratic Rozmberk family.

- This fish farm, which was almost 5 square kilometers in size and had an average depth of six meters, may well have supplied fish to Tycho and Kirsten Brahe, says Kaare Lund Rasmussen.

Tycho Brahe died at the age of 54, 11 days after attending a banquet. Stubborn rumors had it that he had been poisoned by mercury, and when scientists in 2010 gained access to his earthly remains, one of the tasks was to confirm or disprove this rumor.

Investigations revealed that Tycho had not ingested any mercury before his death.

There were, in turn, surprising traces of gold in his body. Maybe a result from his work as an alchemist, maybe because he dined with gold cutlery and drank from gilded glasses.


How do the researchers know that the fish came from stagnant water?

If Tycho and Kirsten ate such a fish, it would be revealed in a carbon-14 analysis of their bones that they had ingested organic material older than themselves and the fish they have eaten.

The analyzes did NOT show this, and one explanation may be that the freshwater fish that Tycho and Kirsten ate did not live in water that was enriched with organic material from the riverbanks via erosion - the water must have been stagnant.

Kaare Lund Rasmussen is professor at Department of Physics, Chemistry and Pharmacy. Over time, he has performed a number of archaeometric analyzes of Tycho Brahe's bones, teeth, head hair and beard hair.

Analysis of Tycho Brahe's eyebrow hairs reveal that the Renaissance astronomer was full of gold.