Francesco Sannino, professor of theoretical physics at the University of Southern Denmark, estimates that we will see the Danish coronavirus curve turn this week or next.

Over the next two weeks, the number of new COVID-19 cases per day will fall. This is the estimate by Professor Francesco Sannino at the University of Southern Denmark, SDU.

However, according to him, this depends on the Danish population sticking to the current restrictions put forth by authorities.

I would warn the authorities against starting to relax their restrictions before the total number of infections has reached a plateau and the situation has stabilised. Actually, applying a precautionary principle, restrictions should not be relaxed until we have seen a sharp decline in the number of new hospitalisations.

Together with colleagues Michele Della Morte, also from SDU, and Domenico Orlando from INFN in Turin and the Albert Einstein Center in Bern, Francesco Sannino has developed a model that can estimate the projection of the overall number of coronavirus infections with a 90 percent certainty.

The model compares data from around the world and has been tested at various stages of the development in different countries – for example Italy.
This has led to a model that can, with an acceptable precision, project a development within a span that is 90 percent likely to be correct.

Therefore, the researchers have now used the model to make projections for developments in, among other countries, the UK, France, Spain, the USA and now Denmark.

The curve will turn

With a 90 percent certainty, the number of new infections per day will peak in Denmark by Easter Sunday, 13 April 2020. 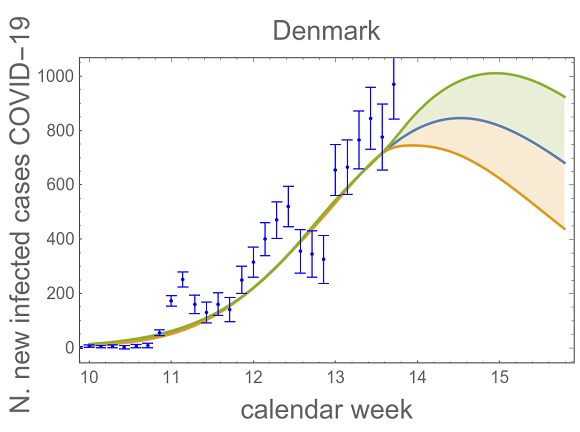 According to the calculations, around 16,000 to 21,000 people in Denmark will have been infected by the coronavirus come Easter Monday, 13 April 2020. This is also the date that the authorities expect to be the absolute earliest point of beginning to relax the current restrictions that have been imposed to slow dow the spread of the virus.

These figures are considerably higher than the number of cases confirmed by Danish health authorities. This is because the model takes into account part of the unreported cases, i.e. people who are expected to have been infected but have not been tested. The researchers expect the number of confirmed coronavirus infections to be between approx. 3,600 and 4,200 on Easter Monday, 13 April.

Up to and including 11 March 2020, Danish authorities implemented a strategy of testing people with both mild and more severe respiratory symptoms. As of 12 March, authorities began testing only people with severe symptoms requiring hospitalisation. This change in the test strategy is taken into account by the model and results in a difference between estimated and confirmed cases.

All figures in the projections depend on the Danish authorities sticking to the current test strategy and the current restrictions. 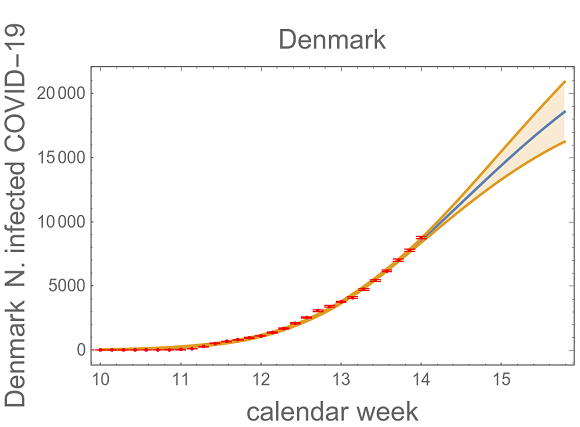 The three researchers' model is described in the scientific article On the COVID-19 Epidemic Outbreak, which is currently undergoing peer-review, where scientific scholars review the article and evaluate the quality of the research.

The projections from the model are updated daily and can be followed at www.cp3-origins.dk/covid-19.

Francesco Sannino is a professor of theoretical physics at SDU and director of the Centre for Cosmology and Particle Physics Phenomenology.