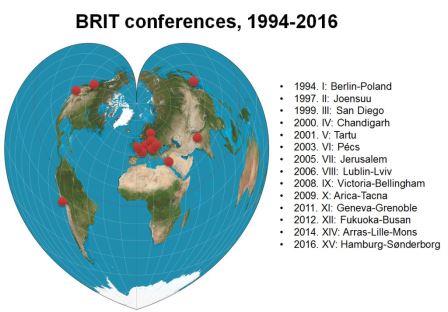 BRIT Conferences
Since 1994, the Border Regions in Transition (BRIT) Conference is one of the leading international scientific conferences on interdisciplinary research on borders and borderlands. Meetings have been held in such diverse locations as Berlin (1994), San Diego (1999), Jerusalem (2005), and Fukuoka-Busan (2012). Following the conference organized between Arras, Lille and Mons in 2014, BRIT2016 is the 15th edition of the conference.
Theme of the conference
The emergence of a much more integrated world has challenged some of our most fundamental assumptions on cities, states and borders. Now that states are actively promoting the development of competitive cross-border city-regions – as in the Øresund – the classical opposition between the cosmopolitan city and the national state no longer holds true. Now that states have developed selective strategies that are supposed to simultaneously guarantee security while also enabling trade flows – as between the U.S. and Mexico –, the much-discussed contradiction between the city as a space of flows and the state as a territorial container has evaporated. And now that the external limits of territories and the internal delimitations within societies have been blurred, many cities appear at risk of being trapped by the securitization of the state and its search for exhaustiveness and exclusivity. In a world where national borders are simultaneously opened and closed, opportunities and constraints, negated and claimed, the grand theories patiently developed by border studies appear to be more fragile than ever before.
If that were not enough, it appears that the current transformation in the forms and functions of borders affect cities and city-regions differently according to their size, governance networks, and/or economic structure. As state borders have become increasingly networked, diffused, and mobile, some city-regions, like Geneva or Luxembourg, have transformed from disadvantaged spaces due to their peripheral position to prosperous interfaces. Now considered as a resource, the presence of a border allows these city-regions to develop a growth model based on the comparative advantages of several states, and reinforces their international visibility in the global competition in which they are engaged. Similar developments have been observed, for different reasons, in some parts of Africa, where border towns have mushroomed due to the ability of local traders to exploit border differentials, and in Asia, where transfrontier metropolises such as Singapore or Hong Kong are highly integrated to the global economy.
Elsewhere in the world, the benefits of free-trade are often being more than outweighed by the re-bordering of national borders, which allows states to control movement and avert subversion. From the walls that are supposed to divide Israelis and Palestinians or the United States from Mexico, numerous ramparts, citadels, glacis walls and custom posts are experiencing a resurgence, dividing or isolating the city and recreating the fiction of a harmonious accord between territory and identity. Many small border cities, as well, have struggled to transform their geographically peripheral situation into an advantage. Even in Europe, where it seems at first glance that the main challenge for cities is to minimize the remaining obstacles that could slow regional integration, numerous small urban centers still turn their back on the border.