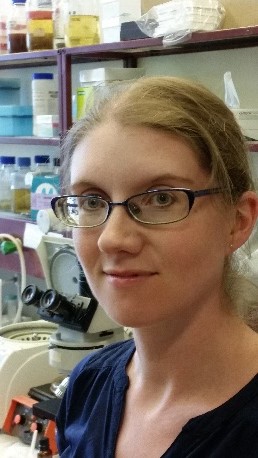 Clare Kirkpatrick obtained her PhD in 2006 from the Department of Genetics, University of Cambridge, UK. After postdoctoral work in the laboratories of Prof. Claes Wollheim and Prof. Patrick Viollier at the University of Geneva, Switzerland, she obtained a Marie Heim-Vögtlin career development grant from the Swiss National Science Foundation in 2015 to apply high-throughput chemical genetic screening to investigate cell polarity regulation in Pseudomonas aeruginosa. In 2017 Clare joined the  Department of Biochemistry and Molecular Biology of SDU as an Assistant Professor.

Molecular genetics of cell asymmetry in alpha- and gamma-proteobacteria

Despite their homogeneous appearance, bacteria often localise proteins or protein complexes to specific areas within the cell. The function of the proteins or complexes depends on this localisation, for example, bacteria with a single flagellum localise it to one pole of the cell in order to swim. In general terms, the ability of rod-shaped bacteria to differentiate the poles from the body of the cell, and one pole from the other, is fundamental to a wide range of processes ranging from chromosome segregation to motility to virulence. We are particularly interested in the asymmetry-determining mechanisms of the alpha- and gamma-proteobacteria, as these classes of bacteria contain many clinically and agriculturally important pathogens. We use Caulobacter crescentus and Pseudomonas aeruginosa as model organisms and study aspects of their asymmetry or polarity-determining mechanisms using a combination of powerful classical genetics, genomics including Tn-SEQ and high-throughput chemical-genetic screening (in collaboration with the NCCR Chemical Biology, EPFL, Switzerland). We are also interested in RNA-degrading toxin-antitoxin systems and their roles in post-transcriptional gene regulation.

Regulation of the bacterial cell cycle and SOS response by the toxin-antitoxin system HigBA in Caulobacter crescentus
HigBA is a stress-responsive toxin-antitoxin system found in many bacteria where under normal conditions the antitoxin HigA inhibits the RNA-cleaving activity of the toxin HigB. Conversely under stress conditions (e.g. starvation) HigB becomes active and causes growth inhibition. Previously we discovered that the HigBA orthologue of Caulobacter crescentus did not respond to general stress as reported for other bacteria, but instead was strictly under the control of the DNA damage (SOS) response, and that instead of causing growth inhibition it appeared to mediate a DNA damage-inducible cell death mechanism. Moreover, we were able to map to single base pair resolution the RNA cleavage sites of HigB, and discovered that among its targets was the master cell cycle regulator CtrA, suggesting that HigBA can act on the cell cycle. The current evidence suggests that HigBA may act as a regulatory node with input into the cell cycle control and DNA damage response of the cells, and we are currently seeking to understand the molecular basis of this regulation and define its functional importance in vivo. Approaches we will take to solve this problem will include mapping of HigB cleavage sites in a mutant strain with constitutive induction of the SOS response, to see if the cleavage pattern differs from the control dataset that we already have, high-throughput chemical screening of strains with HigB partially active, hyperactive or absent to identify any HigB-dependent differences in susceptibility to DNA damaging compounds, and classical bacterial genetics and cell biology to investigate whether HigBA affects the kinetics of the master cell cycle regulators of Caulobacter either under control or DNA damage stress conditions. 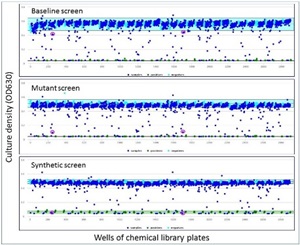 Chemical-genetic and genomic synthetic lethal screening of polarity mutants of Pseudomonas aeruginosa
The opportunistic pathogen Pseudomonas aeruginosa develops flagella and pili at its cell poles, both of which are important for motility (and by extension, its ability to find new niches to colonise and establish infections). However, although the polar localization is required for them to function properly, relatively little is known about the repertoire of polarity factors which control the localization, and how they interact with each other. We previously looked for chemical-genetic interactions between polarity factors of Pseudomonas aeruginosa and a 1280-compound chemical library by growing mutant and wild type cells in the presence of the library compounds and filtering the data for compounds that were either more or less toxic in the mutants than they were in the wild type strain. 4 compounds were identified that had differential effects on the polarity mutants. We now plan to map synthetic lethal genetic interactions between polarity factors by carrying out Tn-SEQ and identifying candidates for synthetic lethal genes (or alternatively, synthetic beneficial suppressors) of the polarity factor mutants. This will then be used as a control dataset for comparison with Tn-SEQ experiments where DNA is extracted from a pool of transposon mutants grown with the compounds identified as hits from the chemical screen, as a first step to identify the molecular mechanisms responsible for the polarity factor dependent drug susceptibility. 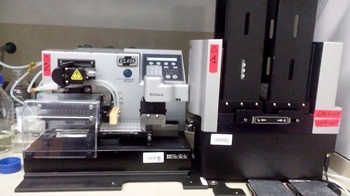